Soane and Gandy are a fascinating pair, sharing a melancholic frame of mind and a morbid fascination with what Horace Walpole called “gloomth”. If Soane was the more gifted architect, Gandy was the more talented artist; in fact the younger man’s election as an Associate Royal Academician was as an artist rather than an architect. Still, the two men achieved a kind of symbiotic relationship that led to some of the most memorable representations of their respective gifts, and it’s a moot point how much Soane’s architectural style was influenced by Gandy or vice versa.

The Soane Museum is fortunate to have an abundance of Gandy’s works, but one of the most intriguing is also one that has been among the most inaccessible as it hung until recently in the Picture Room Recess. This work, which presents Soane surrounded by his works, speaks to Gandy’s adeptness in conjuring up an artificial world, much like the Grand Tour recreations of antiquity by Giovanni Paolo Panini, and it can be read as an extension of the same nostalgia that motivated Soane’s collection of antiquities. The connection with the world of Panini is even more explicit with a “riff” on the theme of a Soane retrospective exhibition.

The setting is based upon an expanded version of the diminutively proportioned Picture Room with its distinctive ceiling of “arched canopies” as Soane termed them and clerestory lighting that direct shafts of sunlight onto the room below. Three-dimensional models of the Bank of England are highly visible here as are models for Soane’s London churches, the Tyrringham gate lodge, and Eliza Soane’s tomb while the paintings represent a mixture of public and private commissions, much as in the earlier watercolour of 1818. In the corners one spies the striking Anglo-Indian chairs that Soane acquired around the time that the Picture Room was underway, and the whole has an element of wish-fulfillment reminiscent of Gandy’s utopian expansion of the façade of No. 13 Lincoln’s Inn Fields to embrace numbers fourteen and fifteen. 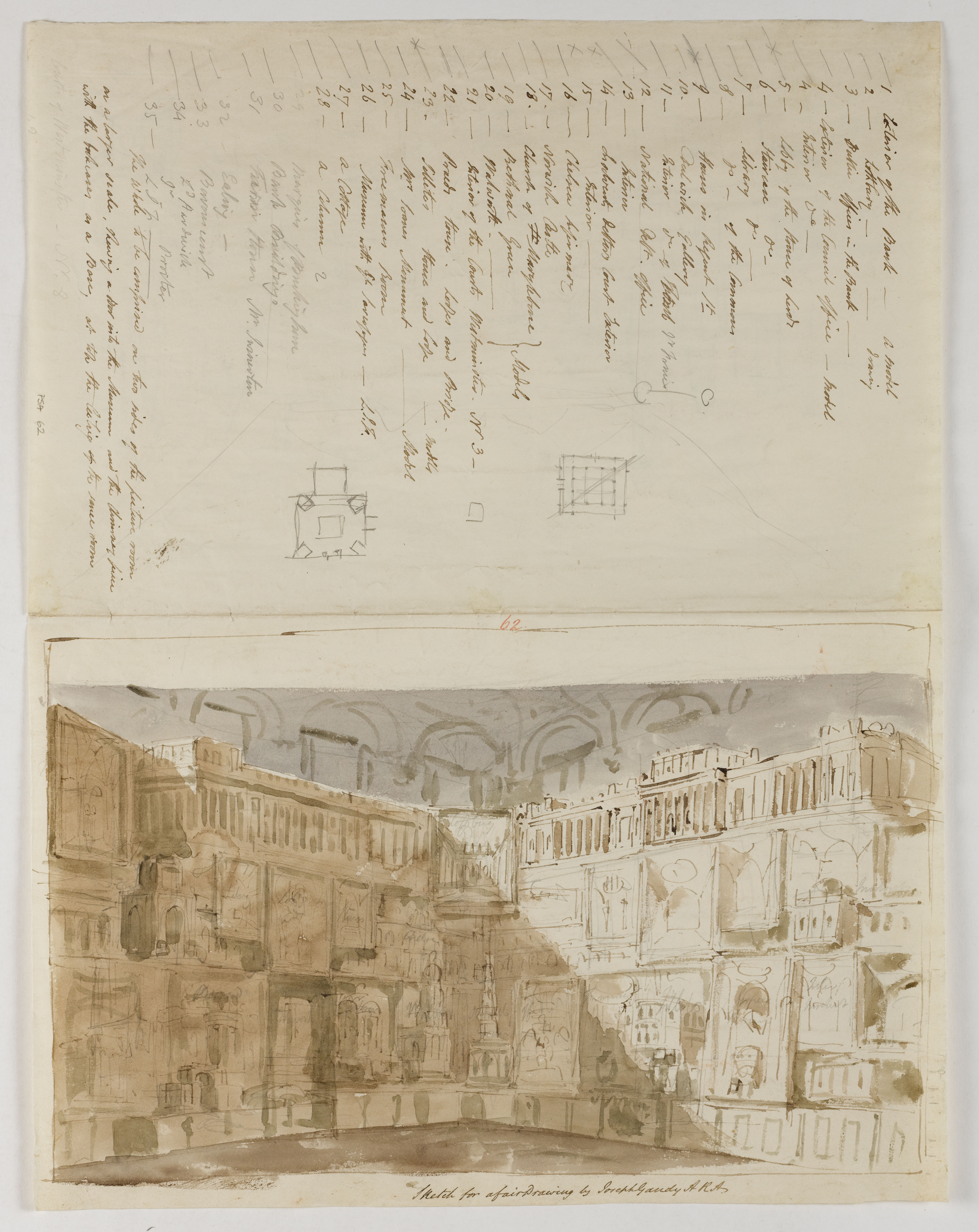 Like the more celebrated Public and Private Buildings Executed by Sir John Soane between 1780 and 1815 (P87, exhibited, RA, 1818), this one also has a preparatory sketch with an accompanying list of buildings included (Vol. 83/62), which raises the question to what extent Gandy was catering to Soane’s vanity or acting under instructions?