As a trainee cataloguer of architectural drawings, I catalogue the drawings made by Soane’s office for three London churches, built as part of the Church Commissioners Act (1818). In this article, I look at Soane's drawings for Holy Trinity, Marylebone.

In 1820, Soane received his first church commission under the Church Commissioners Act (1818). It was Holy Trinity, Marylebone. However, after two years of bickering between the Marylebone vestrymen and the Commissioners over the site of the church, and the first set of Soane’s classically-inspired designs in 1823 being over-budget — £23,400 against a £19,041 grant — nothing had been accomplished.

Perhaps frustrated over the delay, and the exorbitant Soane estimate, in 1824 the Marylebone vestrymen pushed the Church Commissioners into demanding a Neo-Gothic design instead. The Commission reluctantly agreed to the demand, and asked Soane to prepare a Gothic design to cost no more than £20,000, and to hold 2,000 parishioners. Soane, typically a Neo-Classical architect, responded that any new designs would take time to prepare, and pleaded with the Commission to let him explain the original Classical design, as he felt they had ‘misunderstood’ his intentions. 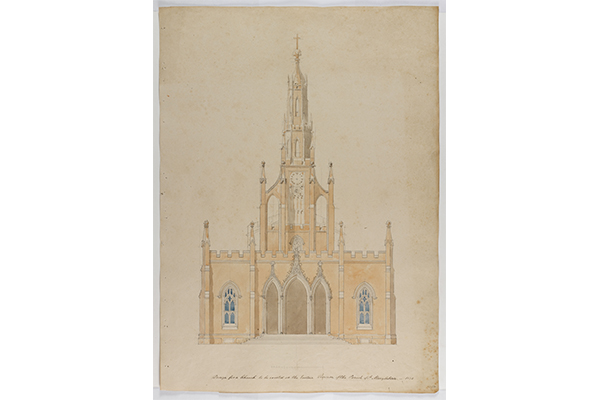 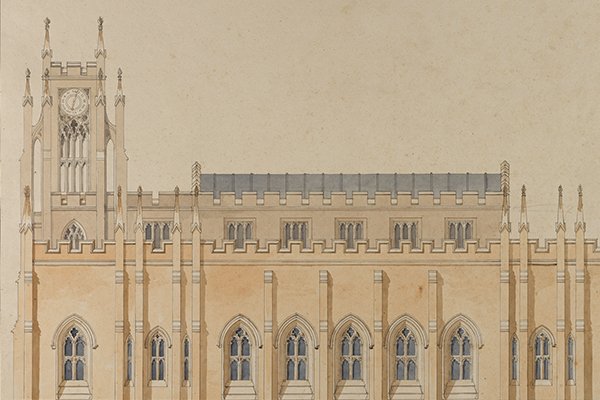 Nevertheless, the Soane office produced seven designs for a Neo-Gothic church: four are held in the Soane Museum, and three are held in the Victoria and Albert Museum. Here are two elevations for his Neo-Gothic design: one frontal and one from the side (Figs. 1, 2). In form, these designs closely resemble his Classical versions but with a Gothic overlay (Figs. 3, 4). By comparing the two designs we see: the Classical columns on the sides are now replaced by buttresses, the front is comprised of a three-arched entrance with elaborate crocketed finials as opposed to a four-columned portico; the arch-topped windows are now tri- or quatrefoil versions, square-topped crenellations run along a previously flat roof line, on the tower, the Ionic columns supported by their own broken pediment are now transformed into flying buttresses, and a cross surmounts the dome as opposed to a typically Soanean pinecone finial. 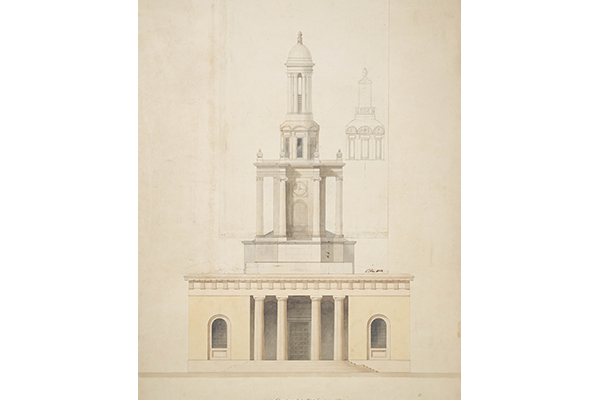 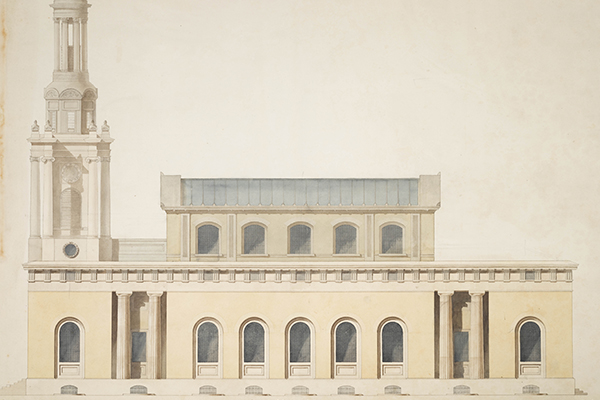 Soane had a chequered relationship with the Neo-Gothic, which was becoming a favoured ‘National Style’ by the 1820s. He admired true medieval Gothic, but had reservations concerning the Gothic Revival. Nonetheless, he had previously worked in the Neo-Gothic style, for example in 1805-6 he designed a ‘Gothic’ library for Lord Buckingham at Stowe; and more contentiously due to it corresponding chronologically with Holy Trinity, Soane was also being forced by Parliament to change his Neo-Palladian exterior to the New Law Courts at the Palace of Westminster to a Neo-Gothic version. 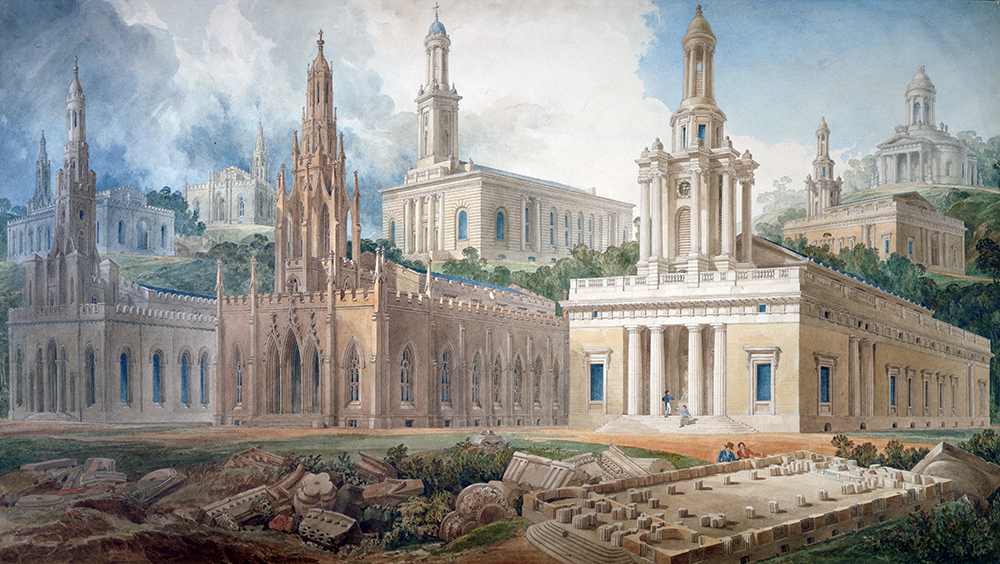 Eventually, Soane — much to his relief — convinced the Commissioners to persist with his Classical design; but work would not start until November 1825, after it was decided, unanimously this time, to re-orientate the church along a north-south axis rather than from east to west.

However, the Neo-Gothic version was not forgotten: it appeared in an 1825 watercolour consisting of a variety of church designs, which were was exhibited at the Royal Academy, as well as a variant lecture drawing made for his students at the Royal Academy (Fig. 5).

You can browse the Soane Museum's vast collection of drawings online, as well as other objects in the collection, on our Collections Database.