‘A Monstrous Excrescence’ or Stroke of Genius: The Tower at St John’s, Bethnal Green, London

As trainee cataloguer of architectural drawings I am cataloguing around 300 drawings for Soane’s three London churches built as part of the Church Commissioners Act (1818). In this article I examine St John's, Bethnal Green.

In earlier designs dating from 1825 Soane planned a typical three-tiered tower [Fig. 1] similar to his other churches: a wide base on the roofline upon which sits the first tier with a shuttered Louvre below and a clock-face above, with supporting columns topped with typical Soane caps. The second tier is short and rusticated with a round-topped lancet window, and the third tier is cylindrical with Corinthian pilasters and another lancet window. Above is a round dome which is surmounted by a weathervane. However, to the right is an alternative design: the third tier is removed with the dome and weathervane now placed atop a slightly enlarged second tier. 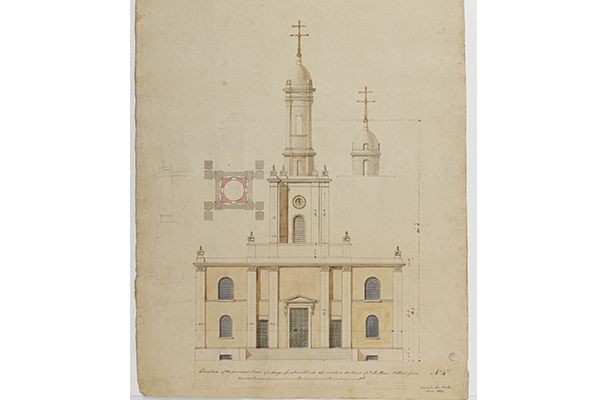 In January 1826, Soane produced elevations of the front and side of the church [Figs 2-3], and a combined elevation, section and plan showing the truncated tower [Fig. 4], which caused alarm. One critic begged the Commissioners to grant Soane an extra £500 to complete the tower, and another wrote to Soane equating it with ‘that ridiculous pile of rubbish’ which was John Nash’s colossal Neo-Gothic tower at St Mary’s, Haggerstone. Soane offered to donate £100 to enlarge the tower if the inhabitants contributed the rest, but none accepted. 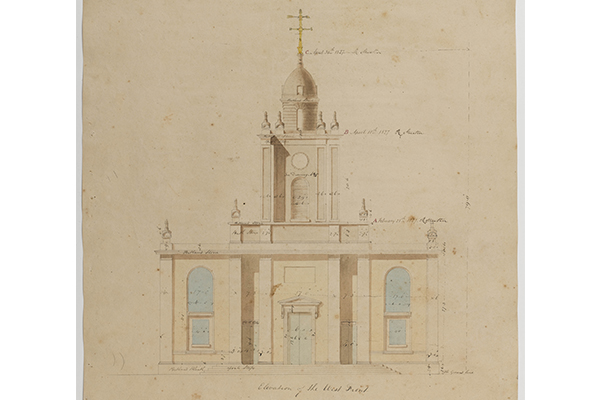 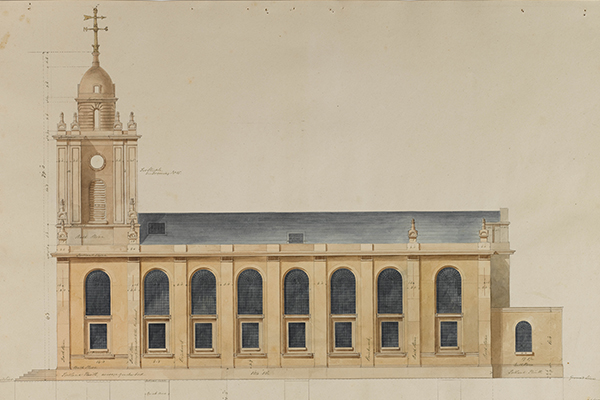 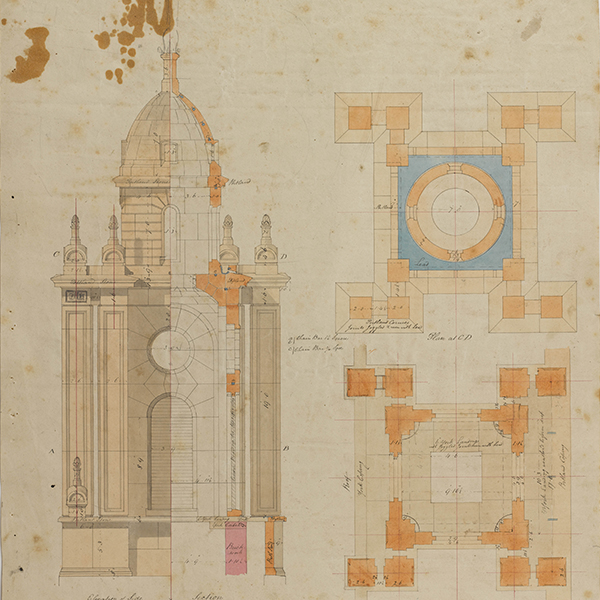 The Commissioner grant for St John’s was only £16,000 (eventually raised to £17,500), but Bethnal Green was a poor parish, so economies were needed. Notwithstanding this reality, a contemporary architectural reviewer, Edward John Carlos, started his commentary on the tower with ‘and how shall we describe appropriately this monstrous excrescence?’

Modern architectural historians have been perplexed by the tower design too, although a certain fascination remains. For example, the unusual longitudinal arrangements of the columns around the first tier: when seen from the side they appear ‘flipped-out’. Carlos noted this feature, but now the columns ‘appear to be designed to give a useless and inadequate breadth to the side view of the tower’. Nevertheless, in this century Murray John pointed to the enhanced chiaroscuro (light and shadow) effect the columns create upon the tower in this position.

Another feature of this arrangement was aligning these columns with the giant pilasters framing the main doors beneath. According to John, the tower now seems to emerge from the ground, rather than being unceremoniously plonked on the roof, and this served to enhance the verticality of the front of the church. Indeed, John argued that with a taller tower, this would have been ‘one of the greatest of Soane’s compositions’.

It is undeniable that the exterior of St John’s is idiosyncratic. Yet, it is precisely these Soanean idiosyncrasies, or indeed inventiveness under financial pressures that make St John’s such a fascinating church.