At a convened meeting on 15 November 1821, John Soane Esquire was formally elected a Fellow of the Royal Society. He had been supported for election by nine Fellows and his certificate had been read out at the requisite ten weekly meetings before that, indicating that he was ‘likely to prove a useful and valuable Member’ (Fig.1). The election occurred one year after the death of Joseph Banks who had reigned as President of the Society for the previous 42 years. During the previous decades and into the 1820s, the Society had become more of a club for aristocratic and wealthy Fellows, whose scientific connections were relatively minimal, instead of any contributions they might make to natural knowledge. Scientific energy was represented more overtly by meetings and research taking place at the Royal Institution in Albermarle Street where Humphrey Davy and Michael Faraday had started working. 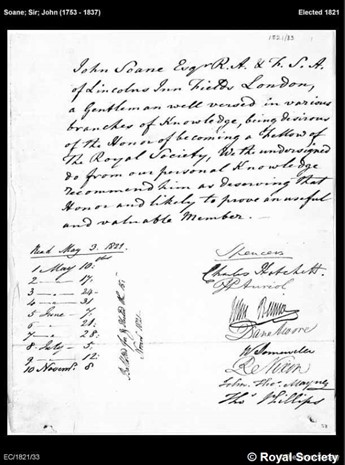 “John Soane Esqr RA & FSA of Lincolns Inn Fields London, a Gentleman well versed in various branches of Knowledge, being desirous of the Honor of becoming a Fellow of The Royal Society, We the undersigned do from our personal Knowledge recommend him as deserving that Honor and likely to prove an useful and valuable Member."

Soane registered his scientific interest as ‘antiquarianism’. There is little record of his contribution in terms of papers to the Society’s long-standing publication, The Proceedings of the Royal Society. Nevertheless, it is clear that he valued his Society fellowship highly, for F.R.S. is included on his tomb inscription in St Pancras Gardens. He also set up the 1833 Act to bequeath his house in Lincoln’s Inn Fields and its contents with a Fellow of the Royal Society as an obligatory, or Representative, member of the Board of Trustees.

Accordingly, at Sir John Soane’s death in 1837, (he was knighted in 1831), the first representative Royal Society Trustee on the Board was Alexander Douglas, the Duke of Hamilton, a Whig MP who had a stated interest in Egyptology. In fact, his dedication to the subject was such that he stipulated in his will that when he died he should be embalmed and buried in a sarcophagus (a request duly carried out). As a further connection, he was Grand Master of the Freemasons of Scotland at the time of Soane’s election and, as a Trustee of the British Museum, he seems to have been well equipped to shepherd Soane’s gift to the nation through its early years.

The Duke of Hamilton was succeeded in 1852 by Philip Grey Egerton (Fig.2), again an individual with aristocratic roots, but who had been elected a Fellow in 1831 for his ‘various acquirements in Natural History and particularly in Geology’. 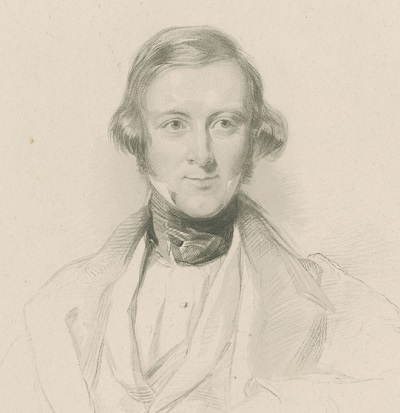 Egerton was part of the movement which eventually led to Fellows being elected for their scientific qualities rather than social position. He held his appointment as a Soane Trustee for the next 29 years, along with being a Trustee of the British Museum. The Royal Society clearly did take an interest in Sir John Soane’s Museum, for Egerton’s appointment letter as a Trustee is in the Society’s archive.

From the 1880s onwards the succession of Representative Royal Society Trustees have usually been professional scientists with an established position in a University or as a Museum Director. This was the case for the zoologist Professor Sir William Flower, Director of the Natural History Museum between 1884-98, and who succeeded Egerton. Amongst successive appointments, in keeping with the principle that a Trustee’s interest should overlap with the Soane collections, the archaeologist Sir Arthur Evans was proposed but declined to act in 1915; the position was taken instead by the Cambridge physician Sir Clifford Allbut.

There was a brief return to aristocratic connections in 1925 with the appointment of David Alexander Lindsay (Fig.3). A grandfather of former MI5 director, Eliza Manningham-Buller, Lindsey had succeeded to the earldom of Crawford and Balcarres in 1913 but was elected to the Royal Society as ‘a candidate of the privileged class’ - a category that no longer exists! A man of wide-ranging tastes, he became a Fellow of the Society of Antiquaries and a Trustee of the National Portrait Gallery, as well as holding a number of significant political appointments including Lord Privy Seal, although he declined the Viceroyalty of India. When he died in 1940, part of his book collection was bequeathed to the British Museum, and in particular a collection of Victorian erotica which was promptly placed in the Private Case. 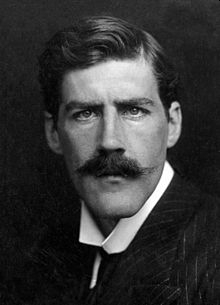 Since 1940, the Representative Trustees for the Royal Society have been scientists often with extensive London academic connections. For a period from 1945 and again in 1965, Edward Andrade, the Professor of Physics at UCL, held the post. Another UCL professor Sir Gavin de Beer, a zoologist, was appointed in 1955. Both men were also known for their work in the history of science and enjoyed reputations as lecturers with wide public appeal.

Another trend emerged in the 1970s where the Trustee had even closer geographical connections to the Museum: both Michael Stoker (between 1970 and 1978) and Walter Bodmer (Fig.4) (between 1983 and 2003) found themselves in the position. They would not have had to travel far to attend to their duties to the museum as both were in their time Directors of the Imperial Cancer Research Fund, then located on the south-west corner of Lincoln’s Inn Fields.

In the present century, the baton seems to have been handed over to London neuroscientists. Tim Bliss, well known for his work on memory, and Uta Frith (Fig.5), distinguished for her research into autism, have been the representative Trustees. All of us have London roots and have been involved in many of the Royal Society’s activities emphasising its collections and history. Along with the representative trustees from the Royal Academy, the Royal Society of Antiquaries and the Aldermen of the City of London, we all hope that we can contribute to the vitality and continuing wonder of the Museum as Sir John Soane had originally planned.

"Sir John Soane received his early architectural education under Mr Dance and Mr. D. Holland, and was afterwards sent, by the especial bounty of King George the Third, as a student of the Royal Academy, to pursue his professional studies at Rome. After his return he gradually obtained extensive employment, both as an architect and a surveyor, and finally succeeded in securing almost every important and honourable appointment which is connected with the exercise of his profession in this country. In later life, when in possession of an ample fortune and public honours, he became a most munificent patron of public institutions, and more particularly of those which are connected with the advancement of the fine arts; and in 1835 he bequeathed his house in Lincoln’s Inn Fields, and the magnificent collection of works of art which it contained, to the nation, and secured the accomplishment of this noble project by an Act of Parliament; he continued to pursue his usual course of public munificence until his death, which took place on the 20th of January last, in the 84th year of his age."