A new addition to the Picture Room

The Picture Room is one of the Museum's most spectacular rooms, with its opening picture planes dropping jaws at regular intervals throughout the day. This Summer, we've added a new work to this magnificent room. Owen Hopkins, Senior Curator of Education and Exhibitions, discusses. 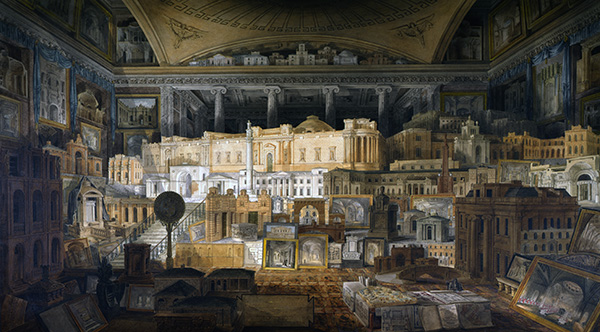 One of the highlights of the Picture Room's 118 paintings is Joseph Michael Gandy's (1771-1843) Public and Private Buildings Executed by Sir John Soane between 1780 and 1815, a vast watercolour depicting every building designed through Soane's career (and a portrait of Soane himself) in an imaginary, rather surreal stage-like space.

This summer, this work has been removed from the Picture Room for loaning to the Royal Academy of Arts, where it is being displayed in the exhibition The Great Spectacle: 250 Years of the Summer Exhibition (12 June – 19 August 2018). It will be back on display in the Picture Room in September. 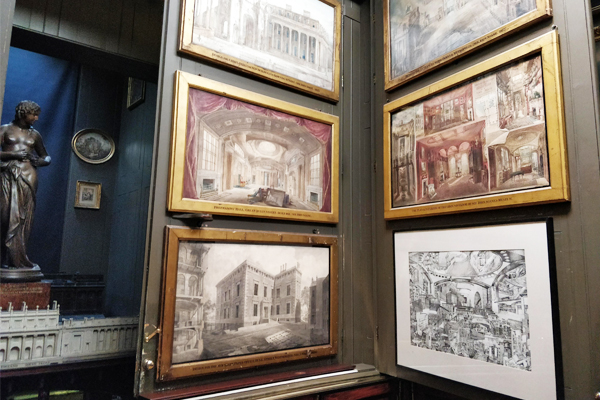 In its place, we are hanging a drawing by Peter Hull, depicting a composite view, closely inspired by the Gandy, of the works of the architect Richard MacCormac (1938–2014). Hull worked for MacCormac in the 1990s and is now an artist based in Barcelona. As you can see from the drawing, MacCormac was heavily inspired by Soane, borrowing and interpreting particular motifs as well as drawing from the ways Soane treated structure and light. 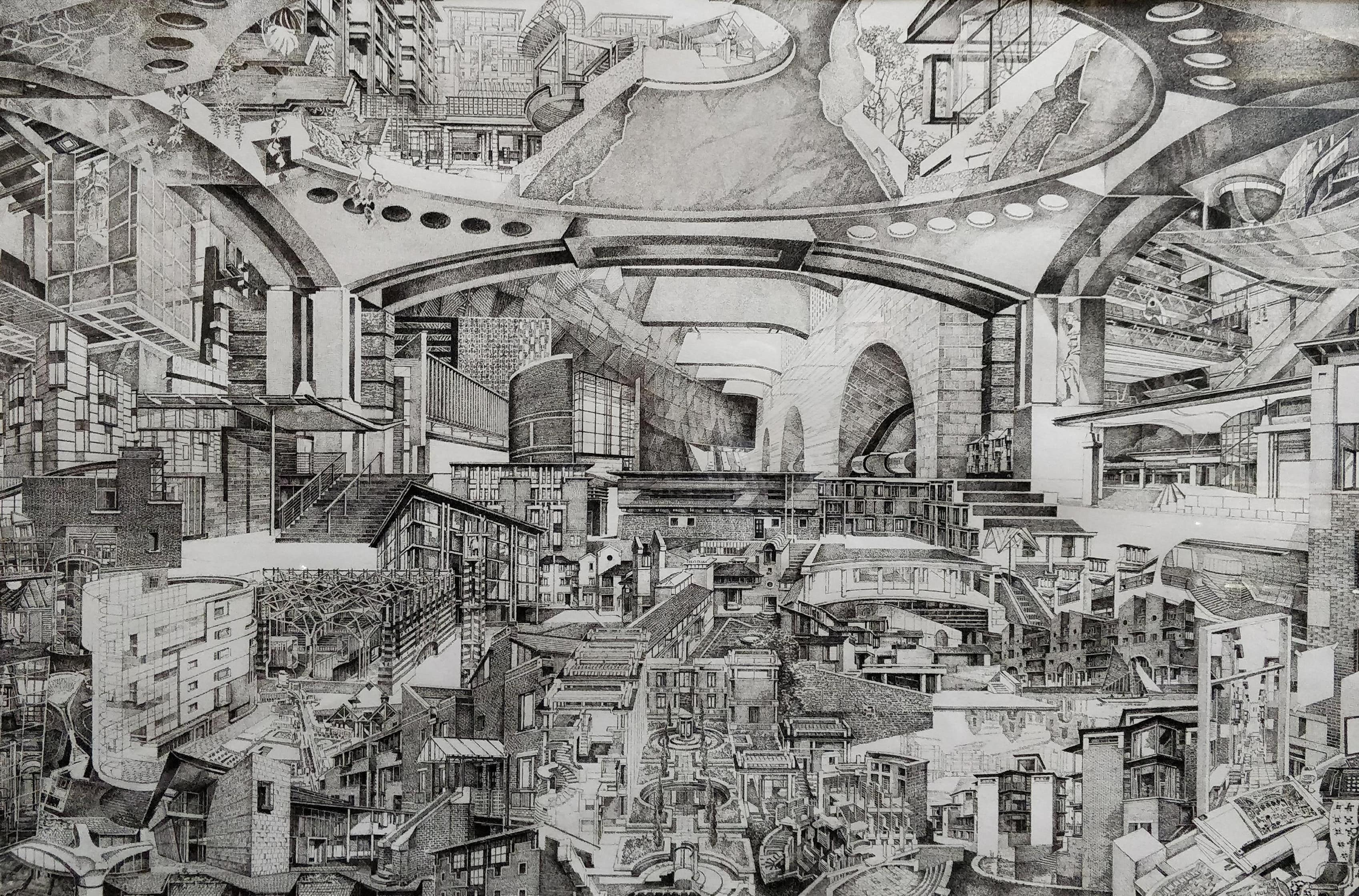 The shallow dome of the No. 13 Breakfast Room, which oversails Gandy’s drawing, is replaced in the MacCormac version by the rotunda at Garden Quadrangle at St John’s College, Oxford, which clearly follows Soane’s original. Other notable buildings depicted in the MacCormac version include the interior of Southwark Station (just to the right of centre underneath the shallow arch), the Ruskin Library at the University of Lancaster (just to the left of centre underneath the shallow arch), the extension to Broadcasting House (bottom left corner), the Cable and Wireless College, Coventry (far left under the arch) and many others.

Unlike Soane in Gandy’s version, MacCormac himself isn’t actually depicted. However, in the bottom right corner, we do see his desk, complete with fax machine, Marcel Breuer tubular chair, glass of brandy, and a reproduction of Gandy’s original, creating a nice symmetry to the MacCormac version hanging where its inspiration is usually found. 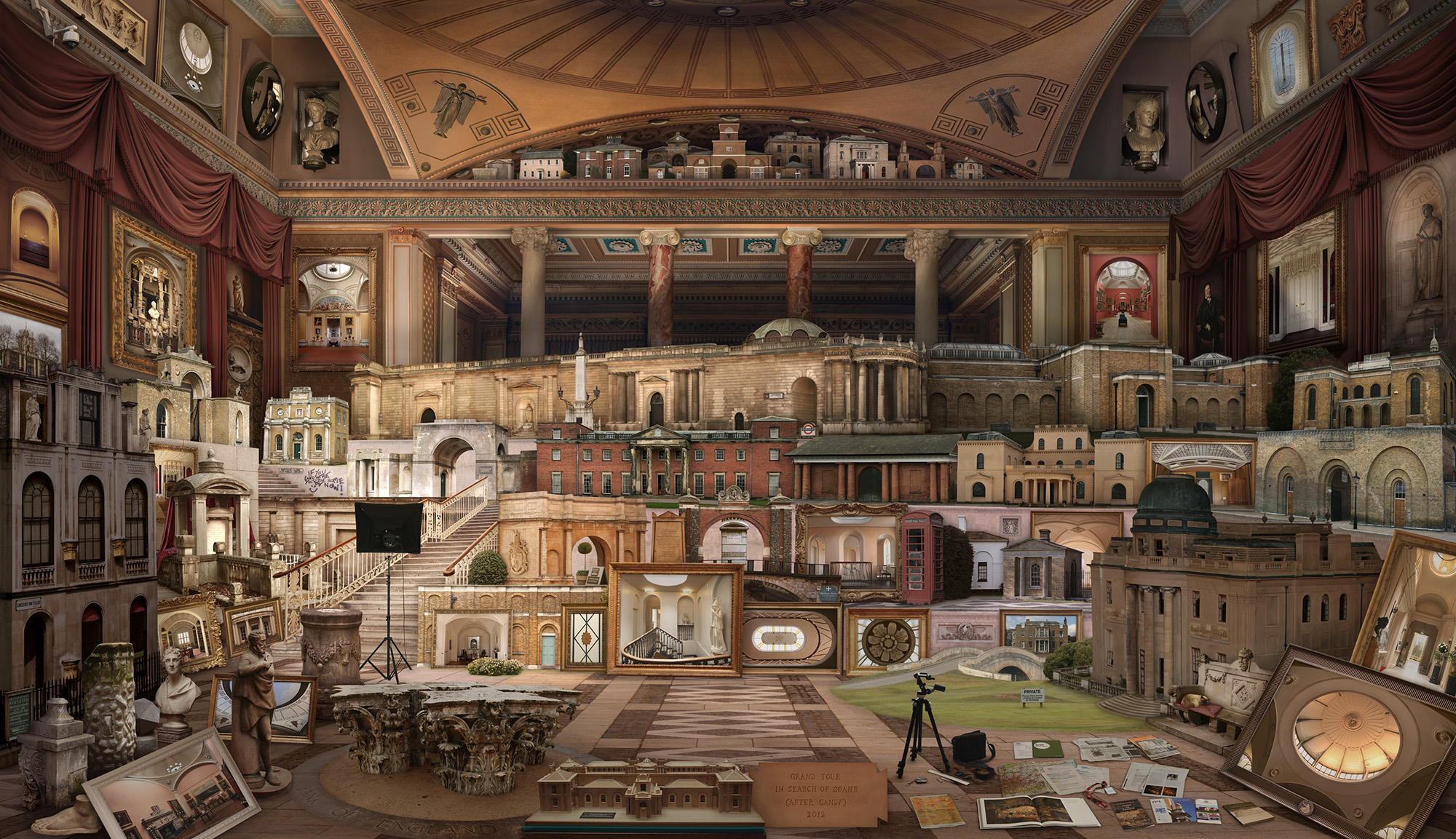 Emily Allchurch, Grand Tour: In Search of Soane (after Gandy), 2012

The work is not directly part of either of our exhibitions this summer: The Return of the Past: Postmodernism in British Architecture and Emily Allchurch: Visions of Architectural Fancy. However, it does create a nice bridge between the two. While MacCormac did not consider himself a postmodernist and rejected the label, his work explored ways of translating historical references into modern architecture that were comparable to some of the strategies employed by postmodern architects. And of course, Allchurch’s exhibition includes a literal re-creation of the Gandy using a complex technique of digital collage of her own original photography.

You can see this new addition for on a trip to the Museum. Click here for times that the Nymph's Recess planes of the Picture Planes will open.