‘Let there be light’: The drawings for Soane’s London Churches

As trainee cataloguer of architectural drawings I am cataloguing the drawings for Soane’s three London churches built as part of the Church Commissioners Act (1818). In this final article I look at the drawings themselves as a body of work.

Soane's London churches received, and continue to receive, a mixed reception. There is general praise for the interiors, but less for the exteriors. Indeed, some contemporary reviews were exceptionally hostile on some aspects of design (see my previous blog on St John's, Bethnal Green).

However one may interpret the finished products, by analysing the architectural drawings certain features emerge. The church designs, in general, are extremely well drawn by Soane’s Office. The drawings are usually properly ruled, with bar scales, with measurements and calculations often given, and they are well washed and colour-coded: shades of blue for metal or sky, Payne’s grey and sepia for window glass, yellows or browns for wood, pink for masonry and orange to differentiate other stones, and many drawings were produced on high-quality wove paper [Fig. 1]. 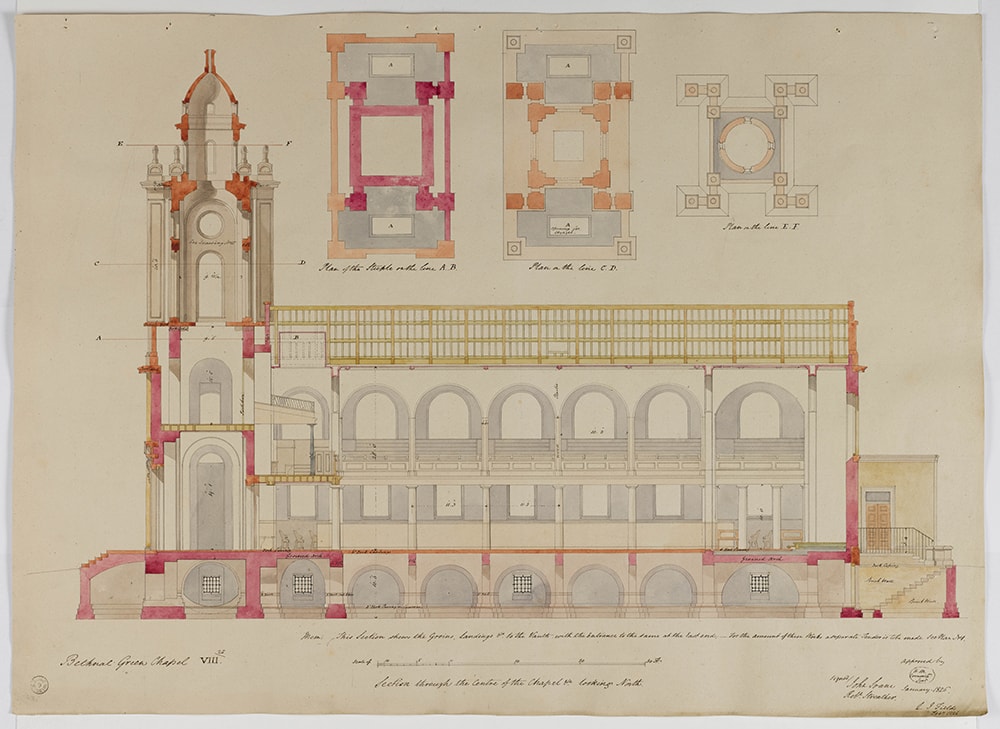 The corpus of around 280 drawings for all three churches (28 are in the V&A collection) contains the whole array of architectural drawings: site and ground plans, elevations, sections, details, and perspectives. Although generally drawn separately, at other times two or more types were incorporated into one drawing [Figs. 2-3]. 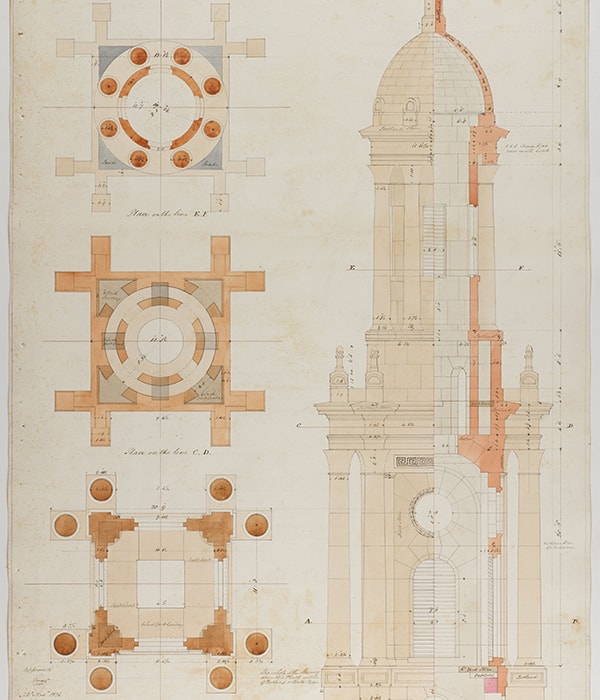 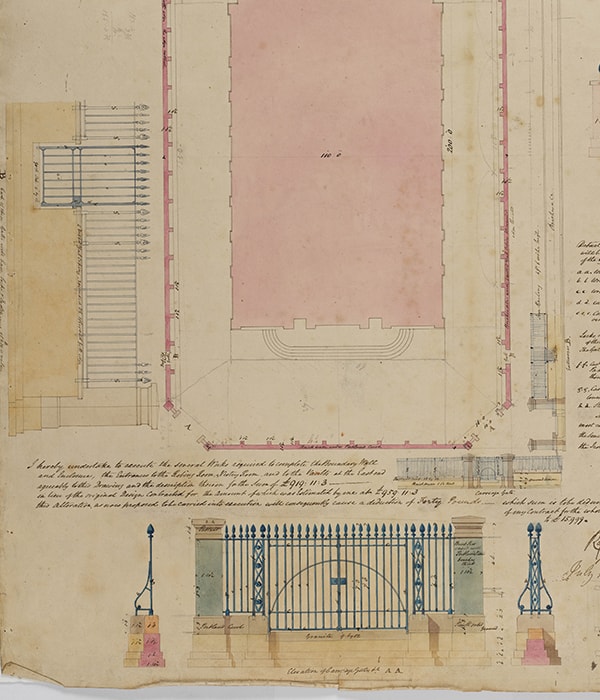 Fig. 3.  Attr. George Bailey and Stephen Burchell, St John’s, Bethnal Green, site plan including the curbing for the wall and elevations of parts of the iron railings and their placement around the church, 16 July 1827, SM 47/5/41 © Sir John Soane’s Museum / Ardon Bar-Hama

In the Georgian and Regency periods, architectural drawings were also a chance for the draughtsman to show a certain artistic dexterity. Many compositions in the corpus, even complex multi-images, show exceptional draughtsmanship. For example, the primarily artistic effect of Chiaroscuro (light and shadow) is enhanced in interior perspectives where Soane indicated the direction of light through the windows to illuminate the nave [Fig. 4]. Specific details such as iron posts show the effects of shading and highlighting upon them, where technically it was not needed [Fig. 5]. 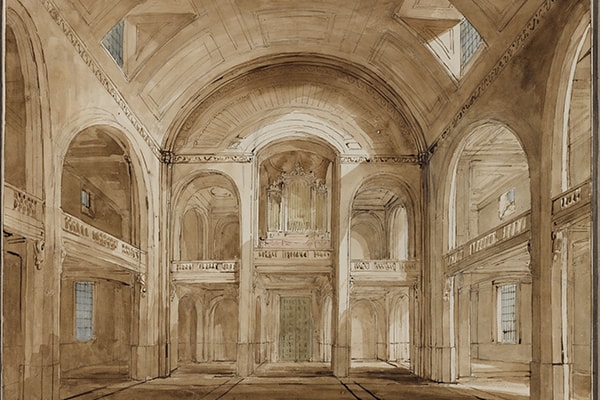 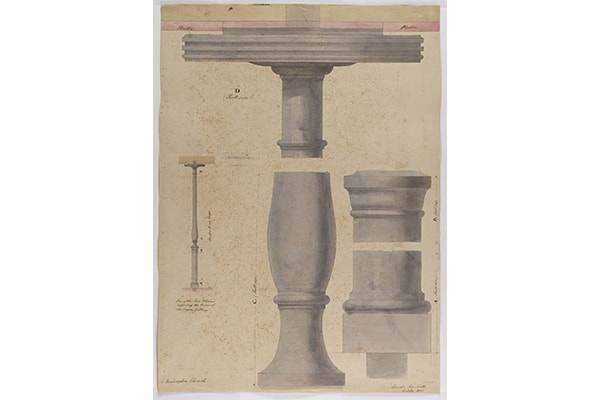 Exterior perspectives are given an enhanced sense of location by being set within land or cityscapes [Fig. 6]. The church is not abstracted with a plain background, and the use of cloud and sunlight again give an exterior chiaroscuro effect, with the west front bathed in sunlight, and the southern side in shade. Soane was most probably influenced his Royal Academy tutors: Sir William Chambers (1723-96) and Thomas Sandby (1721-98), who also produced picturesque perspectives, and were important figures in Soane’s early architectural education. 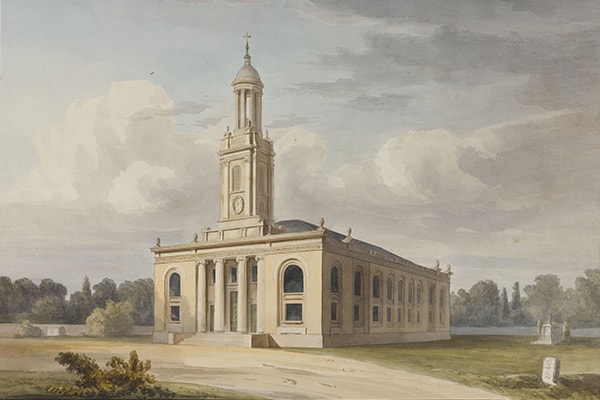 Indeed, Soane would impart these lessons to his students. The superior draughtsmanship of his pupils is testimony to Soane’s long and rigorous training methods, and was enhanced by using his vast collection at his house in Lincoln’s Inn Fields to inform their designs.

The need to produce technical drawings, or ‘Geometrical delineations’ as Soane sometimes referred to them, still formed the mainstay of architectural practice. Nonetheless, many drawings were enhanced using artistic effects, whether required or not, to create an aesthetic impact upon the viewer whilst maintaining their architectural efficacy. As a result, formal architectural design, as illustrated by many of Soane’s church drawings, was being consciously elevated to the level of the picturesque.