Walpole's desk in the Monk's Parlour

Surrounded by grinning gargoyles and medieval fragments, the wooden desk beneath the stained glass window of the Monk’s Parlour seems inconspicuous. 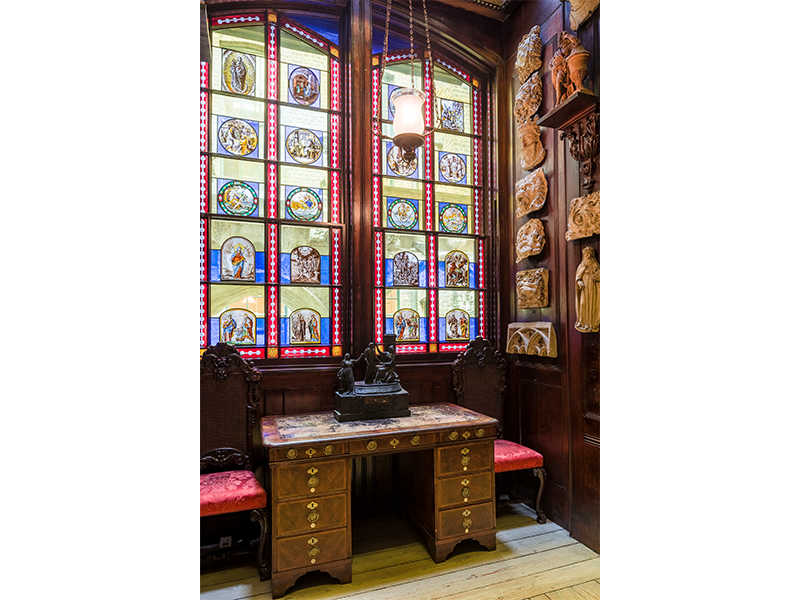 Walpole, first earl of Orford (1676–1745) was born at the Old Manor House in Houghton in Norfolk and although a younger son ended up inheriting his father’s Estate. Despite financial difficulties in his early years, he amassed a great fortune which enabled him to rebuild Houghton Hall in the 1720s as a celebration and reflection of his power and prestige as the King’s first minister and it eclipsed the seats of most of his political rivals. By the late 1730s he had built up an outstanding collection of more than 400 paintings which were hung in the grand State Rooms on the first floor. After his death, his impoverished heirs sold the collection, 80 of which were bought by Catherine the Great and hang today in the State Hermitage Museum in St. Petersburg, Russia. 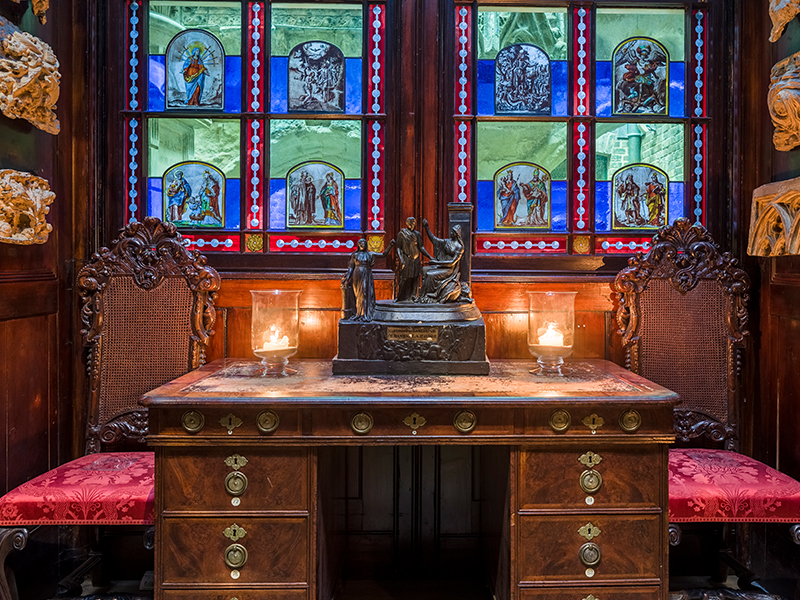 Although Walpole died in 1745, 8 years before John Soane was born, there is a connection. Orford House, which Walpole occupied from 1715 as paymaster-general of Chelsea Hospital, was his favourite London residence. Between 1715 and 1716 he employed Sir John Vanbrugh to enlarge the seventeenth-century house. He also extended the gardens at the expense of the hospital, adding a river embankment, orangery, and summer-house. A century later, John Soane, as Surveyor to the Royal Hospital at Chelsea, demolished what a was by then known as “Walpole House”, in 1811, in order to build a new Infirmary.

Some of Walpole’s furniture was apparently still in situ and Soane acquired three Kent tables and, perhaps most significantly for this anniversary, an early 18th century walnut desk said to have belonged to Walpole, perhaps the ‘Walnut Tree Desk’ listed among the household furniture at Orford House in the 1745 inventory.

It is extraordinary that in the window of Soane’s mock-Gothic Monk’s Parlour is the desk of England’s first Prime Minister, one of the greatest politicians in English history who, as H.T. Dickinson wrote, ‘played a significant role in sustaining the Whig party, safeguarding the Hanoverian succession, and defending the principles of the Glorious Revolution’ of 1688.

Want to hear more from the Soane?

Stay in touch with Sir John Soane's Museum by signing up to our Newsletter mailing list. Find out about upcoming exhibitions, events, digital resources and shop offers.