Hogarth: Place and Progress unites all of Hogarth’s series at Sir John Soane’s Museum from 9 October. With some 56 paintings and engravings on display, this blog highlights three of key works from this major exhibition. 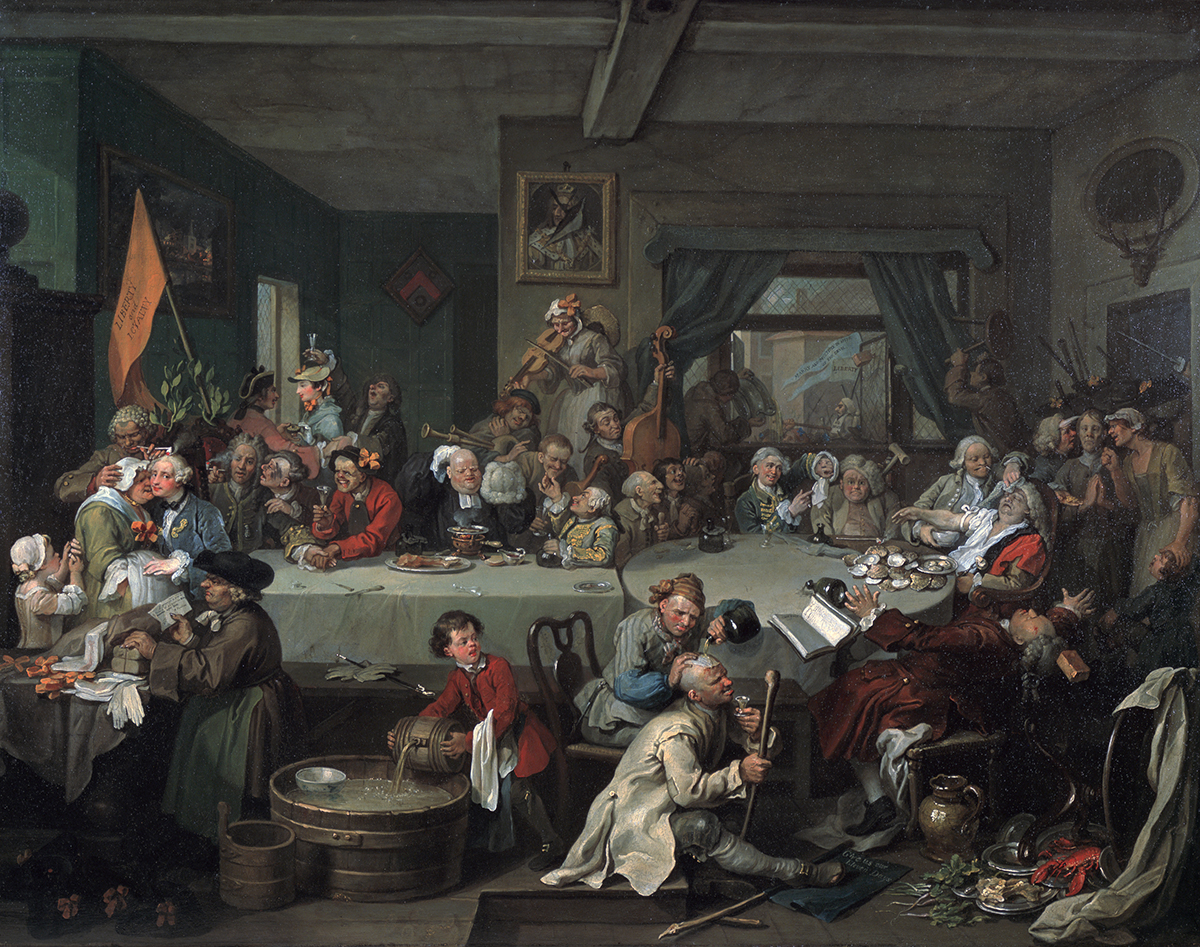 The Humours of an Election, 1: An Election Entertainment

A classic example of Hogarthian satire, The Humours of an Election satirises the corruption at all levels and on both sides of a fictional election taking place in Hogarth’s day. In this scene, the first in the series, a campaign dinner has turned into a riot, and nearly every figure in this riotous scene is heavily drunk. At left, the Whig party’s candidate seduces an old woman for her favour; the second candidate just behind him is unwillingly embraced by several drunkards. At the other end of the table, the town mayor is being leeched after gorging on oysters. Violence is also prevalent: at right, officials attempt to barricade the door against a mob of Tory voters outside, and the party secretary, counting the votes, is struck on the head by a brick lobbed through the window. The king’s portrait hangs slashed and forgotten above the whole affair. 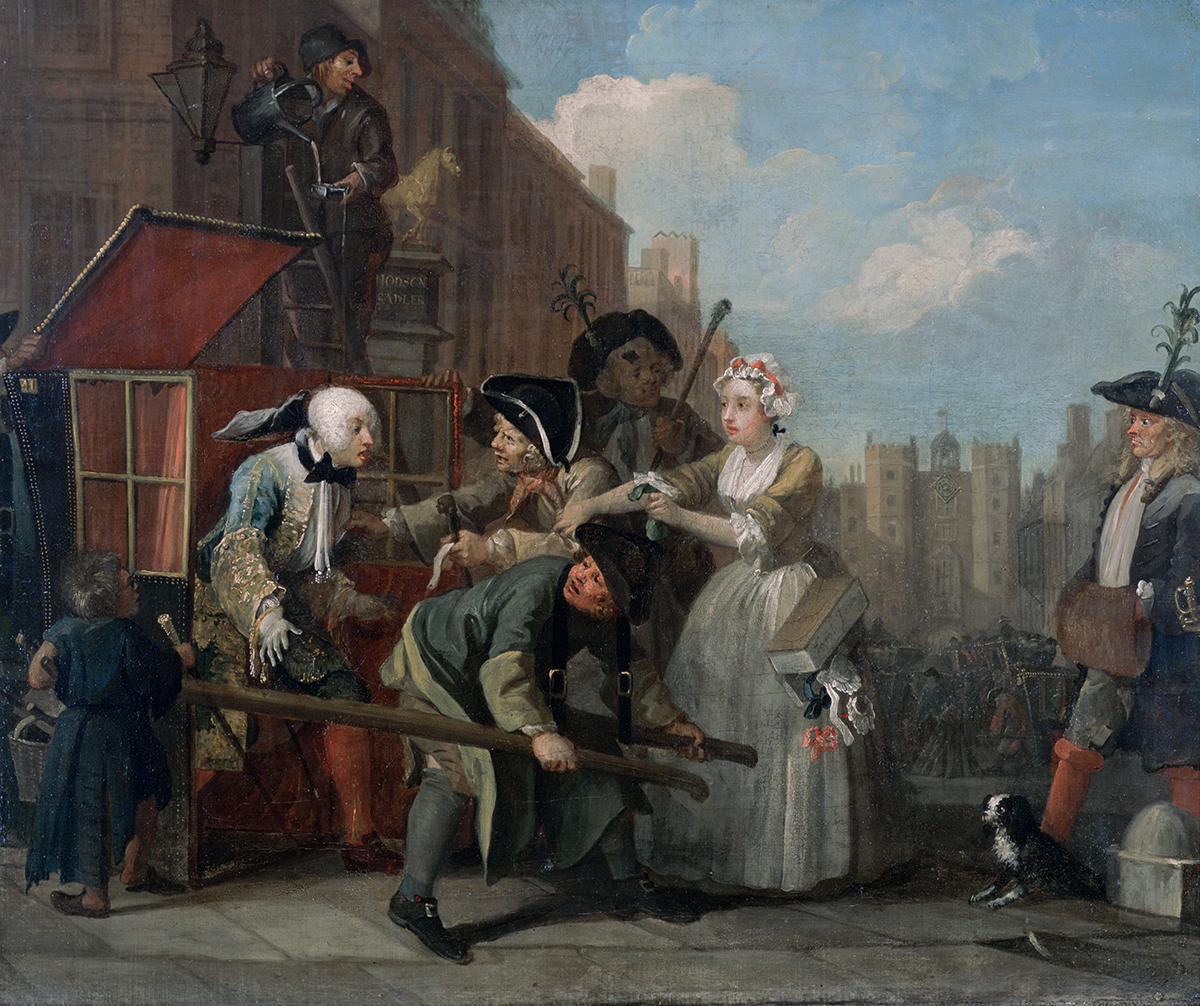 A Rake’s Progress, 4: The Arrest

A Rake’s Progress tells the story of Tom Rakewell, who inherits fortune but squanders it on vices, leading him to ruin and madness. In this pivotal scene, the Rake is travelling to a meeting at St James’ Palace in an attempt to climb the social ladder, but his carelessness with his money leads to his arrest for debt before he can get there. His former fiancée, Sarah Young, selflessly resuces him, paying the fine on his behalf. Sadly, the Rake does not redeem himself but rather fails to see the moral of this act, and falls into futher financial ruin.

The scene illustrates the importance of place in Hogarth’s works, which Hogarth: Place and Progress seeks to highlight. Situated at the heart of the aristocratic West End, St James’ Palace represents Tom Rakewell’s goal – the attainment of a higher social status – but one that his immoral actions and wasteful spending will never allow him to achieve. Representing the Rake’s misfortune, a distracted lamplighter accidentally spills oil over his wig. 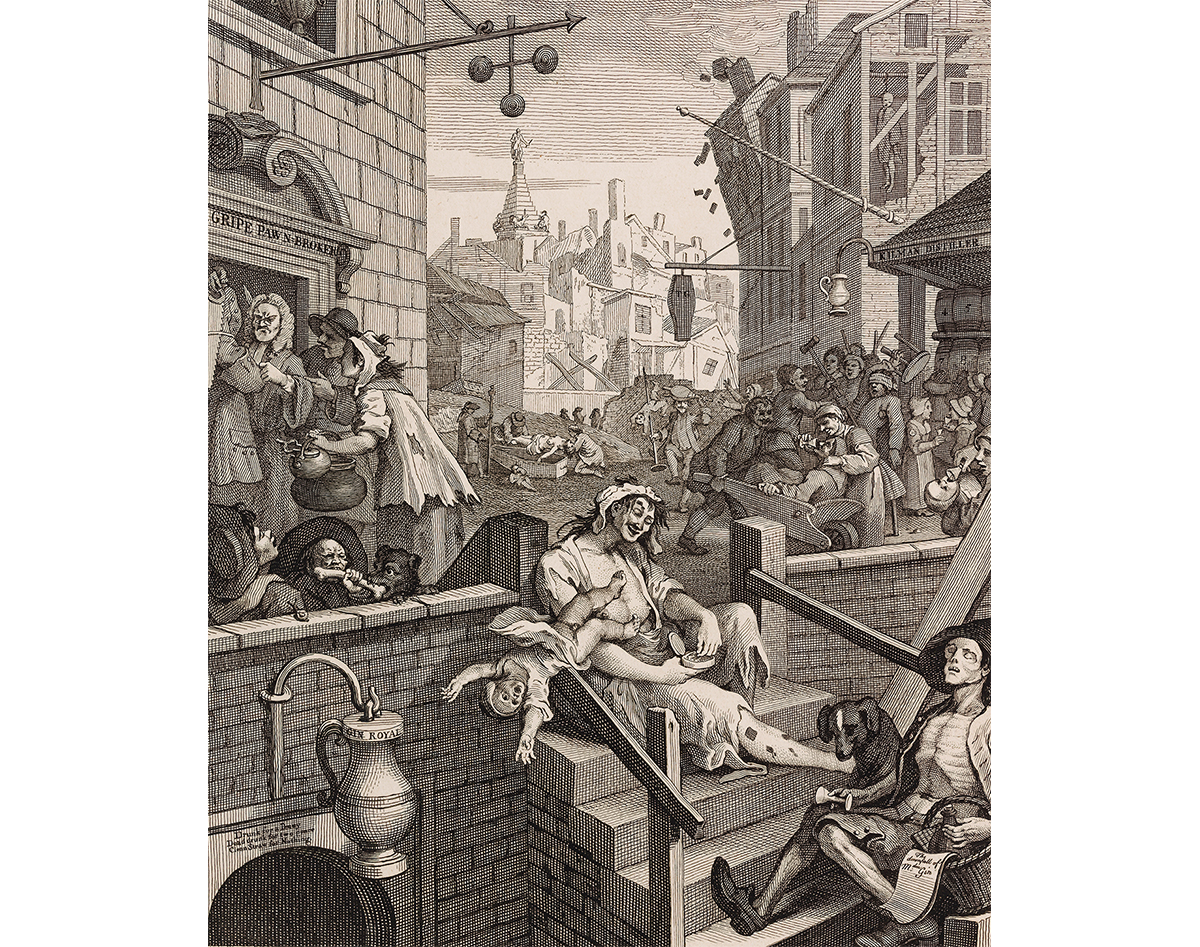 The notorious slums of St Giles, on the site of today’s Covent Garden and Oxford Street, form the backdrop of this cautionary scene warning against the vices of gin. At the centre of this scene, a drunken mother drops her starving child over a balcony. Further harrowing scenes fill the background: a woman laid into a coffin, a man dancing with an impaled child, and a suicide by hanging in a tumbledown building. In fact, the only building not crumbling is the pawnbroker, as the townsfolk desperately sell their last posessions. This print served as a companion piece to Hogarth’s Beer Street, where, by contrast, the Pawnbroker is driven out of business in a more prosperous scene of lightly-sozzled merriment.

Book your tickets to the exhibition

Hogarth: Place and Progress opens on 9 October. Entry is by free timed ticket only: book your ticket online.

If you'd like to read more about Hogarth, check out our Hogarth 101, which introduces the artist and his life.