As we work at home, perhaps in a home-office but alternatively perched at one end of the dining table or even sitting on the sofa, it’s intriguing to think about the fact that John Soane himself was a home-worker.

As a young architect in the 1780s he lived in rented rooms and must have worked there, even after he took his first pupil in 1784 (the year of his marriage) and his second in 1786. From 1788, when he was appointed as its Architect, he had an office at the Bank of England. In 1791 he rented a new office in Great Scotland Yard, presumably using some of the money inherited from his wife’s wealthy uncle in 1790.

However, as soon as he began to build his own house, No. 12 Lincoln’s Inn Fields, in 1792-94, he immediately began planning to combine his home with his expanding architectural practice. To that end, he replaced existing stables with a hayloft above, at the back of the site, with a purpose-designed, double-height office with a separate entrance onto the mews street, Whetstone Park, behind the house. We have two views of that office, made in 1807 when it was being emptied as part of the move into No. 13, the rear part of which Soane had just rebuilt. 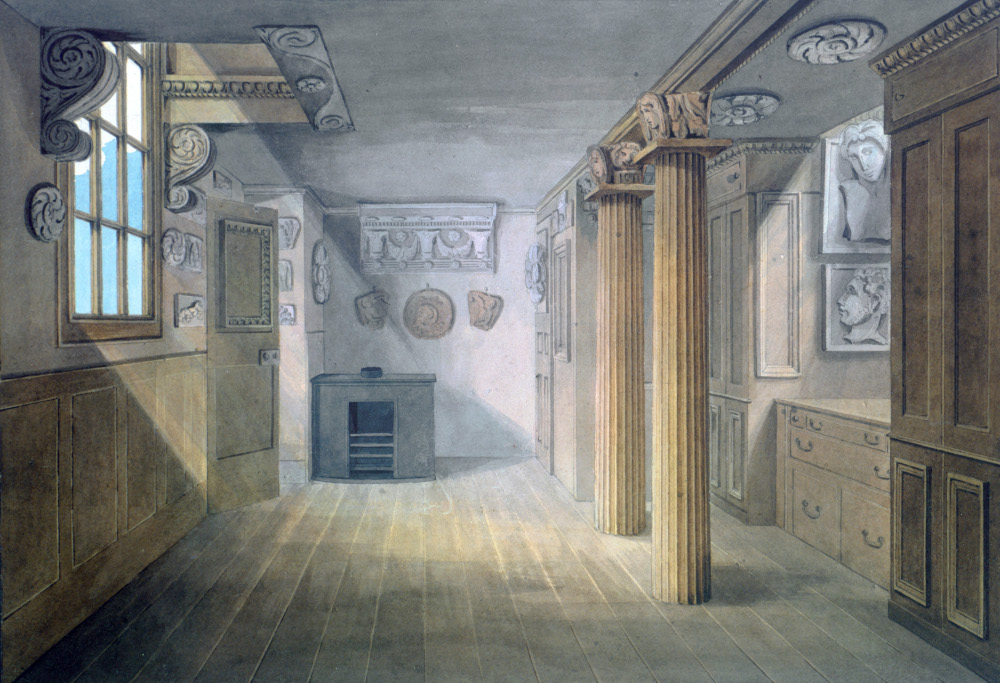 Soane himself probably never worked there, however, preferring to use the large desk in his Breakfast Room and Library, which appears in Joseph Gandy’s view of 1798. This desk is still in the Museum today, serving as a pier table in the Library-Dining Room. 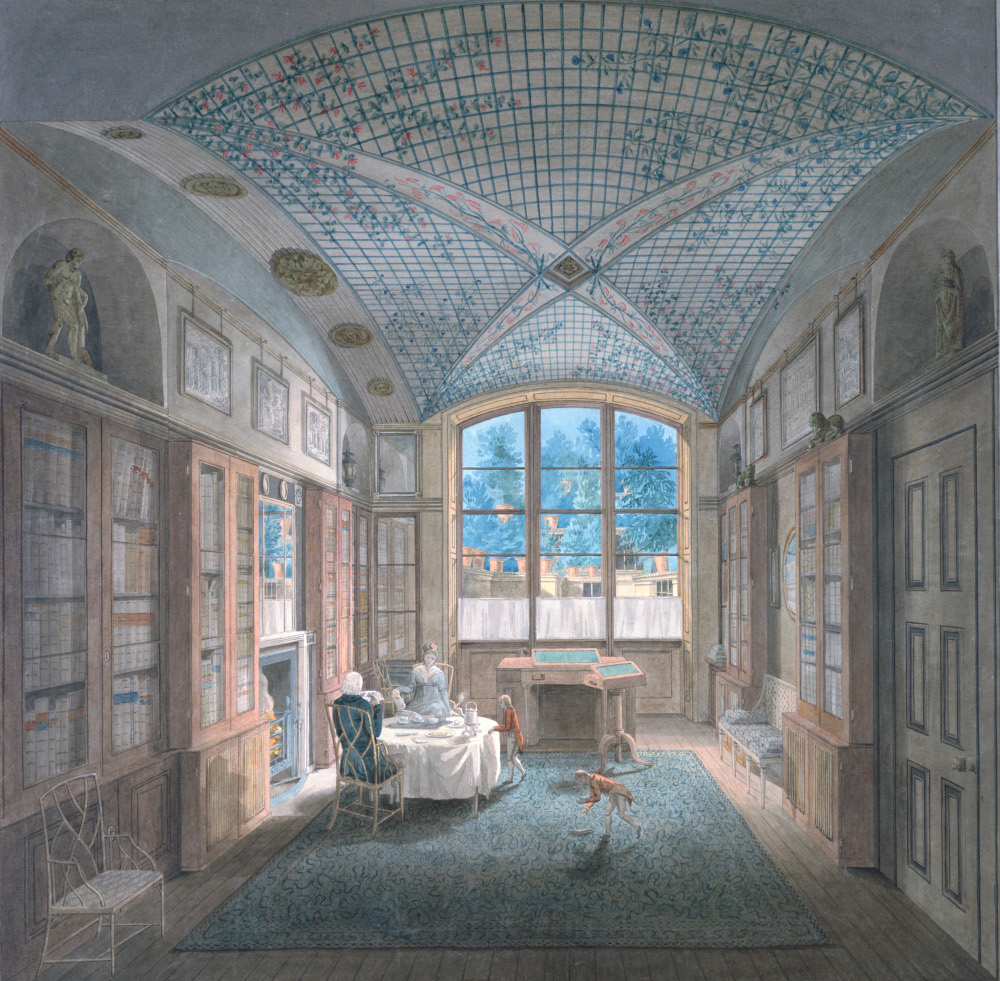 J.M. Gandy, view of the Breakfast Room at 12 Lincoln’s Inn Fields, 1798, watercolour on paper, SM 14/6/1. Through the window you can see the rooflights of the Office at the back of the house, behind the serried ranks of potted plants – gardening in small spaces is nothing new!

When Soane redeveloped the rear premises of 13 Lincoln’s Inn Fields to extend his home, in 1808-09, he constructed new architectural offices with a new entrance from Whetstone Park. The upper office survives to this day and there his pupils worked on all the business of a busy practice – copying drawings, writing out bills, working up designs from Soane’s sketches, making site visits and much else. All this is meticulously recorded in the surviving Office Day Books, which exist in an almost unbroken run for about 45 years charting everything from individual times of arrival to framing drawings for Royal Academy. exhibitions, deliveries of drawing paper and days off for Jewish and other holidays. The pupils were absolutely forbidden to go to the kitchens and fraternise with the domestic servants.  The upper office was designed very cleverly with apertures below the desks, infilled with metal grilles, that served a dual purpose - they enabled heating pipes to snake through and around, enabling the office to continue to work in winter, but they also enabled the chief clerk, probably seated in the lower office, to hear everything that was said above. 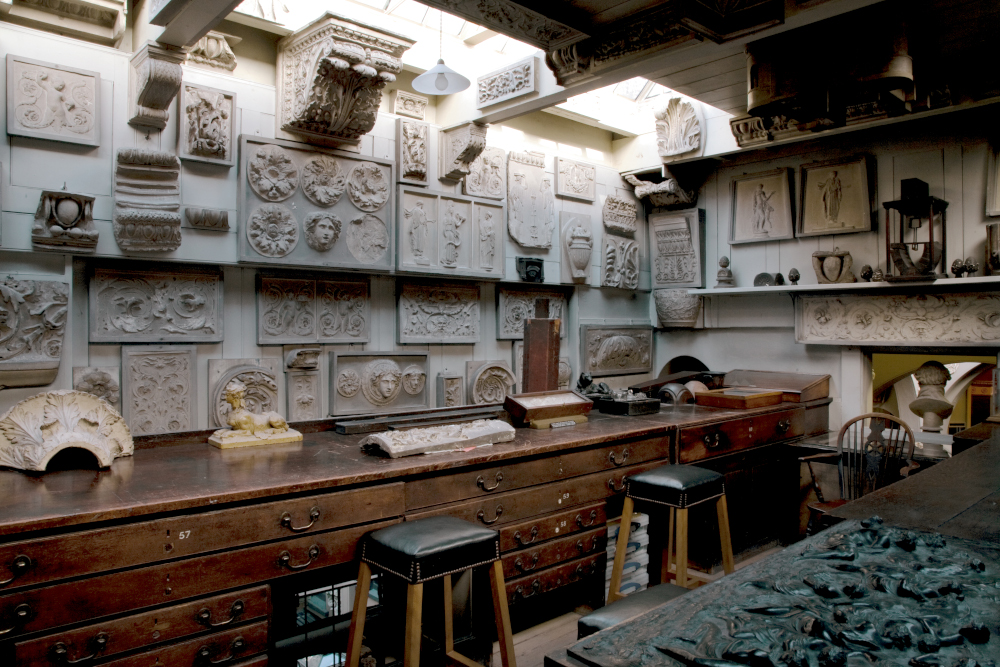 The surviving upper office, as modified by Soane in the 1820s, still survives. It is tiny and cannot be open to the public but we plan to restore it in 2022-23 and hope to provide some regular access for small groups once that work is completed. Photo by Derry Moore

John Soane did not ever work in this busy office. He had his own ‘Little Study’, with a desk that he designed himself neatly fitted into the window bay and a pull-out table just the right size for a drawing board. The light that fell onto his work surface was modulated by the use of dwarf Venetian blinds whose angle could be changed by adjusting a turn-screw set into the top edge. It was also softened by the pale-yellow glass in the skylight above, filtering the bright sunshine.  He looked out onto the Monument Court with its walls inset with a variety of architectural fragments salvaged from older buildings.

Hung on the walls around him, as we can see from Gandy’s view of the Office in 1822, was a collection of Roman marble fragments. These had a special personal significance for him, having belonged to his early teacher, the architect Henry Holland, for whom they had been collected in the 1790s. Soane arranged them himself, using some of the column sections to create the idiosyncratic fireplace surround, flanked by cinerary urns in niches echoing in miniature those of the ancient Roman columbaria where such urns stored the ashes of the dead to form large cemeteries. Just as we sit surrounded by our favourite items and mementoes of our travels, so Gandy’s view shows Soane surrounded by his treasures including a fine small group of bronzes on the mantelpiece. On the desk is his inkstand and a quill pen and books are tucked into the specially constructed apertures either side of the desk. A portfolio case with a black cover, full of drawings and paperwork, sits on his table. Two vertical card racks either side of the doorway are brimming with visiting cards, notes and invitations – as full as our mantelpieces in happier times!

In Gandy’s view we see from Soane’s office into the next room, a small Dressing Room, whose title gives us a hint about how Soane’s day might have worked. He could have been called either to meet an important visitor arriving at the front door or to go through the door we see in the distance in Gandy’s watercolour. That leads to a passageway that goes directly to the back door, the Office door. Off the narrow passage is both a closet where he might have hung jackets or stored his wig and a flushing water-closet, a luxury that was matched by a bath and WCs he provided for the use of his servants downstairs in the basement. While Soane washed his hands at the basin in his Dressing Room or adjusted his cravat in the large mirror hanging on the door he could have glanced round at a group of framed works that he must have chosen specifically for this private space. Portraits of two close women friends, Maria Denman and Nora Brickenden are the equivalent of our family photographs. They hang near a design for a Classical Dog Kennel in Soane’s own hand – a reminder of happy days exploring the Roman campagna with his early Patron, the Earl-Bishop of Derry on his Grand Tour between 1778 and 1780 and a plan of Paris, a city that Soane visited three times, in 1778, 1814 and, finally, in 1819 and whose architecture inspired many of his own (alas unrealised) grand projects for London.

Just as we work at home today in surroundings that we have to a greater or lesser degree personally ‘curated’ to reflect the things that matter to us, so Soane’s ‘Little Study’ and Dressing Room provided him with an inspirational work-space where he could tackle his projects surrounded with reminders of past pleasures and the world beyond. 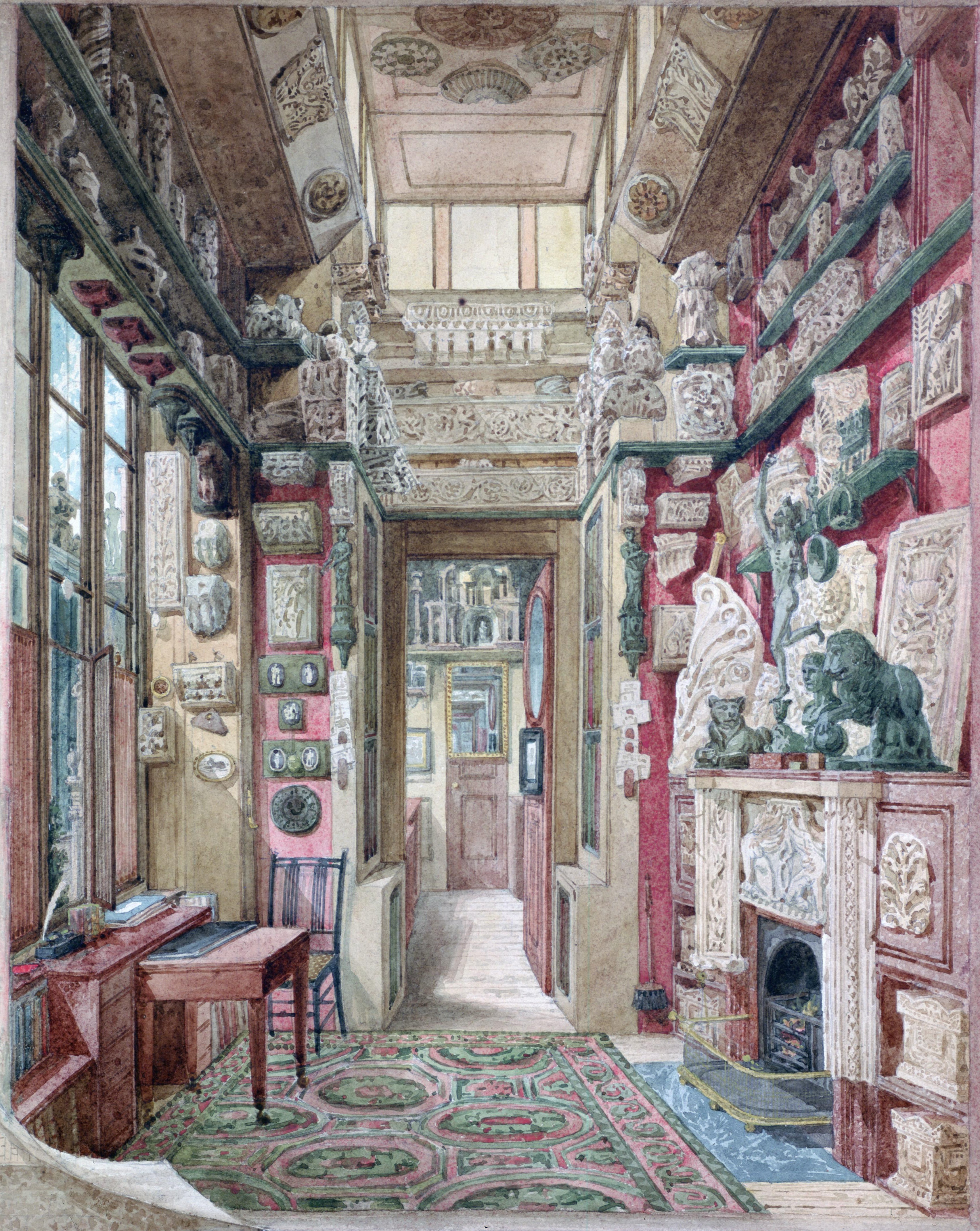