The famous red telephone box is one of Britain’s most ubiquitous designs. Though followed by a series of later designs, the red ‘K2’ can still be found across the UK and remains a must-have photo opportunity for tourists. Less well known, however, is the source of this famous design, which the K2’s designer, Sir Giles Gilbert Scott, ‘quoted’ from the architectural designs of Sir John Soane.

Sir Giles Gilbert Scott was one of the most prominent British architects of the early 20th century, and many of his designs have become iconic landmarks, Battersea Power Station, Liverpool Cathedral, and Cambridge University Library, to name a few. Scott’s design was selected as the winning design in the 1924 competition for the design of the K2 (‘K2’ being short for ‘Kiosk’) telephone box, which largely replaced the earlier ‘K1’ design.

Scott was familiar with Soane, becoming a Trustee of Sir John Soane’s Museum in 1925, the year the design was selected, and the shallow-domed roof of Scott’s telephone box is unmistakably Soanean. Though Scott never cited a particular source for his design, there are certainly several candidates, images of many of which can be found amongst the collections of the Museum. 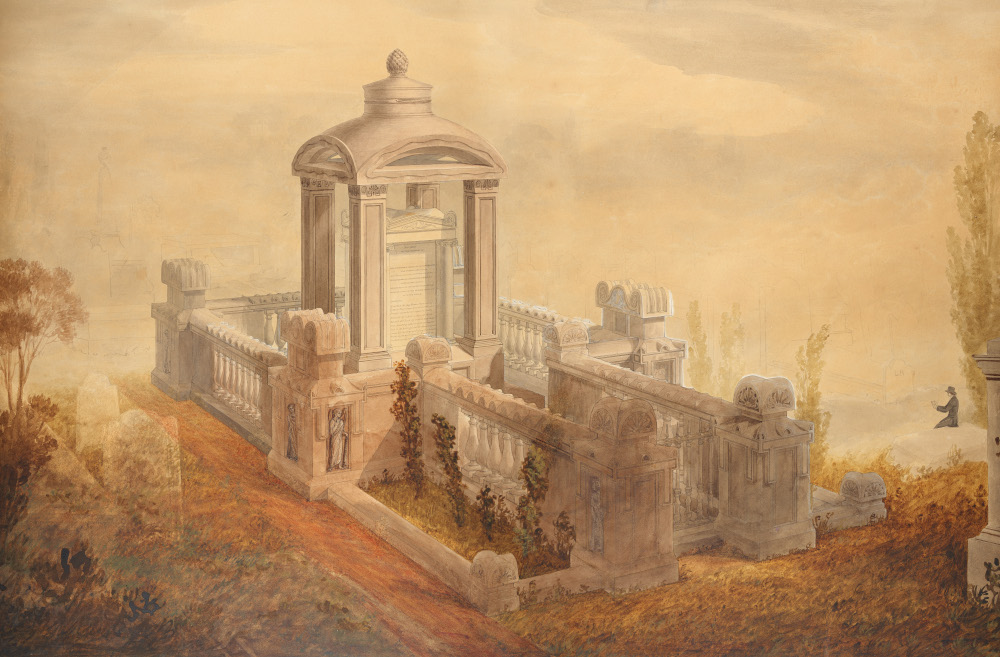 Joseph Michael Gandy (1771 - 1843), View of a monumental tomb erected in the burial ground of St Giles in the Fields at St Pancras (Mrs Soane’s tomb), Watercolour on paper

The most commonly attributed source for the K2 roof is the Soane family tomb, which you can still find today in the churchyard of St Pancras Old Church, London. Soane designed this for the tomb of his beloved wife Eliza Soane in 1815, and was later buried there himself. Of great emotional significance to Soane, for whom the loss of his wife was a bitter blow, the tomb pops up in several places throughout the Museum – a drawing is featured prominently in the No. 13 Breakfast Room, and a model can be found in the Library Dining Room, in which the Trustees meetings were held during Scott’s day. Also in the Library-Dining Room are two fireplaces, which are decorated with a fluted pattern. As well as being a great example of Soane’s reduction of classical forms to their barest elements – in this case the incised lines decorating the fireplaces become fluted columns and architrave of a Classical temple, and the corners double as columnar capitals - this patterning is remarkably similar to the decoration on the edge of Scott’s telephone box. With that said, however, the shallow dome was one of Soane’s favourite motifs, and there are plenty of other designs from which Scott could have sourced his design. Other examples of Soane’s shallow domes include the gateposts of Pitzhanger Manor, which Sir John Soane rebuilt as a residence for his family and owned until he sold the property in 1810, and the top of the mausoleum of Dulwich Picture Gallery (direct comparison is easy here because there’s a K2 telephone box right outside the entrance). The shallow dome can also be found in Soane’s drawings for the tomb for Samuel Bosanquet in St Mary's Churchyard, Leyton, 1806; the tomb for Philippe de Loutherbourg in the churchyard of St Nicholas, Chiswick, 1812; or the Simeon Monument in Reading of 1804.