Today, 23 April, is #Shakespeare Day, the date on which Shakespeare died in 1616, and is generally thought to have been born in 1564. Sir John Soane, an avid Shakespeare enthusiast, would surely have noted the date. A number of artworks with Shakespearean subjects grace the walls of the Museum, and a ‘shrine’ to the bard can be found in the recently restored Shakespeare recess on the staircase of No. 13. 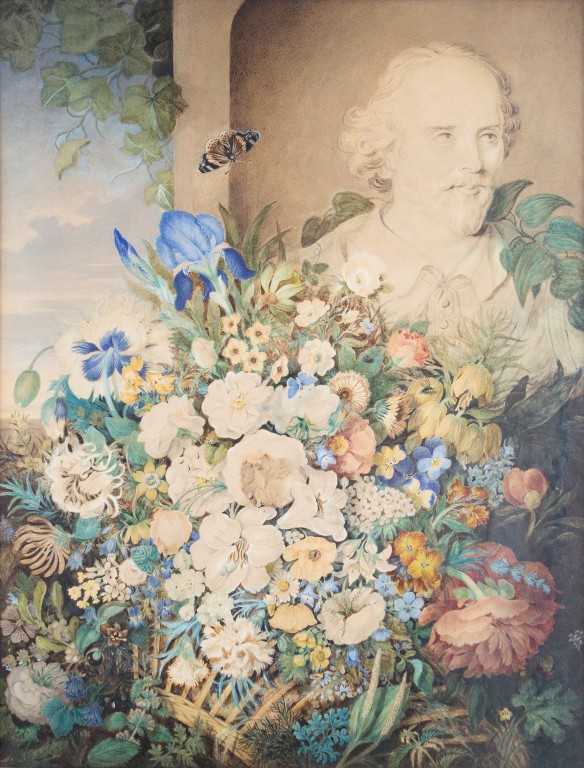 This work, painted by the artist Clara Maria Pope is one that most commonly catches the eye of visitors during tours of our Private Apartments. An 1837 inventory of the Soane describes it as 'The Bust of Shakespeare encircled by all the Flowers mentioned in his Works'. The bust seems to be that of Shakespeare by Scheemakers, of which Soane owned a cast (the original is on the poet's monument in Westminster Abbey). Read the full description of this work on our Collections Online database >

If you’d like to try and have a go at listing them yourself, we’ve listed the answers – and the sources – below. These answers are taken directly from a note supplied by the artist herself, which was provided with the painting when it was acquired by Soane.

Brier or Eglantine - [A] Midsummer Night’s Dream, Cymbeline, As You Like It

Honeysuckles or Woodbine - Much Ado About Nothing

Parsley - [The] Taming of the Shrew

Pimpernel - [The] Taming of the Shrew

Thistle - Much Ado About Nothing

"Onions, Leeks and Garlic are under the roses in the basket. The Laurel over the shoulders of the bust is called the Alexandrian Laurel, and is what the Ancients used to crown their heroes. Clara Maria Pope,1835".