Sir John Soane’s Museum was honoured by several Royal visits during the course of the 20th century, and today, as we are about to celebrate the Platinum Jubilee of our present Queen, HM Elizabeth II, seems a good moment to dig into our archives and explore royal reactions to the Soane.

The first visit, which took place on 8 March 1904 when Walter Spiers, later to become Curator of the Museum, was standing in for the then Curator, George Birch, who was holidaying abroad, was a surprise one. As Walter Spiers recounted in his diary: ‘Shortly before 4 I was told that a lady wished to see me. I went down to the Library where were two ladies who expressed a desire to see some of R. Adam’s drawings of chimney pieces. Only one lady had signed her name, the Hon. Mrs Mitford, but the other lady was H.R.H. the Princess of Wales [Princess Mary] – as she evidently wished to preserve her incognito – I of course respected it – after looking through 2 of the Adam books I conducted them all over the Museum. They were interested in the Soane Portraits, his Design for a Royal Palace, the Canalettis, the illuminated MSS, the painting by Jones of the Opening of London Bridge and the 2 drawings of the Coronation of William IV, the Naseby enamel and the key with Fred. P of Wales’s initials [at this period a selection of manuscripts and small objects such as these were on display in glass cases in the South Drawing Room, which had not been the case in Soane’s day and are not therefore part of the current arrangement]. They left at 5 o’clock, H.R.H. graciously thanking me and shaking hands.’

Four years later, on 19 March 1908, by which time Walter Spiers had become Curator of the Museum, H.R.H. the Princess of Wales visited again, this time accompanied by her daughter, Princess Mary and by Lady Bertha Dawkins. Once again ‘she looked through several volumes of the Adam drawings and then went over the Museum with my guidance’. 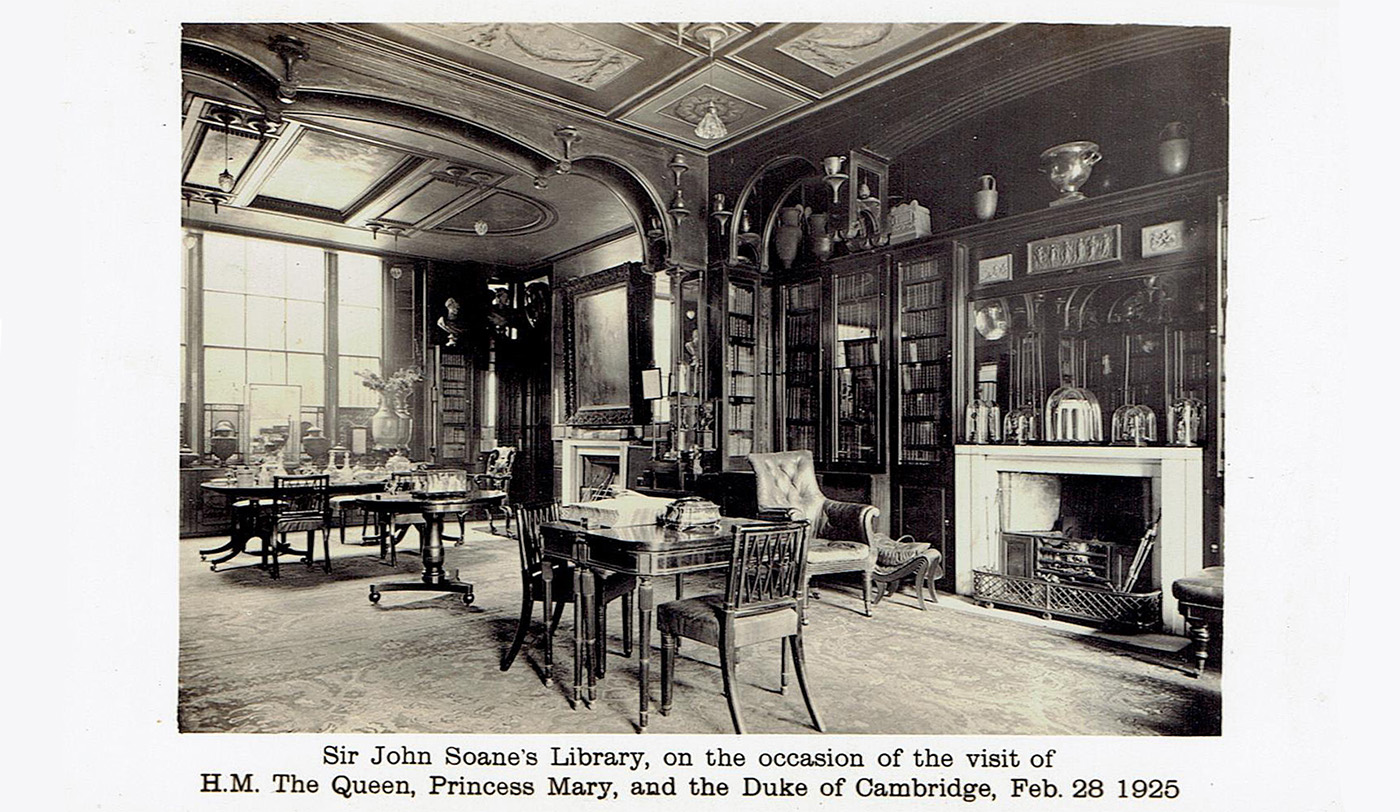 The Royal visit of 28 February 1925, when Arthur Bolton was Curator, was an altogether more elaborate affair. Her Majesty Queen Mary (she had become queen shortly after her previous visit, on 6 May 1910,) was again accompanied by her daughter, Princess Mary, and also by the Duke of Cambridge. Bolton recorded in his diary: ‘The Queen, Princess Mary & Duke of Cambridge 3-4.30 pm. Went over house (Kitchen & top floor included). The ground floor front was arranged as in Sir J[ohn] S[oane’s] time with Dining Table from Curator’s Room [this was Soane’s original dining table, now once again on display in the Library-Dining Room] laid out with china & glass & silver. Druggets taken out & old carpets on view. Show cases taken out. Fires lit & Mimosa in vases. On small centre table book to sign & silver ink stand. On 1st floor 9 volumes of Adam [drawings] showing Harewood laid out.’ This was a deliberate choice on Bolton’s part, as Princess Mary had in 1922 married Viscount Lascelles, heir to the 5th Earl of Harewood.

Bolton continues: ‘On 2nd floor in Curator’s Room carpet design for the Adam Room at Wembley’ – a room designed by Bolton for the Wembley exhibition of 1924-5 – ‘& quarter-scale coloured sketch. On 3rd floor front H.M. interested in old furniture. The visit was a great success & most friendly. Mrs Bolton & Jack [his wife and son] present – 7 in all.’

Bolton not only recorded the visit in his diary, but also had two photographs taken of the Library-Dining Room as set up for the visit, which were subsequently turned into postcards to be sold at the Museum (Figs 1 & 2). Queen Mary’s final visit to the Museum came after it had reopened after the end of Word War II, on 17 June 1948. The Curator, Sir John Summerson, merely recorded in his diary: ‘Queen Mary visited the Museum, arriving a few minutes before 3.00 and staying until 3.50.’ He did, however, cut out the announcement of the visit in the Court Circular in the following day’s copy of The Times, and slip it into the diary, where it is still preserved (Fig.3).

Entries for the last two Royal visits during Summerson’s Curatorship are similarly brief, but not without his characteristic wry humour.

On 8 November 1955 he recorded: Pr[inces]s Alexandra and Lady Margaret Douglas-Home arrived soon after 3.00’ – there had been a telephone call in the morning – ‘and spent an hour in the Museum. The Princess hated it. “Creepy … there must be ghosts” etc.’ This was later reported to the Trustees as: ‘She took a cordial dislike to the Museum and accepted with reluctance my assurance that it was not haunted.’

Your own Royal visit to the Soane

To mark the Platinum Jubilee of Queen Elizabeth II, Sir John Soane's Museum is hosting a display of royal memorabilia, charting the public story of monarchy from Soane's time to the present day, with items donated by staff, volunteers, and our local community.

The exhibit is on display in the Front Kitchens until 26 June. Do follow in the footsteps of Queen Mary and pop in to take a look!