Visit the Picture Room today and you'll find four chairs, which have been returned following our reopening. Helen Dorey discusses the complex history of these fascinating objects.

In October 1823 John Soane bought a new house – No. 14 Lincoln’s Inn Fields. During 1824 he rebuilt the rear premises to provide himself with a new Picture Room to display his paintings, including two celebrated series by William Hogarth, A Rake’s Progress and An Election. It may well have been the purchase of the Election paintings, in June 1823, that spurred him to create this splendid interior, with its ‘moveable planes’ enabling three times as many pictures to be hung than would normally fit into a room only measuring just over 13 feet by 12 feet (and 19 feet high).

As originally conceived, the room was not just a Picture gallery but a library, with shallow bookcases on three sides below a brass shelf. Inventories (1837) record that there was a pull-out table in a recess on the north side. However, the only furniture shown in early watercolours of the room is a magnificent set of four Indian chairs, with what seem to have been rich red velvet cushions, and a table. The table was set in the centre, covered by a cloth, and used to display a cork model of the temple of Vesta at Tivoli. 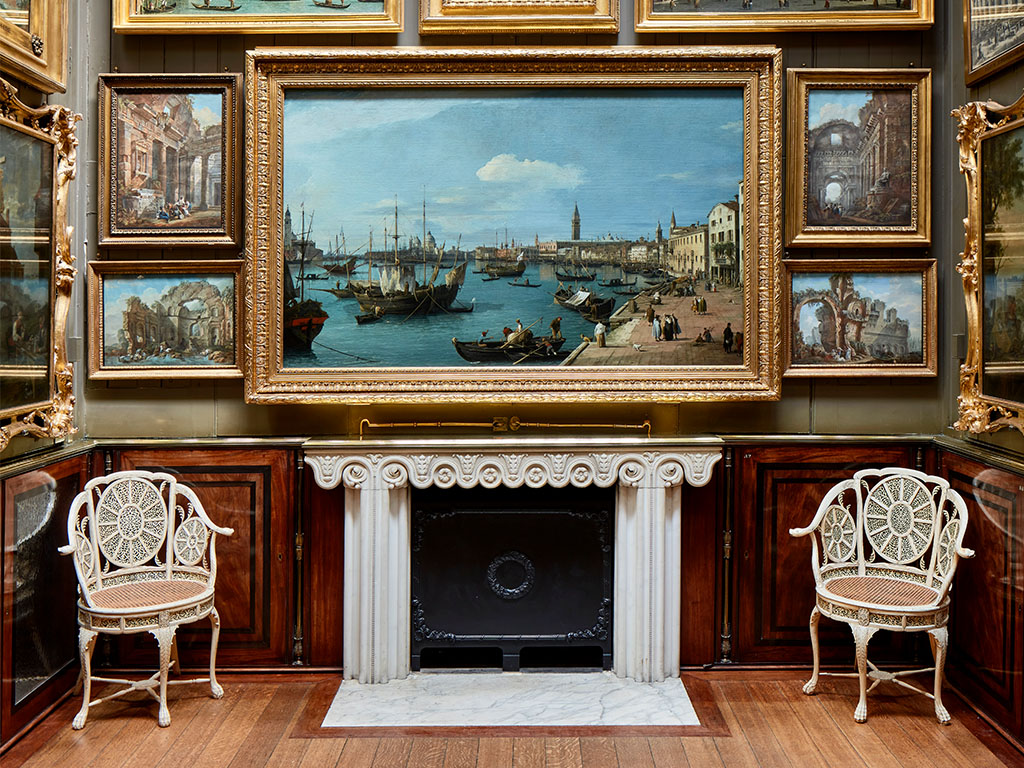 Notes in the early Soane inventories record that the table and chairs were ‘purchased at the sale of General Crewe’s effects by Richard Westmacott RA’. In fact, they were bought at the sale by a Mr Matthews who probably sold them to Westmacott. Soane acquired the furniture from Westmacott, a leading neoclassical sculptor and a close friend, in the early 1820s. There is no record of a payment and it seems possible – perhaps even likely - that Westmacott gave them to Soane specially for his magnificent new interior. Westmacott was extremely proud of Soane’s placing of his ‘Nymph’ as the centrepiece when the south planes of the room are opened.

Soane believed that the furniture had been owned by Tipu Sultan, the ruler of Mysore in southern India from 1782 to 1799 and had been seized from his palace following the fall of Seringapatam in 1799.

In the sale catalogue of General Crewe’s effects (July 1810) the furniture was described as:

These descriptions don’t refer to India nor Tipu and since General Crewe had no connection with India he may not have been the first English owner of the set.

It was the supposed provenance of the set that particularly appealed to Soane. The 1835 Description refers to the ivory chairs as ‘formerly in the possession of Tippoo Saib’. Mrs Hofland, the novelist whose text is included alongside Soane’s own in the Description, elaborates this further, enthusing about the British defeat of the ‘tyrant’ and saying that the chairs prompt recollections of ‘fallen greatness’ and ‘retributive justice’. 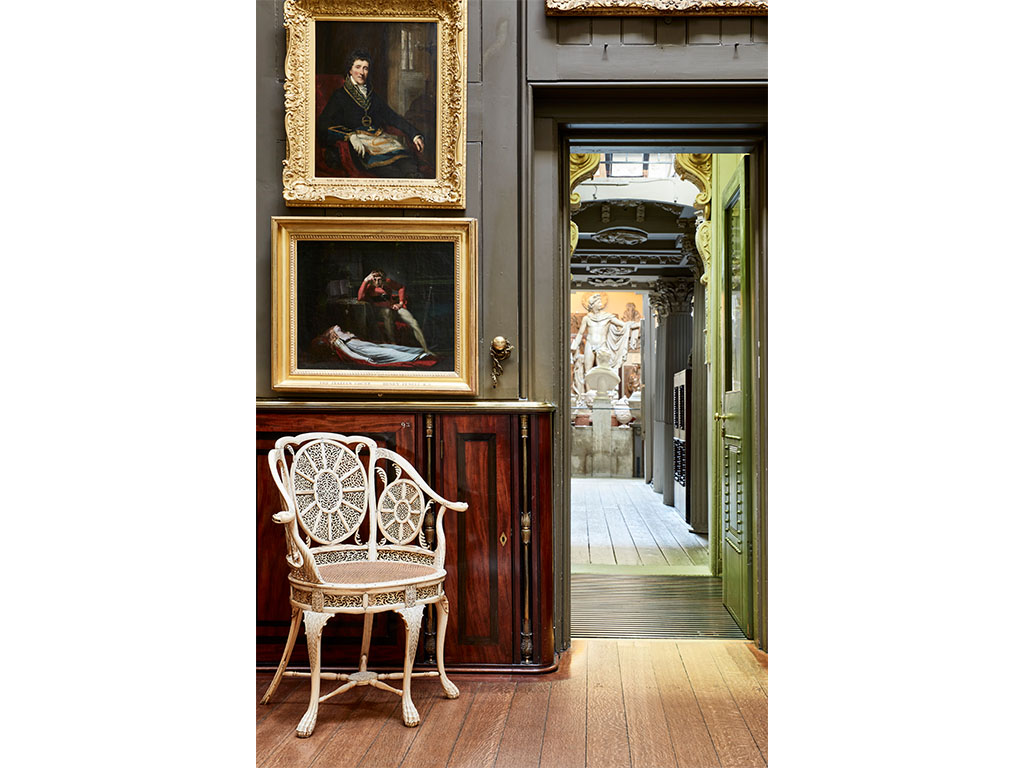 Tipu held what Moni Mohsin has called an ‘awful attraction’ for many Britons who, like Soane, had never been to India and knew relatively little of it. News of Tipu’s attempt to enlist Napoleon’s assistance in fighting the British had spurred the formation of the largest British army ever assembled in India to march on his stronghold at Seringapatam. After a long siege, the city fell and Tipu was killed, his palaces and his collections plundered. The memory of the defeat remained undimmed in England throughout the early nineteenth century – even after Waterloo – and there was a high premium on objects associated with him.

It is unlikely that the Soane furniture actually came from Seringapatam, where there is no record of Tipu having had any moveable furniture in the western sense (the only item of furniture mentioned there is his golden throne). John Britton’s Union (1827), the earliest published account of Soane’s Museum, refers to Soane’s chairs having belonged to Tipu (the first mention of this) and is – extraordinarily - the earliest known example of the association of Tipu’s name with ivory furniture and may well have been crucial in starting the general myth of a Tipu provenance for much Indian ivory furniture. The inclusion of tiger-head motifs on such furniture and, in the case of these chairs, the modelling of the three front legs after tiger-legs, would have strengthened the association as both Tipu and his father Haider Ali (whose name means ‘tiger’) were associated with such symbolism. Tipu was known as ‘the Tiger of Mysore’. As Amin Jaffer has noted, the British would have been aware of the Tipu legend but ignorant of how widespread tiger motifs are in Indian art.

In fact, the Soane furniture was probably made in Murshidabad in Bengal, an important centre of ivory carving, where British influence led to the manufacture of western-style furniture.

In 2007 Sir John Soane’s Museum commissioned Moni Moshin (a novelist from Pakistan) to write about this furniture. She described movingly the contrasting perceptions of Tipu in Britain and in Pakistan where he remains a hero for Muslims and is revered as a freedom fighter against the British and for the administrative and technological advances made during his reign.

The reduction in visitor numbers as a result of Covid-19 has enabled us to replace the four magnificent chairs in the Picture Room, where Soane displayed them.