Lockdown travel with the Soanes: Margate

We're examining the travel of the Soane family in a series of excerpts from At Home with the Soanes: Upstairs Downstairs in 19th Century London, by Susan Palmer. In part 1, we examined the Soane family's leisure trips to Chertsey. In today's exerpt, we join the Soanes on a trip to the Kentish seaside resort of Margate. If you have enjoyed this article and would like to read more you can order a copy at Pimpernel Press' website or preorder a copy at our online shop.

Besides these visits to Chertsey, Mrs Soane also had a summer holiday. By far and away her preferred destination was Margate, the most fashionable of the Kent seaside resorts. Here she would repair with the boys, a man and maidservant, Fanny the dog and usually a female friend for about six weeks in late August or September, the timing varying a little depending on how quickly the resort had filled up that year. 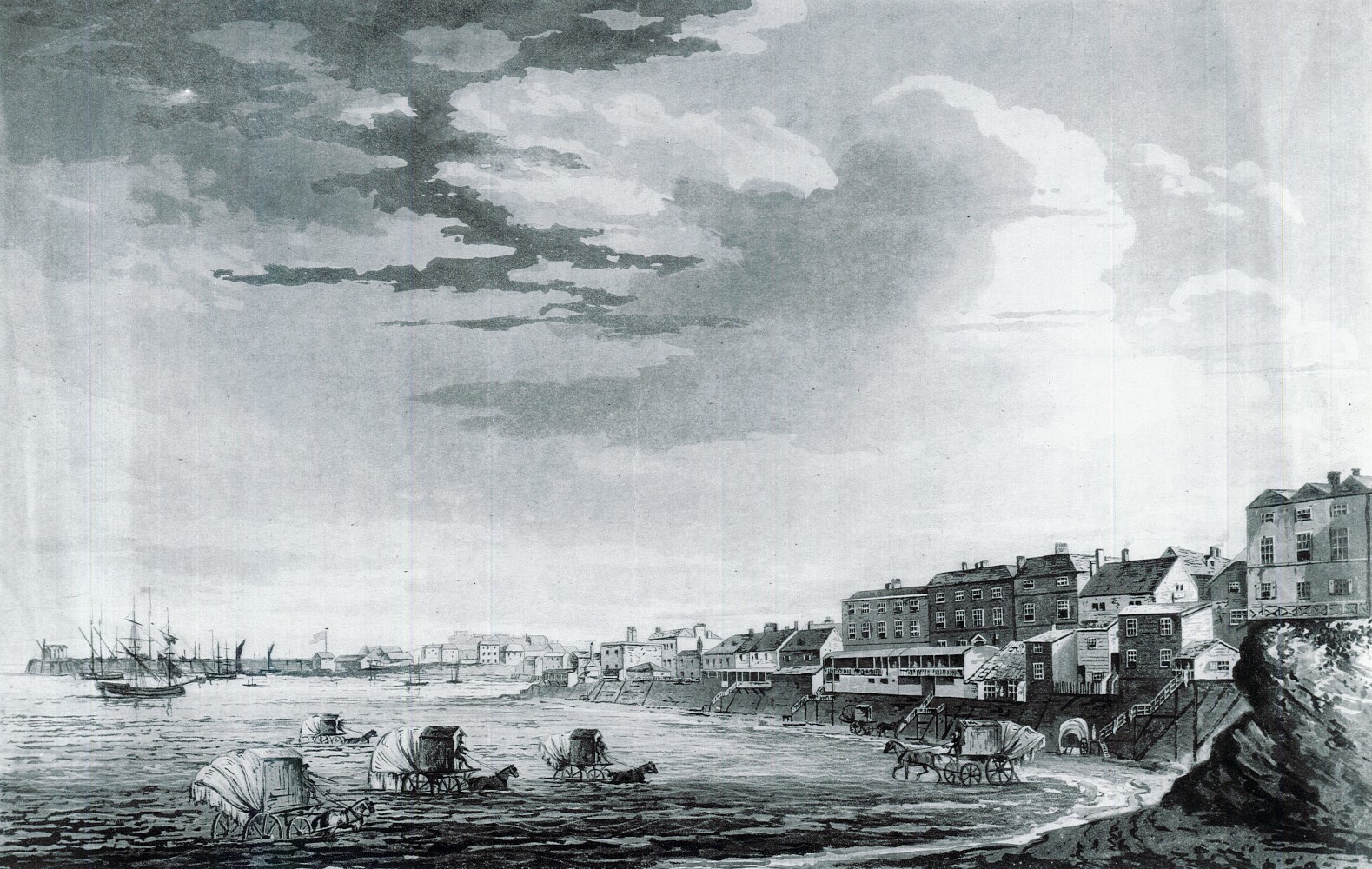 A view of Margate with the Bathing Place from a drawing by J Smith, published in 1786. Private Collection

Armed with the £50 which Soane always gave her for her expenses before setting off, they would travel down in the carriage, the journey taking the best part of two days. Their trunks had to go by sea, on one of the sailing ships or hoys that plied between London and Margate. As they got older one or both of the boys would often travel by sea too. Usually this only took about eight hours, but occasionally contrary winds would delay the journey, and on 21 August 1809 Mrs Soane reported in a letter home that poor George had been all night aboard. 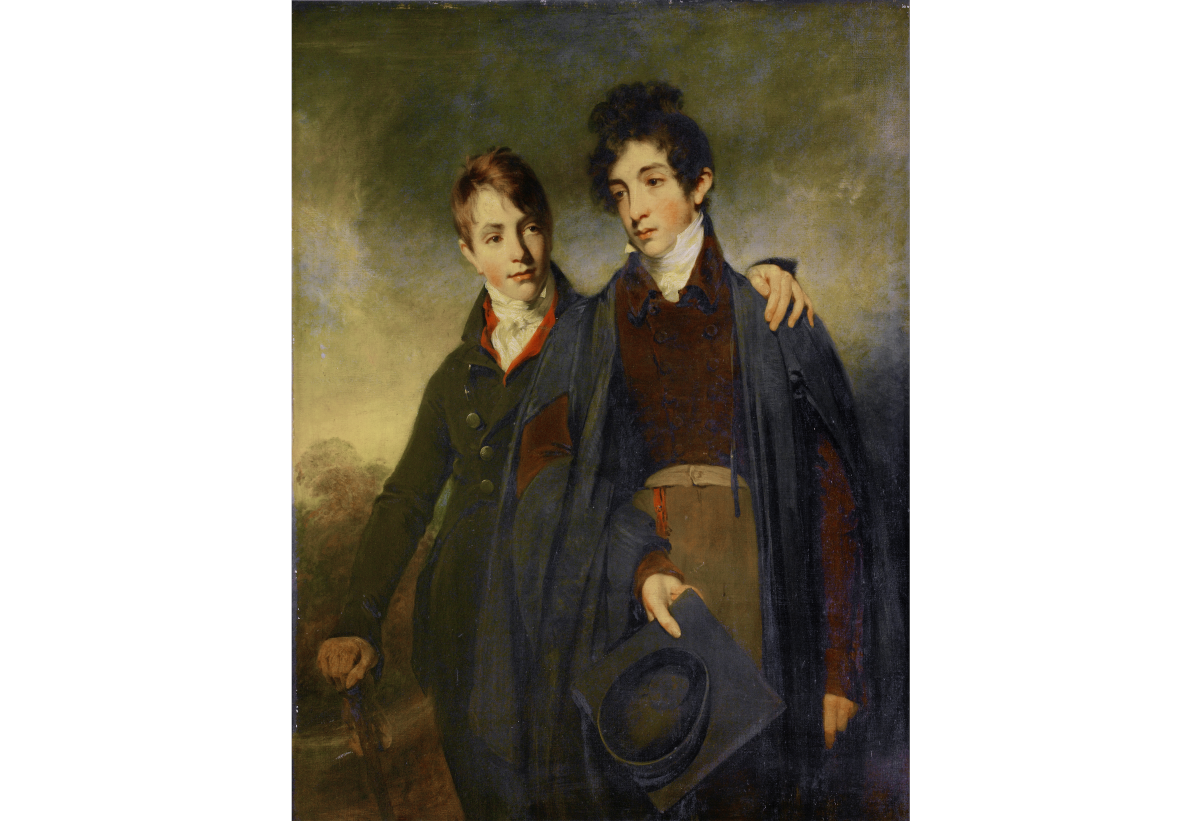 On arrival the first task was to find somewhere to stay. It was not necessary to book accommodation in advance as the circulating libraries, of which there were three in Margate, acted as accommodation agencies. Rooms in boarding houses were available, but by far the preferred option, and Mrs Soane was no exception in this, were rooms in a lodging house. The Margate and Ramsgate Guide in Letters to a Friend of 1797 quotes a rate of 1 guinea per week for a parlour, chamber and the use of a kitchen in lodgings near to the sea. On 21 August 1809 Mrs Soane wrote to her husband to tell him that they had found a comfortable and splendid house with plenty of room at 36 Hawley Square. She was not always so lucky however, as she wrote from Brighton on 22 April 1811 complaining that they had to pay 2½ guineas per week and 4s each for the use of the servants (she had clearly travelled without hers on this occasion). She continued that she did not like what she had seen of the company in the house ‘who appear proud and insolent’. By far the worst constraint however appears to have been that Fanny’s presence was barely tolerated, and that she had to go out on a lead following an order promulgated after a scare about mad dogs. She finished by saying that she was determined to take a lodging, and asked Soane to spare the Cook and send her down.

A number of friends from London were usually in Margate or neighbouring Ramsgate at the same time, so there were visits to be made and dinner invitations to be exchanged. In August 1803 John Braham and Nancy Storace the singers were in Margate. Soane had sent his wife a gift of venison and she writes to describe a large dinner party, twenty-one of them without the boys, to which the singers were invited. Not having a cook or the convenience for dressing such a dinner she reports that she sent the meat to Kidmans [Hotel] and they had the whole there. After the meal Nancy evidently sang, for Mrs Soane reports that Soane’s friend Mr R Bosanquet was too ill to come but came to coffee and heard the singing. She further reports that he has introduced them to Captain and Mrs Bynn of the Texel, where they are engaged to dine and attend a ball. 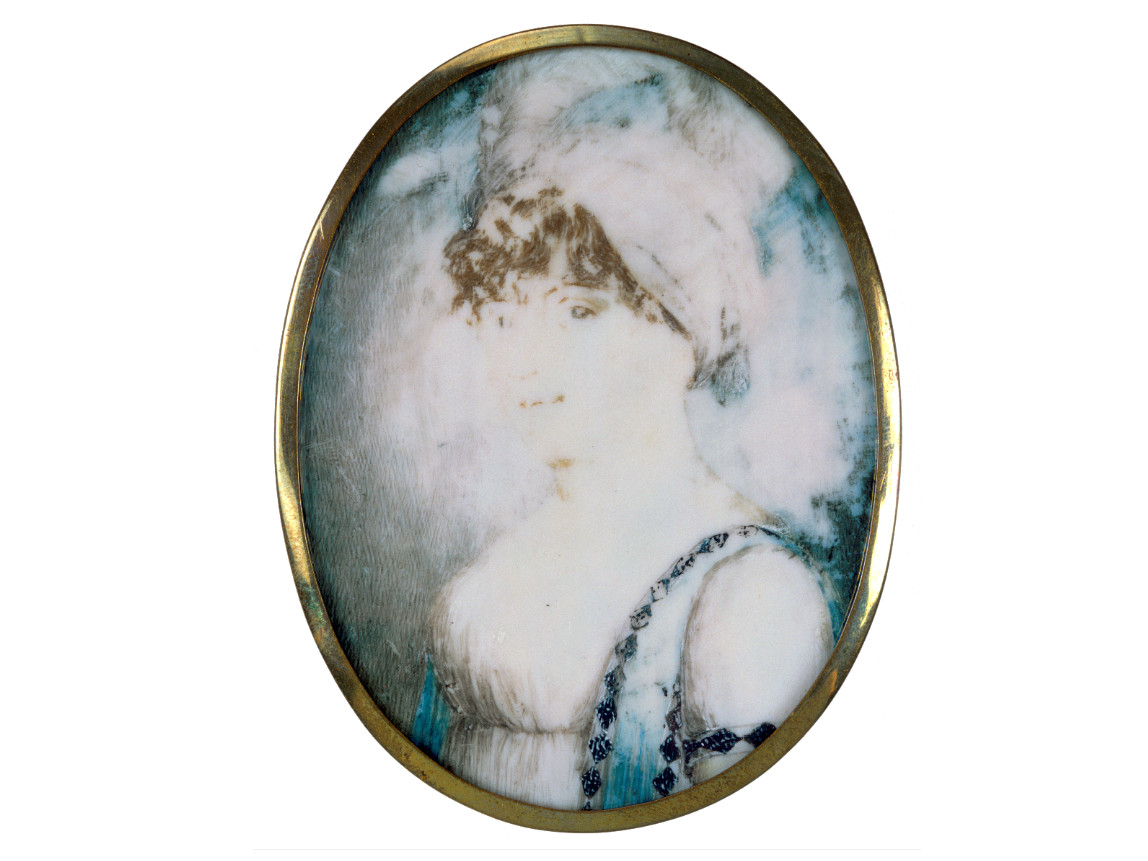 The Assembly Rooms in Margate were another great source of evening entertainment. In July 1796 Mrs Soane wrote to her friend Sally Smith, who she hoped would be allowed to accompany her to Margate that year, urging her to come as ‘we shall have such merry doings there’. In her next letter she asks her to bring her hat (which she had evidently left behind in Chertsey) as she intends ‘to shine in the Rooms’. In 1797 the subscription to the Assembly Rooms was ½ a guinea for the season. There were balls twice a week, card playing, tea and coffee drinking and a band at lunchtime.

On 26 August 1804 Joseph Farington describes in his diary a visit to the Assembly Room in the evening ‘where there was a Promenade and a very large Company attended. One Shilling is paid by each person for admittance. – I spoke to Mrs Wheatley who was with Mrs Soane.’ In fact on this occasion Mrs Soane and her friend were staying at Ramsgate, as Farington recorded a few days earlier on 17 August. He further records the details of an evening spent at the Ramsgate Assembly Room on 11 August 1804 ‘where Madame Bianchi sang several songs to a Piano forte & Meyer played on the harp. At ½ past 9 the music was over. 7s 6d was paid by each person for admittance. A Ball then commenced. At Eleven we came away. There was much Company.’

Mrs Soane’s accounts of the social life of Margate are supplemented by a small group of letters written to John Soane junior in the autumn of 1807 by Laura Chapman, the daughter of his old schoolmaster, to whom he was secretly engaged for a short period in that year. She describes balls in the Assembly Rooms and laments that they will be in want of beaux unless a regiment soon appears: two or three Companies of the 32nd are there but they are under marching orders for Portsmouth.

The circulating libraries also offered evening entertainment, including concerts, and Mrs Soane records that Nancy Storace gave a benefit on 27 August 1803. There was also a permanent theatre, the Theatre Royal, erected in 1787. Both Nancy Jordan and Mrs Siddons played there, and Laura Chapman’s letters describe several performances by Master Betty, a popular actor, several of whose performances the Soanes attended in London.

During the daytime there were the pleasures of strolling around – Laura Chapman mentions walking on the Fort – or of visiting nearby places such as Ramsgate. Donkey riding was one of the entertainments available, and one imagines the two boys must have indulged in this pastime. Certainly on a later holiday in Brighton in May 1811 Mrs Soane mentions in a letter home that John has just returned from a ride, and goes on to complain that each one costs 7 shillings, and donkeys only half as much. There were also the pleasures of the circulating library for the reading of newspapers and magazines, the reading and borrowing of books, meeting people and exchanging gossip and purchasing stationery, fancy goods, trinkets and Tunbridge ware as souvenirs. The shops attached to circulating libraries ran frequent raffles of their goods and on 8 September 1809 Mrs Soane wrote to her husband that the boys had just won nearly 5 guineas for 3 shillings; the master of the shop only being willing to give goods rather than money they were having great fun choosing what to take. 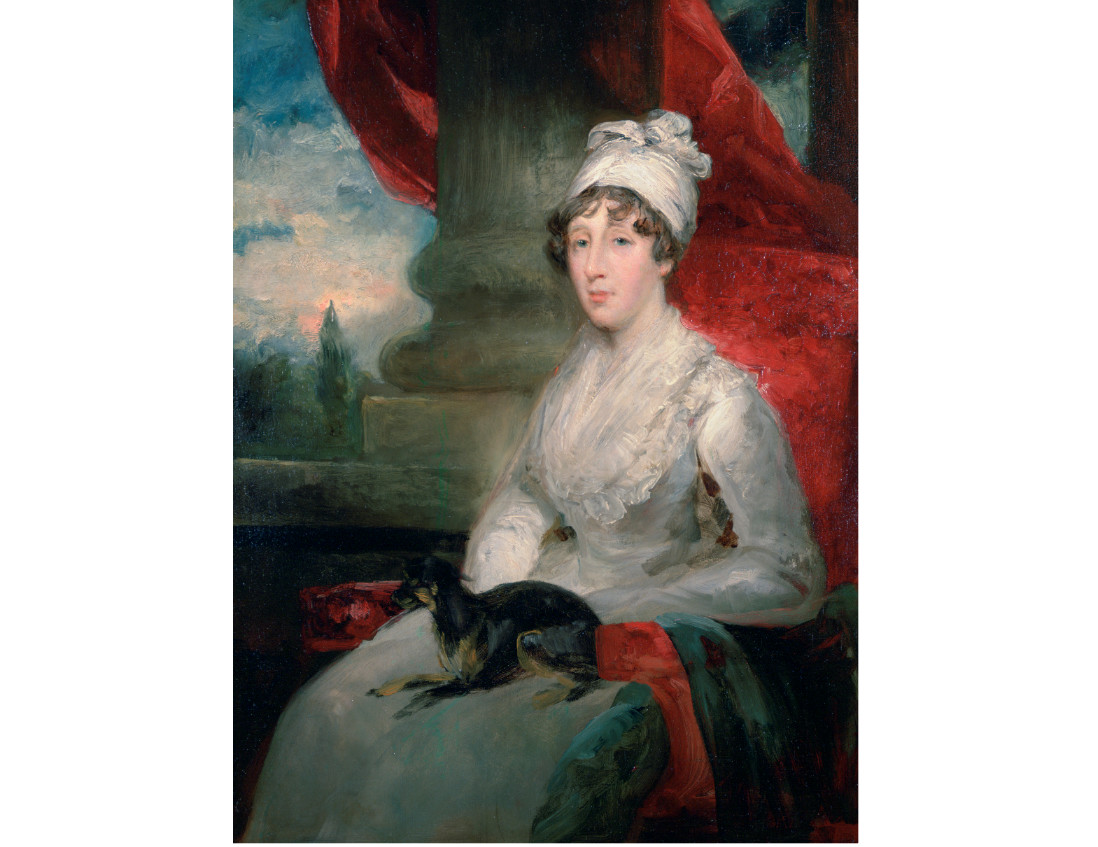 Portrait of Eliza Soane with Fanny on her lap by John Jackson. SM P148

When the pressure of business would allow Soane would join his family for a few days by the sea. On 25 August 1796 he records in his diary that he left London in the morning Diligence with Mr Hatton, leaving again at 6.00 am on 29 August and getting home about 9.00 in the evening. Whilst there he records visits to Ramsgate and to Kingsgate, where a party of them dined: Mr T Dance, Dr West, Miss West, Mrs Thomas and Miss Smith, Mrs Soane’s young friend from Chertsey. In September 1806 he records trips to Minster and to Pegwell Bay and a trip to Canterbury with his son John. There are records, too, of dining with numerous friends, often including Braham and Storace. 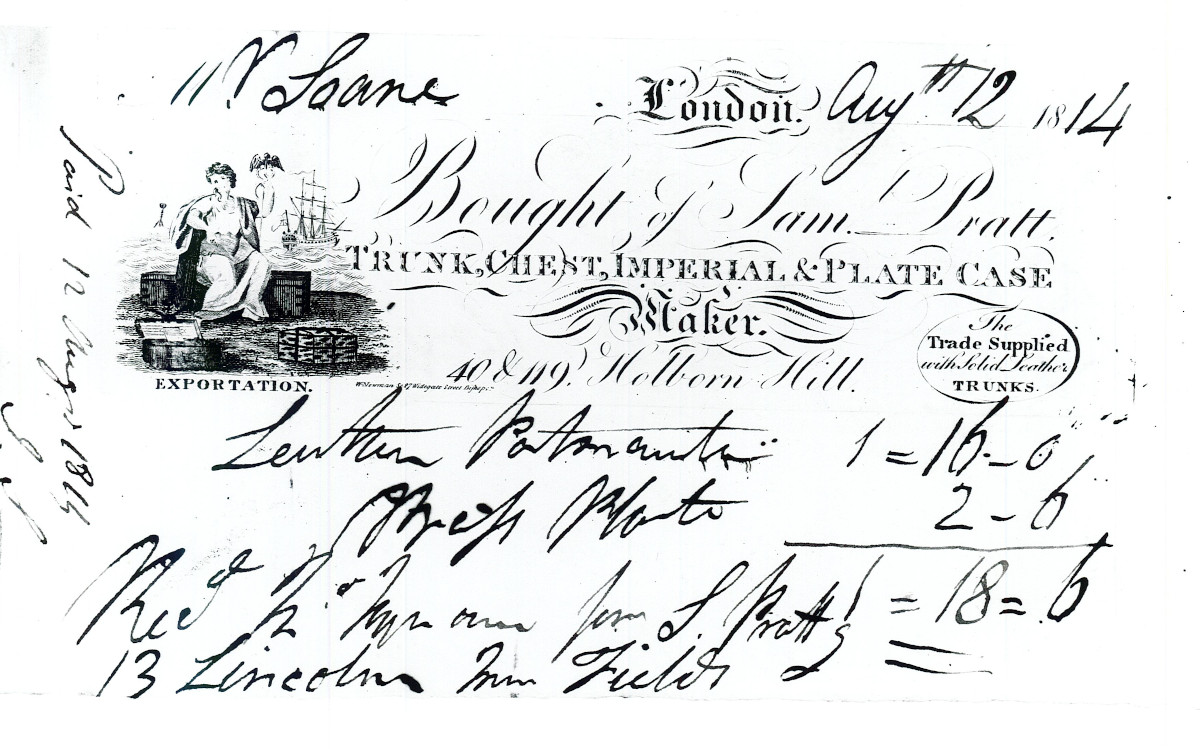 Last, but by no means least in the daily round, there was sea-bathing – the very reason for the growth of the resort in the first place. The sea air, and in particular sea-bathing were held to be very beneficial to health. Margate was particularly good for bathing because of its flat sandy shore and calm sea. Bathing was done from bathing machines which were drawn into chest-deep water by a horse. The bathers descended into the water through a door at the back and down some steps, and a canvas umbrella was then let down to conceal them. Women wore flannel gowns to bathe, which they put on under their clothes in the morning. The bathing rooms at the back of the High Street through which one gained access to the machines were open from 6.00 am, and guidebooks advised one to get there about 7.00 am to put down one’s name. One’s turn apparently often did not come about until about 9.00 am when the rooms were busy, and in the meantime people assembled and conversed. The terms for using these machines, according to the Kent volume of Brayley’s Beauties of England and Wales of 1808, were 1s 3d for a lady taking a machine with a guide, or 1s for two or more ladies. For gentlemen the rates were 1s 6d or 1s 3d. Gentlemen also had the option of bathing themselves at 9d. Children cost 1s 3d or 9d for young children.

Besides sea-bathing there were warm baths. In September 1811 while staying at Ramsgate Mrs Soane reports that she intends going into the Warm Bath the following day. She asks Soane to ask their doctor, Mr Pennington, whether she should go in to the Cold Bath to ‘take off that nasty little fever [she] is plagued with at times’. Evidently he had advised against it as her letter has been annotated by Soane ‘must not’.