Lockdown travel with the Soanes: Harrogate

As lockdown continues, we're joining the Soane family on their travels in a series of excerpts from At Home with the Soanes: Upstairs Downstairs in 19th Century London, by Susan Palmer. You can read part 1, on the Soane family's trips to Chertsey, and part 2 on the Soanes' trips to Margate. If you have enjoyed this article and would like to read more you can order a copy at Pimpernel Press' website or order a copy at our online shop. 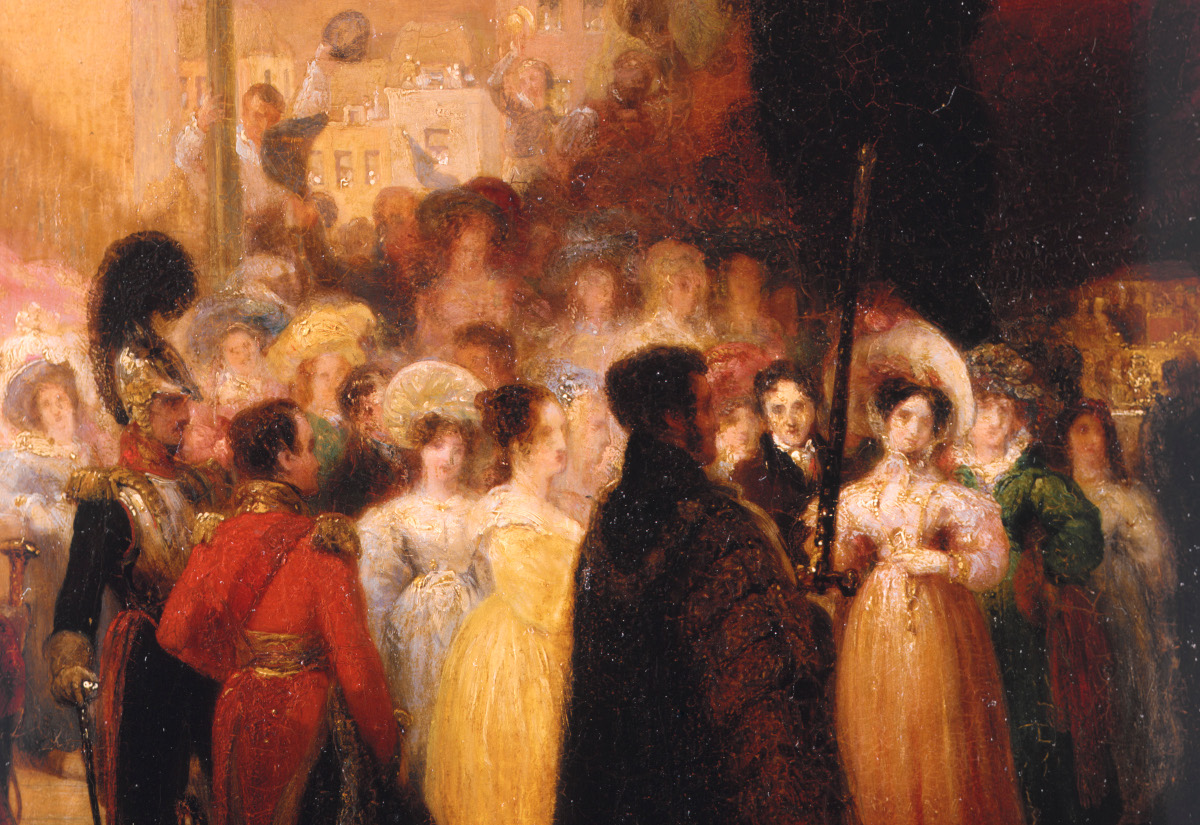 Mrs Sarah (Sally) Conduitt, who acted as Soane’s Housekeeper from 1816, shown here (in a yellow dress and white bonnet) with Soane facing the Lord Mayor at the Opening of London Bridge in 1831, in a detail from a picture by George Jones. SM P247 (detail)

After Mrs Soane’s death in November 1815 Soane did not again holiday in Margate or the surrounding resorts, turning instead to Harrogate in Yorkshire, Bath, Brighton, Cheltenham and to Worthing and Hastings. His first visit to Harrogate was in July 1816 in the company of [his friends] Mr and Mrs Conduitt and Mrs Hofland, besides his manservant, Joseph Beynon. Mrs Hofland must have proved a good guide as, born in Sheffield, she had lived in Harrogate for several years prior to settling in London at the end of 1811. Nevertheless, Soane prudently sought advice from friends before setting out, being advised in a letter from Samuel Thornton dated 14 June 1816 that his niece, who has just returned from Harrogate, informs him that Mrs Woodland of the Green Dragon Hotel is the best person to apply to for private lodgings as the Mistress of the Granby, the largest Inn, has not conducted it well. Mr Richardson, he continues, is an apothecary of some skill, and his name, or that of Mrs Milne’s, his niece’s mother, will serve as an introduction to him. 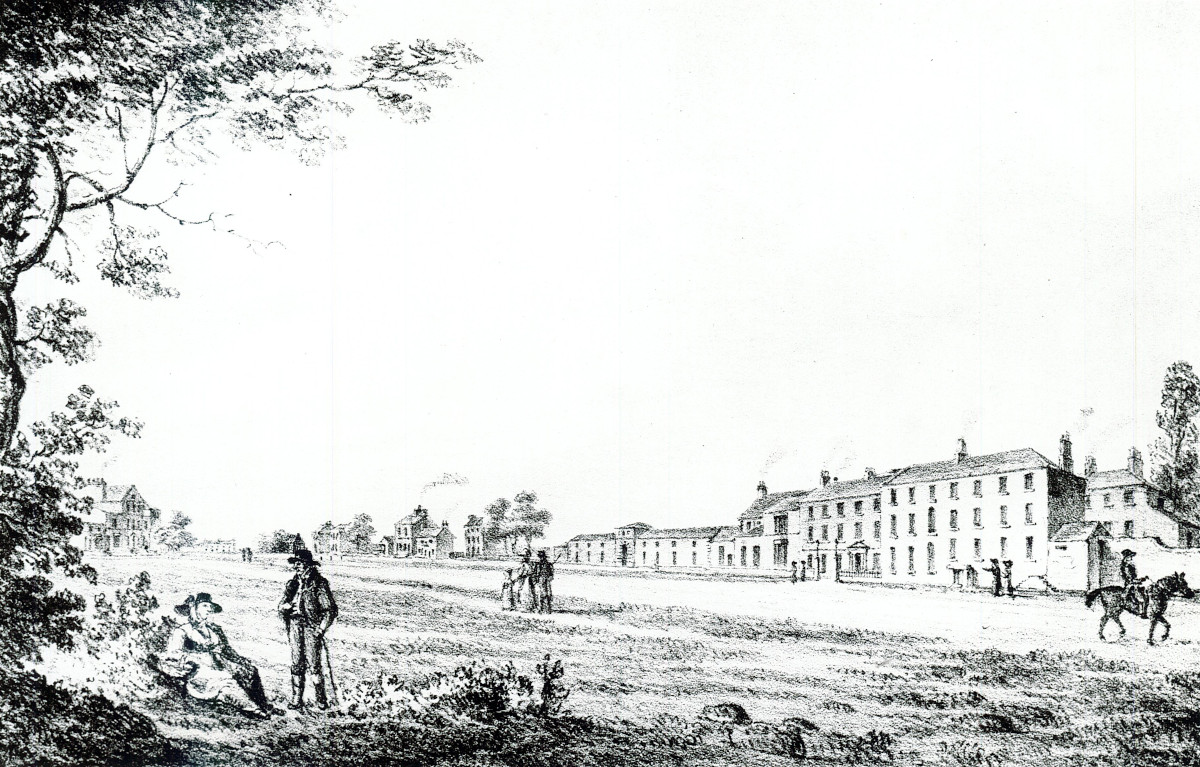 A View of High Harrogate engraved by J Stubbs in 1829. The Green Dragon Hotel is on the right. Private Collection

Both of the inns mentioned were in the more fashionable Upper Harrogate. Unlike the south coast resorts, the infrastructure was not such as to support the growth of individual lodgings. All visitors stayed in one of the many inns available. Private parlours could be rented, but all meals were taken communally, the table being presided over by the person who had been staying longest, and whose job it was to smooth over social blunders. Controversial subjects of conversation such as religion or politics were banned.

Joseph Farington, who visited Harrogate in 1801, included this description of the customs of the house in his diary entry for 30 August:

‘The arrangement at Harrowgate is as follows.

A Collection for Wine & liquors of all kinds is made daily after dinner at each table for the preceding day. – The Bill for other things remains till called for. [He reveals in a subsequent entry that 6s a day was charged for meals] – Fruit is brought in by different persons both at Breakfast & after Dinner in baskets, and offered to each Individual who purchases or not as He or She may be inclined. – An intercourse of civilities is kept up between the Company at the Green Dragon & the Company at the Granby. A general invitation to a Ball, to begin at ½ past 7 is sent from each House in turn. Those who go pay one Shilling on entering the room, & such Gentlemen as Dance pay each four shillings more. The Ladies do not pay anything in addition if they dance. These Balls do not continue long, as it is customary for the visiting Company to return to their own House to Supper. – about Eleven o Clock.’

The season was short in the northern spas, beginning late, in July, because of the climate. Thus they did not warrant an elaborate assembly room like those of the southern spas. The social life centered around the long rooms of the large inns where balls were regularly held. There were also shops to be visited, two circulating libraries for newspapers, books and exchange of gossip, the drinking of the waters and bathing for the improvement of health, and excursions to neighbouring beauty spots. 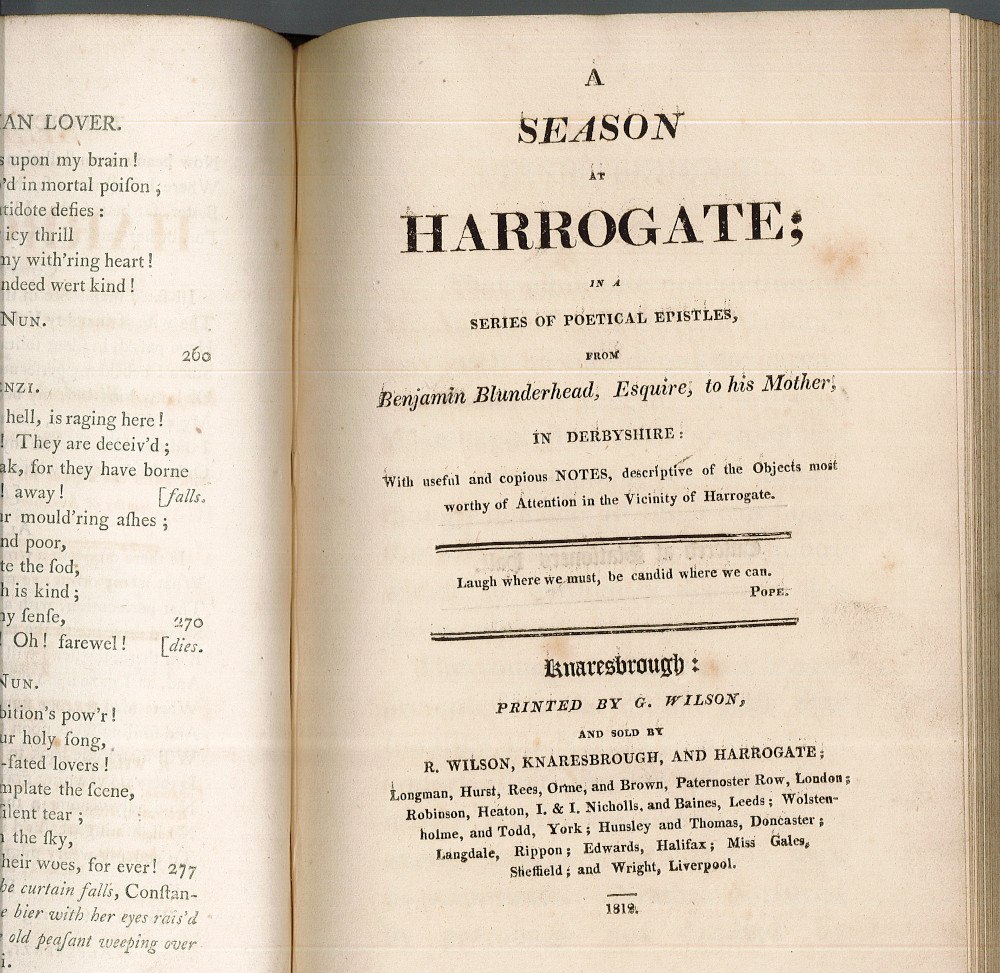 Frontispiece to Soane’s copy of A Season in Harrogate by Barbara Hofland, 1818

Mrs Hofland had published in 1812 A Season at Harrogate in a Series of Poetical Episodes, from Benjamin Blunderhead, Esquire, to his Mother, in Derbyshire … which describes, very amusingly, all these pastimes. All the excursions mentioned therein were taken by Soane’s party; they went to Plumpton Rocks, to Knaresborough, to York, to Castle Howard, to Studely Park and Fountains Abbey and to Rippon Minster. Besides these outings Soane records that he drank the waters most days and partook of a warm bath on several occasions.

He returned to Harrogate the following year and on several subsequent occasions. In 1824 he still evidently favoured the Green Dragon Hotel, as a letter survives from Thomas Ripley, the proprietor, to Joseph Beynon, Soane’s manservant, regretting that the parlour Soane had before is occupied, but promising to try and accommodate him. In the event this was clearly not possible as letters written to him in Harrogate that year are addressed to Hattersley’s Hotel, which he describes in his diary on 11 August as being ‘between upper and lower Har[rogate], an excellent House, and civil and clean people’.