The series of English painter and engraver William Hogarth (1697-1764) are almost 300 years old. Yet these works remain accessible today: their criticisms of society and immorality continue to be just as cutting and relevant, and they retain their brilliant wit and sometimes dark humour. With our forthcoming exhibition Hogarth: Place and Progress under a month away, we give a brief introduction to William Hogarth.

William Hogarth is one of the most important British artists of the 18th century. He had extraordinary range, both artistic and intellectual and became the master of two mediums, engraving and painting. His elegant and intimate individual portraits and polite conversation pieces (families or groups depicted behaving according to the polite norms of eighteenth century society) preceded the innovative painted series for which he is best known today. Hogarth: Place and Progress explores these series and the moral meanings behind them.

Hogarth’s father who made a precarious living as a schoolmaster and from writing Greek and Latin textbooks. Not a particularly shrewd businessman he ended up in Fleet Debtors prison for opening a coffee house where only Latin could be spoken. This stint in debtors prison meant that Hogarth’s father could not pay for Hogarth’s education, instead from 1714 he was apprenticed to a silver plate engraver. Although he didn’t finish the apprenticeship it had a huge impact on the rest of his career. Whilst an apprentice he had to create designs to a tried and tested formula for shopcards or cheap novels, but when, in 1720, he set himself up as an independent copperplate engraver he was able to produce trade cards and satirical prints of his own invention, and in the same year enrolled at St Martin’s Lane Academy to receive training in the formal aspects of painting and drawing.

Hogarth's observations as a satirist, and his skill as an artist saw him achieve fame during his lifetime, maintaining a clientele of powerful and wealthy patrons. Soon after his death, he was the subject of the first book devoted to a single British artist, Biographical Anecdotes of William Hogarth… published in 1781, and his works were much sought after by later collectors such as Sir John Soane, who acquired two major series, A Rake’s Progress in 1802 and Humours of an Election in 1823, as well as a volume of Hogarth’s collected engravings. 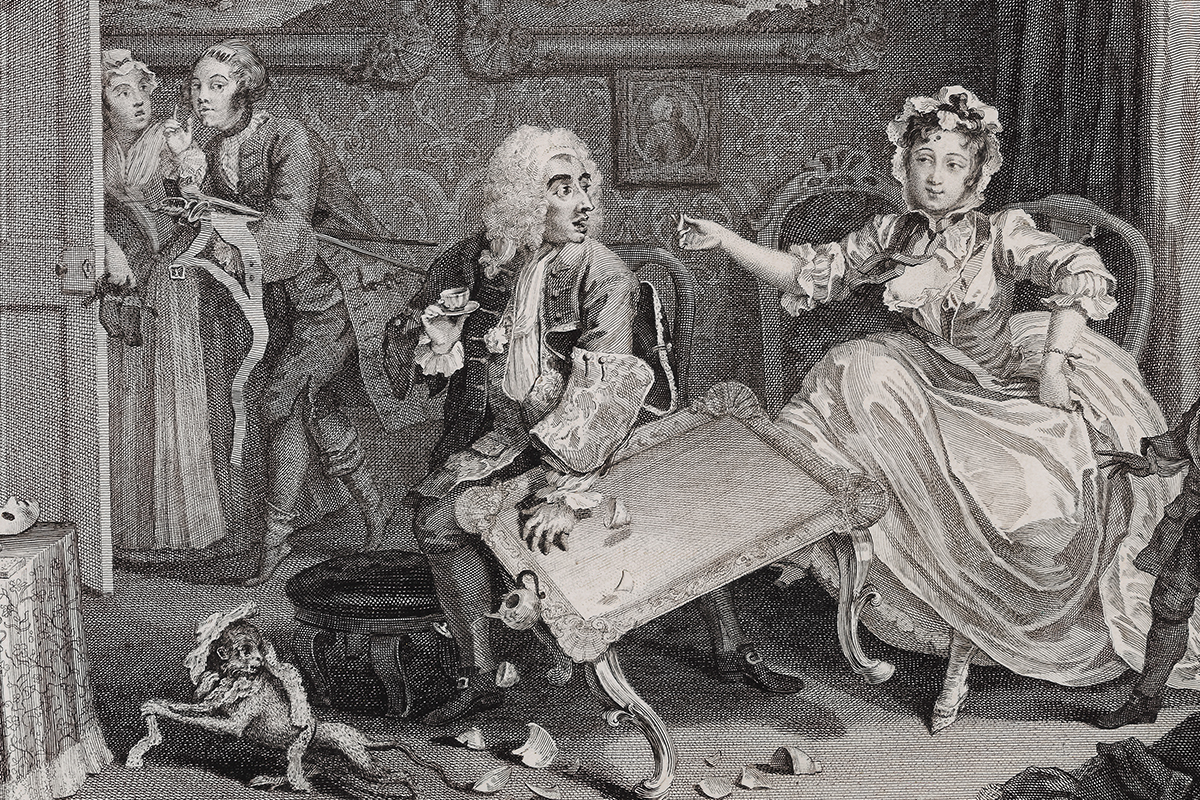 What caused his rise to fame?

Hogarth’s real success as a painter came with the creation of the first of his series: A Harlot’s Progress. In his book of Autobiographical Notes Hogarth describes with unusual candour how he had the idea for a series after becoming disillusioned with making a living from painting portrait groups. These ‘had some novelty [and] succeeded for a few years … but … that manner of Painting was not sufficiently paid to do everything my family required I therefore recommend[ed] those who come to me for them to other Painters and turn[ed] my thoughts to still a more new way of proceeding, viz. painting and Engraving modern moral Subject[s] a Field unbroke up in any Country of any age’. Hogarth’s narrative series, which he named are constructed like plays, each picture a different scene, telling a contemporary story of Hogarth’s invention, usually one with a moral message.

The idea for a pictorial sequence that depicted contemporary life (as opposed to scenes from history) came to Hogarth piecemeal, and began according to the chronicler George Vertue, with a painting of a soft pornographic kind, designed to appeal to a rakish clientele, that Hogarth showed in his studio. It was an oil sketch of a Harlot, that eventually became scene three in the series.  The prostitute in the picture was so alluring that Hogarth was encouraged to paint another to make a pair until, again according to Vertue ‘by his fruitful invention, … he made six’.

In A Harlot’s Progress, probably painted between 1729 and 1731, the protagonist is tempted into prostitution, spiralling into moral debauchery and eventually dying of siphyllis. At her wake, other prostitutes ply their wares with the other mourners, continuing the cycle of immorality and death. The series, quickly gained popularity and amplified Hogarth’s reputation. , was quickly followed by A Rake’s Progress (1734), in which the young Tom Rakewell squanders his inheritance on illicit pursuits, falling into ruin, and eventually madness, as a result.

Why did Hogarth produce series?

The series were a lucrative business for Hogarth. During this period paintings were often reproduced as engravings and then sold by public subscription through print sellers. Hogarth believed that he could cut out the middleman, the print sellers, to maximise profits by taking responsibility for engraving the prints himself as well as managing the subscription. The paintings, therefore, were in essence ‘adverts’ for the engraved series, a way to sell many more copies of a work.

This is exactly what he did with his first series A Harlot’s Progress which was finally issued in 1732 for one guinea payable in two instalments, half on subscription and half on receipt of prints. The antiquary and engraver George Vertue (1684–1756) noted that ‘daily Subscriptions came in, in fifty or a hundred pounds in a Week – there being no day but persons of fashion and Artists came to see these pictures’.

Hogarth seems to have made £1,200 from these subscriptions, which was a considerable amount in an era when a man could maintain the lifestyle of a gentleman bachelor on £500 a year.

The success of A Harlot’s Progress led Hogarth to plan a second series A Rake’s Progress, but he was so disturbed by pirate engravers stealing his designs that, with help from influential friends, he pushed an act to protect his copyright through Parliament in 1735 before releasing the prints the day after. 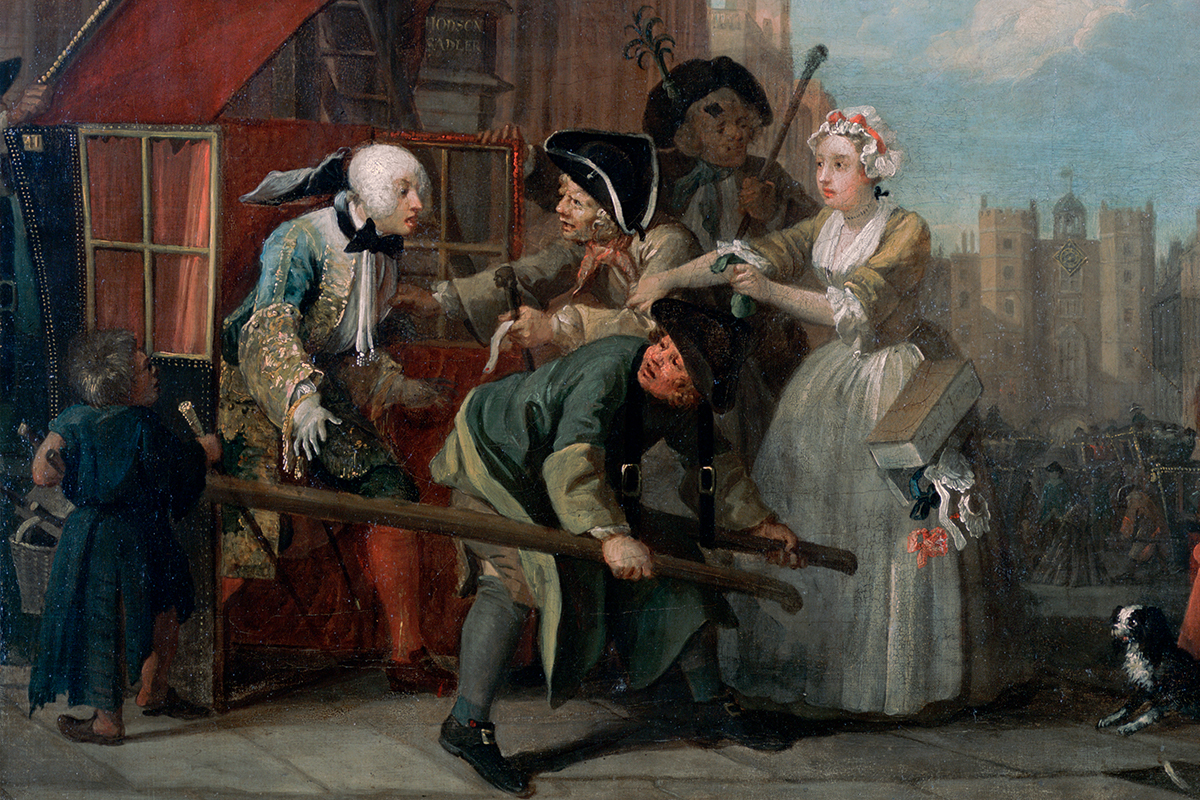 Why did Hogarth call them Progresses?

A progress was a well-known literary form at the time, popularised by John Bunyan’s The Pilgrim’s Progress, which narrates the spiritual journey of its protagonist towards moral redemption. We now see progress as essentially positive, leading to a better outcome or future, but to Hogarth’s early eighteenth-century audience the word had a different range of connotations, often negative.

Hogarth: Place and Progress opens on 9 October. Entry is by free timed ticket only: book your ticket online.