Exploring the landscape of the Soane

When the Museum reopens on 1 October visitors will once again enter through Sir John Soane’s front door at 13 Lincoln’s Inn Fields. For the first time in the Museum’s history, they will follow a one-way route through Soane’s carefully curated interiors and arrangements of works of art. Soane wrote his own descriptions of his museum, leading readers around the ground floor in his 1830 version on a route which is the one our visitors will follow. This new route will enable today’s visitors to see the sequence of interiors as its Founder intended.

Exploring Soane’s Museum is analogous to exploring a Picturesque landscape – one which begins to unfold even as the visitor arrives on the north side of Lincoln’s Inn Fields and is drawn towards the distinctive façade, projecting from the centre of the terrace and acting as an ‘eye-catcher’.

The theorists of the 18th century Picturesque movement (literally meaning ‘in the manner of a picture’) proposed the notion of ‘picturesque beauty’ as somewhere between the ‘Sublime’ (awe-inspiring vastness and grandeur) and the ‘Beautiful’ (smooth, regular and gentle), characterising a picturesque landscape as one in which various compositional elements – vista, perspective and distance, light and shadow (chiaroscuro), ‘variety’ (of form, texture, colour and even sound) and irregularity were perfectly orchestrated. Paintings were a major influence on the formation of ‘picturesque’ taste, developing conventions as to how nature should be ideally composed and viewed. William Gilpin wrote in his 1768 Essay on Prints that ‘picturesque composition consists in uniting in one whole a variety of parts’ and that this could be achieved by combining a dark “foreground” with a “front screen” or “side screens”, a brighter middle “distance”, and at least one further, less distinctly depicted, “distance”. All these elements are embodied in the composition of the architectural spaces at 13 Lincoln’s Inn Fields. 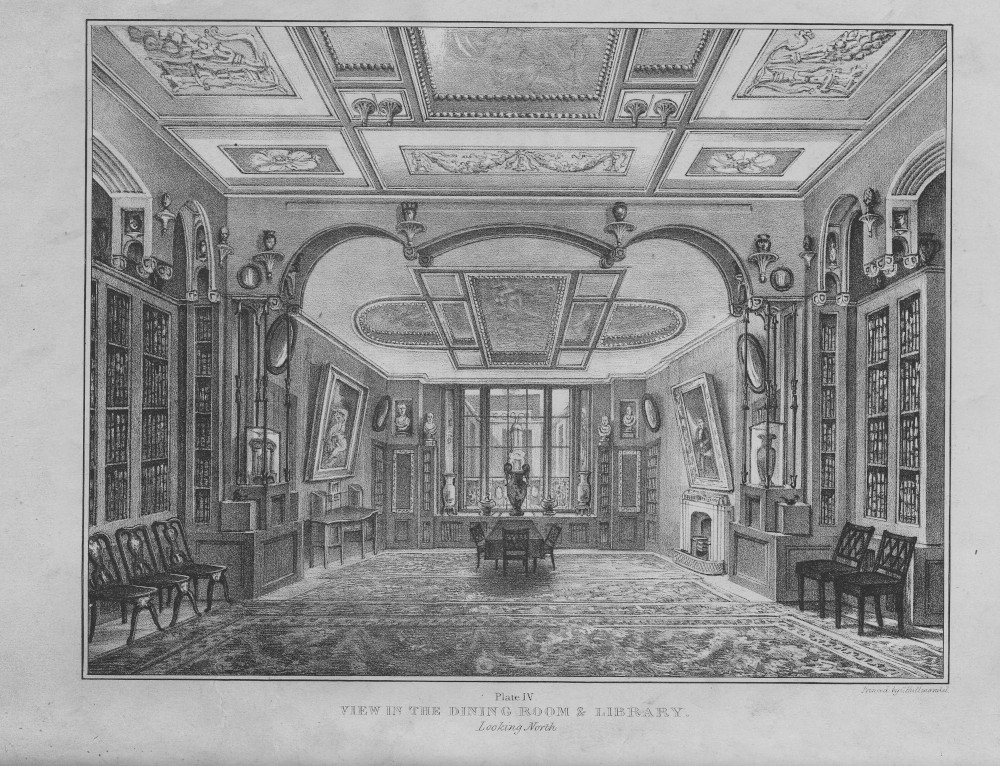 Visitors enter a dark front hall, painted in imitation of porphyry, and via an inner hall door filled with stained and coloured glass to enter an inner lobby painted in imitation of a lighter marble, giallo antico, before turning to enter the much larger space of the Pompeiian red Library Dining Room. This combined space, with a hanging arched canopy dividing it visually into the two parts, exemplifies a picturesque composition with the piers either side of the canopy combining with it to provide the ‘screens’ and beyond this frame a view out into a courtyard at middle distance and onwards to a further distant view of sculpture on the skyline (on the roof of Soane’s Office).

The convex mirrors installed at high level in the Dining Room capture, focus and frame views in the same way as the hand-held circular portable convex mirrors, which eighteenth century artists used to obtain a wide-angle simplified view with a high degree of contrast to help them develop picturesque compositions. 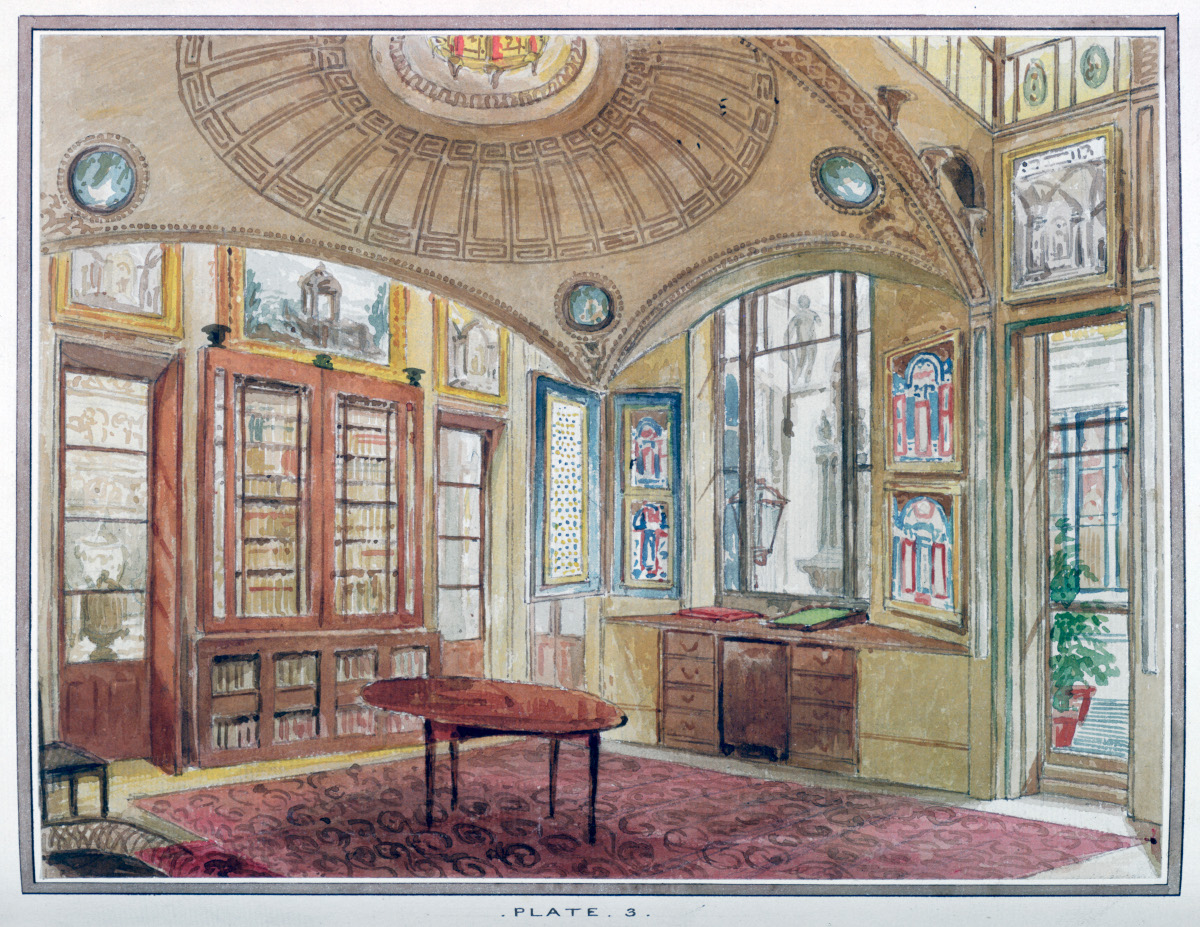 As the visitor moves on through Soane’s house it is, as Horace Walpole wrote of passing through a picturesque landscape, like ‘a journey through a succession of Pictures’, as first the domed Breakfast Room, followed by the ‘Museum’ across the back of the house, is explored. This Museum area is like a picturesque park, appended to a house, which you go out into, explore, and from which you then return. It is described by Soane using the language of the picturesque theorists, emphasizing the variety of effects and views to be found. In the Breakfast Room he notes ‘the views from this room into the Monument Court and into the Museum, the mirrors in the ceiling, and the Looking Glasses, combined with the variety of outline and general arrangement … present an almost infinite succession of those fanciful effects that constitute the poetry of architecture’. 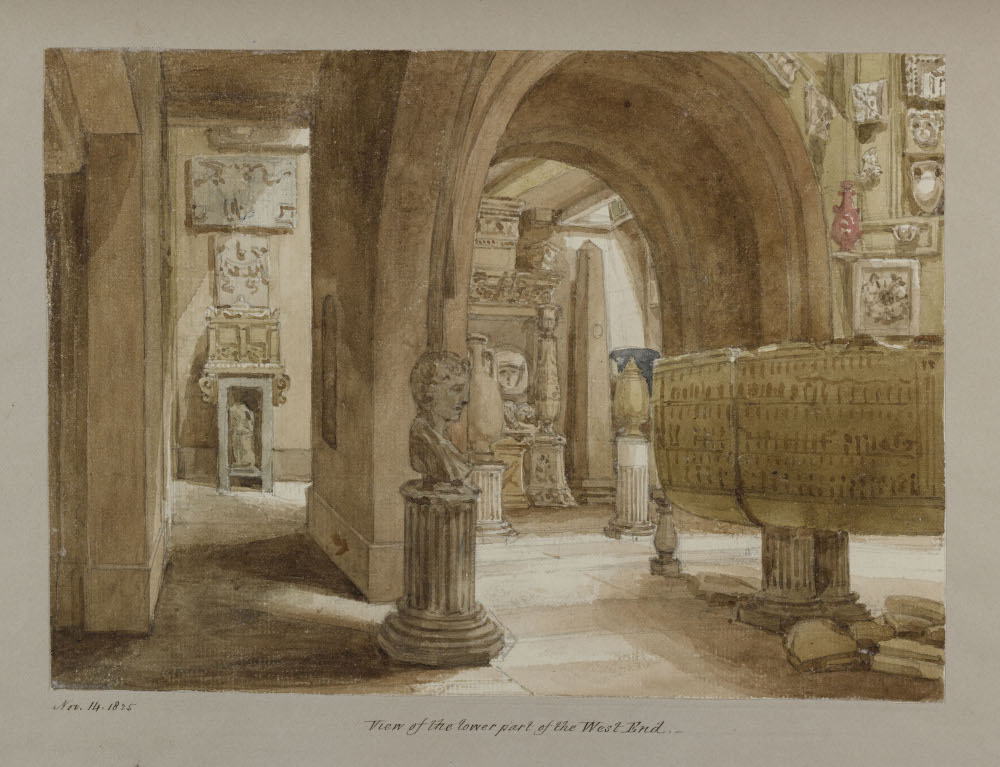 View in the basement of Sir John Soane’s Museum looking from the Basement Ante-Room towards the Sepulchral Chamber, watercolour, dated 14 November 1825, SM Vol. 82/50

Picturesque theory stressed that you should not pass abruptly from one scene to another, but that each should be connected by ‘some third species [of scene] which participates of both’. Soane achieves precisely this effect with what I would call transition spaces. The Lobby to the Breakfast Room, for example, provides an intense experience whilst transiting from the Breakfast Room to the Dome. First providing an unexpected vista from the north-west corner of the Breakfast Room and then a foretaste of the Dome as it is almost a mirror of it, but in miniature – a double-height space, piled high with works of art. Both spaces are viewed from what might be described as a ‘terrace’, over a railing or parapet, just as you might view the different levels of a garden. Similarly, the Museum Corridor provides a transition between the Colonnade and the Picture Room. The Colonnade is described as having a ‘rich variety of outline’ and offering ‘pictorial effects, from the catching lights and shades’. This language makes a direct comparison between what Soane was trying to achieve in architecture and the technique of a painter. In the basement, the Catacombs and other small, narrow passages provide transitional spaces and varied, asymmetrical routes and vistas to heart of the area, the Sepulchral Chamber, containing the sarcophagus of the Egyptian King Seti I, Soane’s greatest treasure.

Amongst the constituents of a ‘correctly picturesque’ landscape, a ruin – preferably of an abbey or castle - was considered a vital feature. Here too, Soane’s house fulfils the brief, with the mock-medieval ruins of an abbey in the Monk’s Yard, composed of fragments salvaged from the medieval palace of Westminster. In the 18th century there was a fleeting fashion for employing a hermit to animate a picturesque hermitage in a landscape – John Soane created his own imaginary solitary hermit, supposedly a former occupant of his mock abbey, whose tomb is set amidst the ruins. This holy father was his own alter ego, bearing the name Padre Giovanni (‘Father John’): with his creation Soane made himself a feature of the picturesque landscape he created in Lincoln’s Inn Fields.

The https://shop.soane.org/products/sir-john-soanes-museum-timed-ticketingMusuem reopens on 1 October. Entry is by free timed ticket. Book yours online today.