Two large portraits of Sir John Soane and his two sons, John and George, have recently returned to the South Drawing Room after months of painstaking conservation work. 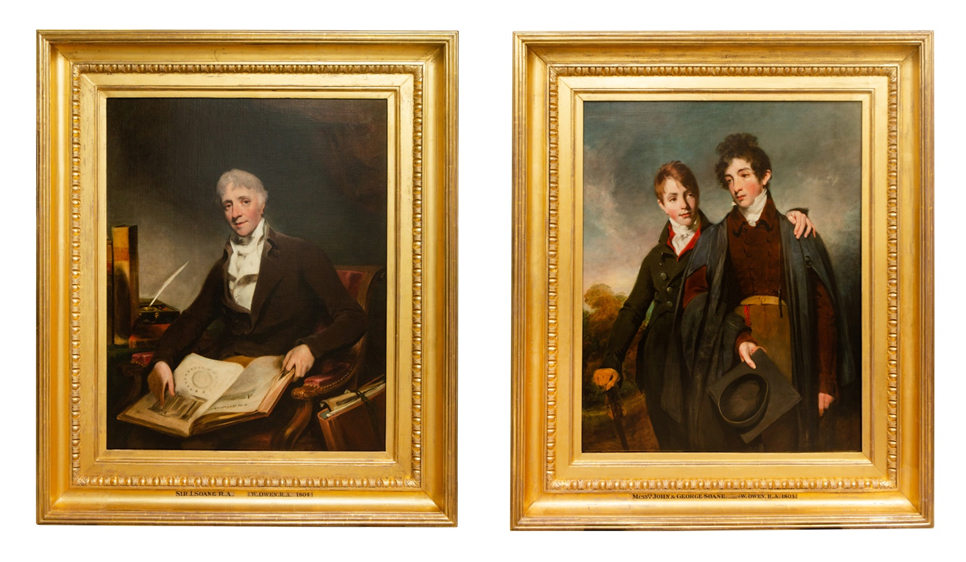 A 51-year old Soane, Professor of Architecture at the Royal Academy, points to a diagram of the Roman Temple of Vesta at Tivoli, which inspired some of his most famous designs. Alongside this portrait, a second painting depicts his two sons, John Jr and George, appearing to share this academic spark, with John Jr. sporting his Oxford gown. Sir John Soane had longed to found a dynasty of architects to rival the Adams or the Dances, and these portraits, painted by the renowned portraitist William Owen, may project these ambitions. 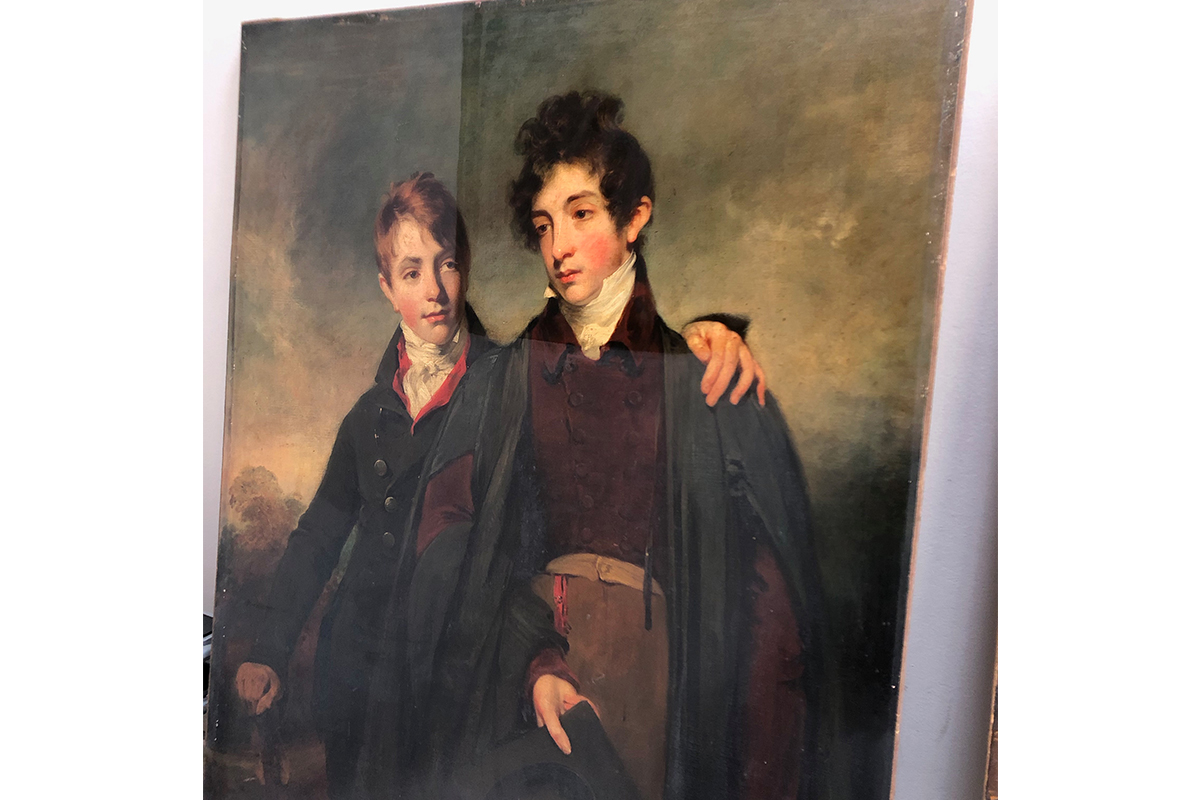 The painting of Soane's sons with the top right section cleaned

The paintings are important items in the Museum’s collection, but, after nearly 200 years on display, were in need of conservation. These two portraits are oil paintings, painted on canvas which, over time, naturally degrades, due to environmental factors such as light and humidty and sometimes by the artists’ choice of materials too. A process called ‘lining’ – strengthening a canvas by attaching a new layer of canvas to the original one with a layer of adhesive – had been used on Soane’s portrait in the nineteenth-century, and his sons’ portrait in the 1920s, but these interventions were a century or more ago, and the canvases were in need of re-lining to stablise the paint layers and to ensure the painted canvas has enough strength to be attached and held taut on the stretcher. To make the situation worse, layers of dirt and yellowed varnish had built up on the paintings, and their frames were suffering from cracking, damage and instability in the gesso beneath the gilding. 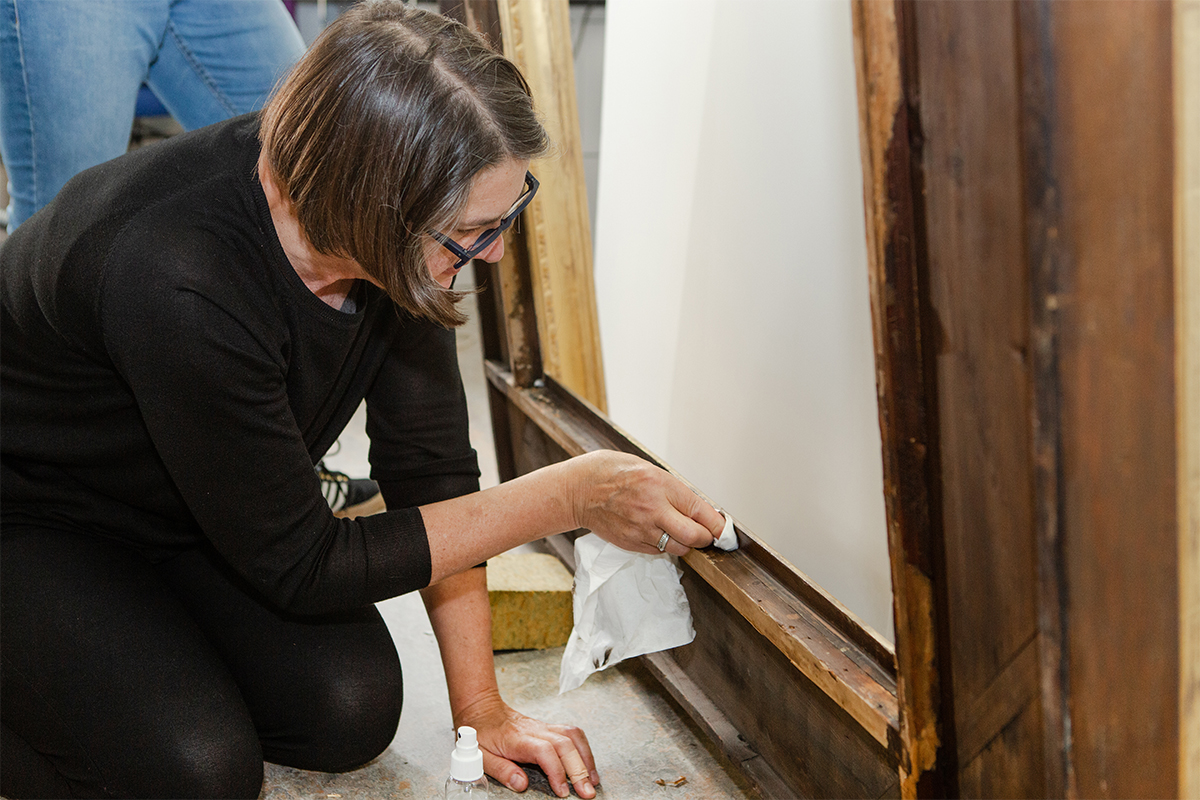 Treating the paintings was a complex process, involving a number of stages and specialists. The paintings were cleaned of dirt and grime and the yellowing varnish, and areas of flaking paint were consolidated. During this process, our conservator was able to make several discoveries – the jacket of John Jr. was revealed, for example, to have originally been a Prussian blue, rather than a green, which the yellowing varnish above had made misleading. Examination also revealed that a window may have occupied the background Sir John Soane’s portrait, but was painted out.

After the cleaning stage, a conservator began the painstaking process of re-lining the paintings on to fine linen, with an interlayer of polyester sailcloth. The interlayer provides extra strength and support to the painting and also improves its longevity. The paint losses were filled and retouched and several thin layers of Dammar varnish were applied to protect the surface of the conserved artworks. 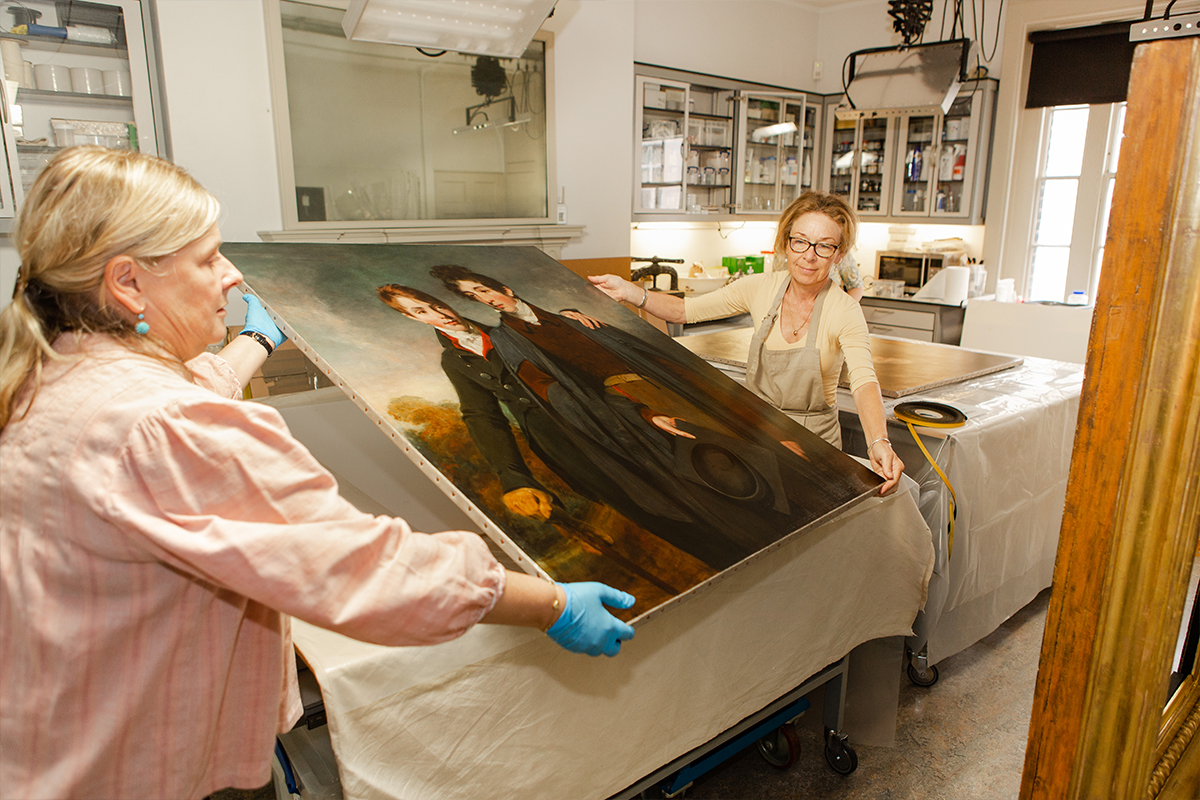 The frames were conserved on-site, taking months of careful work to return to their original state. A previous, rushed treatment of the frames in the 1980s had left patches of a murky 19th-century oil gilding over the earlier water gilding scheme beneath, and in some places residues of paint stripper were even found. Once all the oil gilding and stripper had been removed any damage was repaired and re-gilded to match the lovely Regency water gilding now revealed on the frames. 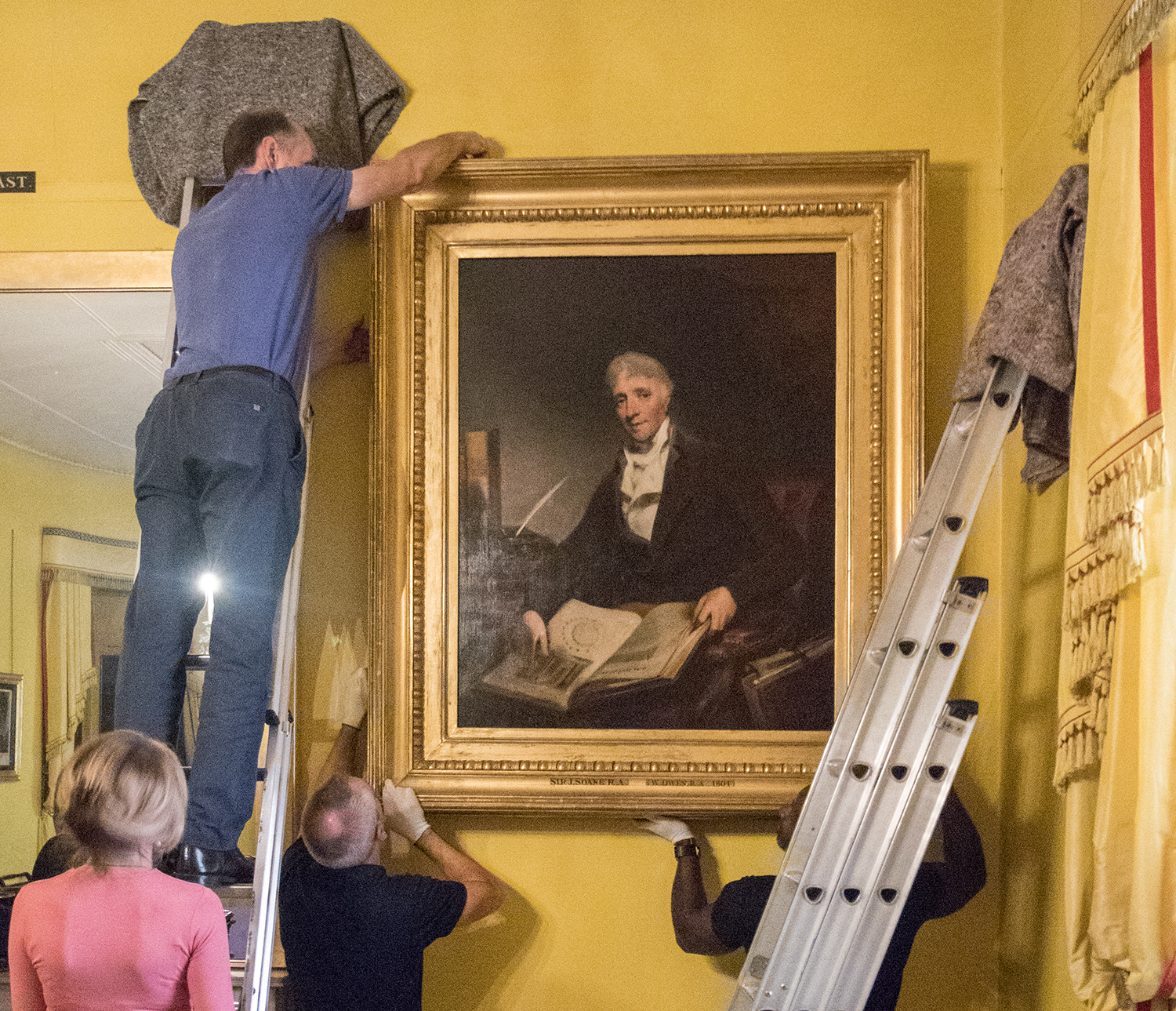 With the paintings and their frames fully conserved, the portraits were re-installed with new, stronger fixings, on the walls of the Soane. Today, these two paintings proudly hang once more in the South Drawing Room. Come and see them for yourself on a visit to the Museum.

The conservation of both of these portraits and their frames was made possible thanks to the support of a Legacy gift by Mrs Charmian Shenton, who was a longstanding friend of the Museum. Legacy gifts, however large or small, provide crucial support to the Soane’s core activities, helping to conserve the house and collection, enhance understanding of our collections and keep our doors open and free for all so that people can learn and be inspired by the story of Sir John Soane, his house and collection. Find out more about supporting the Soane with a gift in your Will, or a gift in memory of a loved one.