Sir John Soane’s Museum hosts an exhibition of shortlisted and winning entries from The Architecture Drawing Prize 2020 and 2021. Now in its fifth year, the prize attracts entries from across the world and displays the best and most innovative architectural drawing of today. Works are shortlisted and awarded across three categories: digital, hand-drawn, and hybrid.

The Prize is run in partnership with Make Architects and the World Architecture Festival. For a virtual gallery retrospective of the past five years of the prize, visit the Vault of Contemporary Art.

Explore a selection of the works on display below. Discover them in person at the Soane, from Wednesday 19 January to Sunday 20 February. Book your timed tickets here.

Winner of the Digital Category, 2021 and Winner of the Lockdown Prize, 2021, this project started with the artist drawing on-site at a quarry in the South Downs. However, the intervening lockdowns meant that the site could no longer be visited. Higson continued to engage with it through scans, photogrammetry, scale models and dioramas in his bedroom. In this image, a ‘roaming giant’ machine is positioned on the bed, which also comes to represent the landscape, and in doing so the room has been transformed into the actual architectural site, thus presenting an immersive, timely example of working from home.

Narinder Sagoo, Senior Partner at Foster + Partners and one of the Prize judges, explained that the work was selected as winner of the digital category because it ‘creates a Soane-like montage of models, photos and paintings within a two-dimensional picture plane. A drawing within a drawing, and more. One could explore this piece time and time again, discovering another level of genius each time.’ 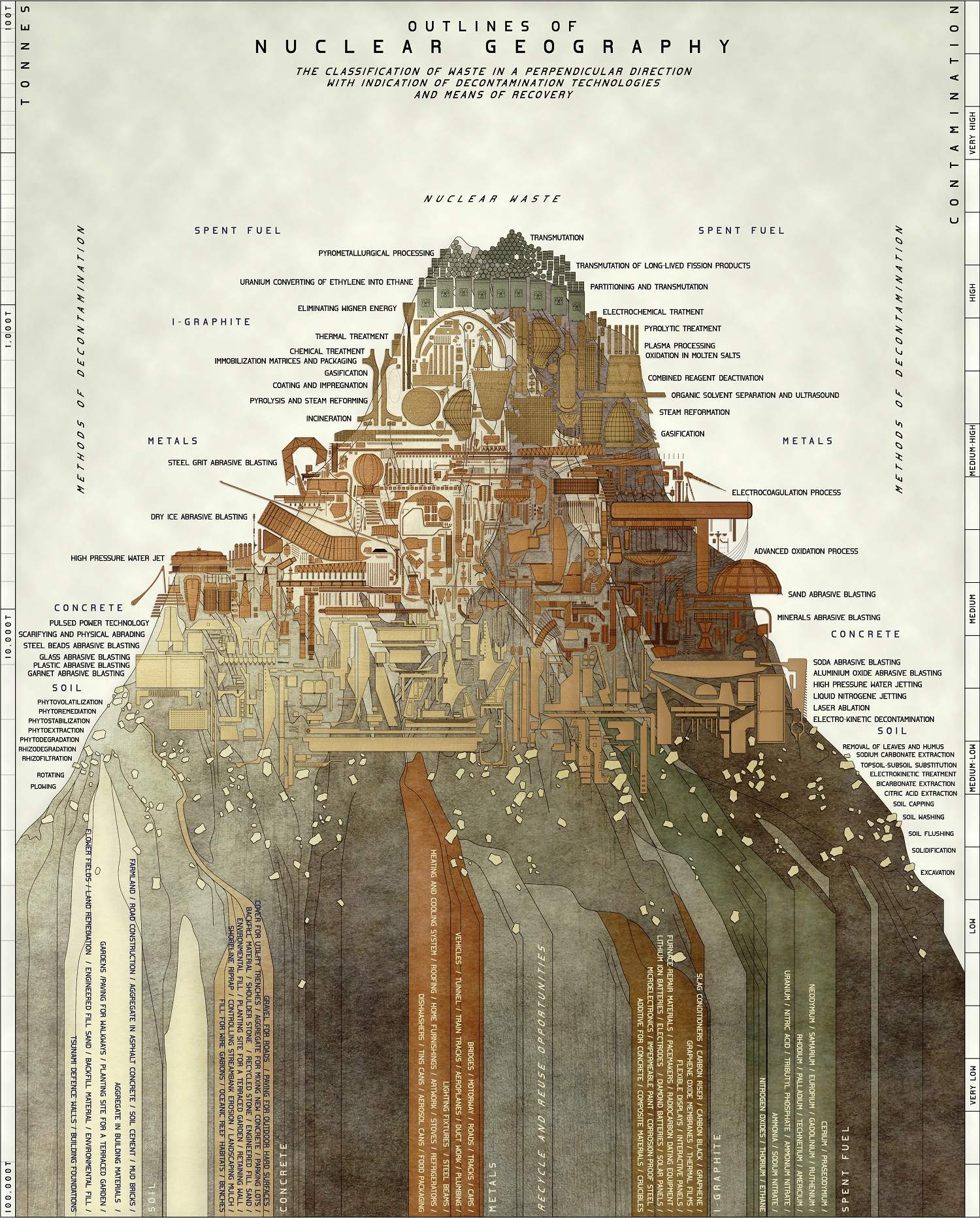 A finalist in the Digital category, Outlines of Nuclear Geography is an infographic presentation of nuclear waste materials, decontamination technologies and recycling techniques. The mountain illustration refers to the controversial practice of burying nuclear waste deep below the ground. The judges felt that this drawing succeeded in legibly presenting dense, complex information in an arresting image. 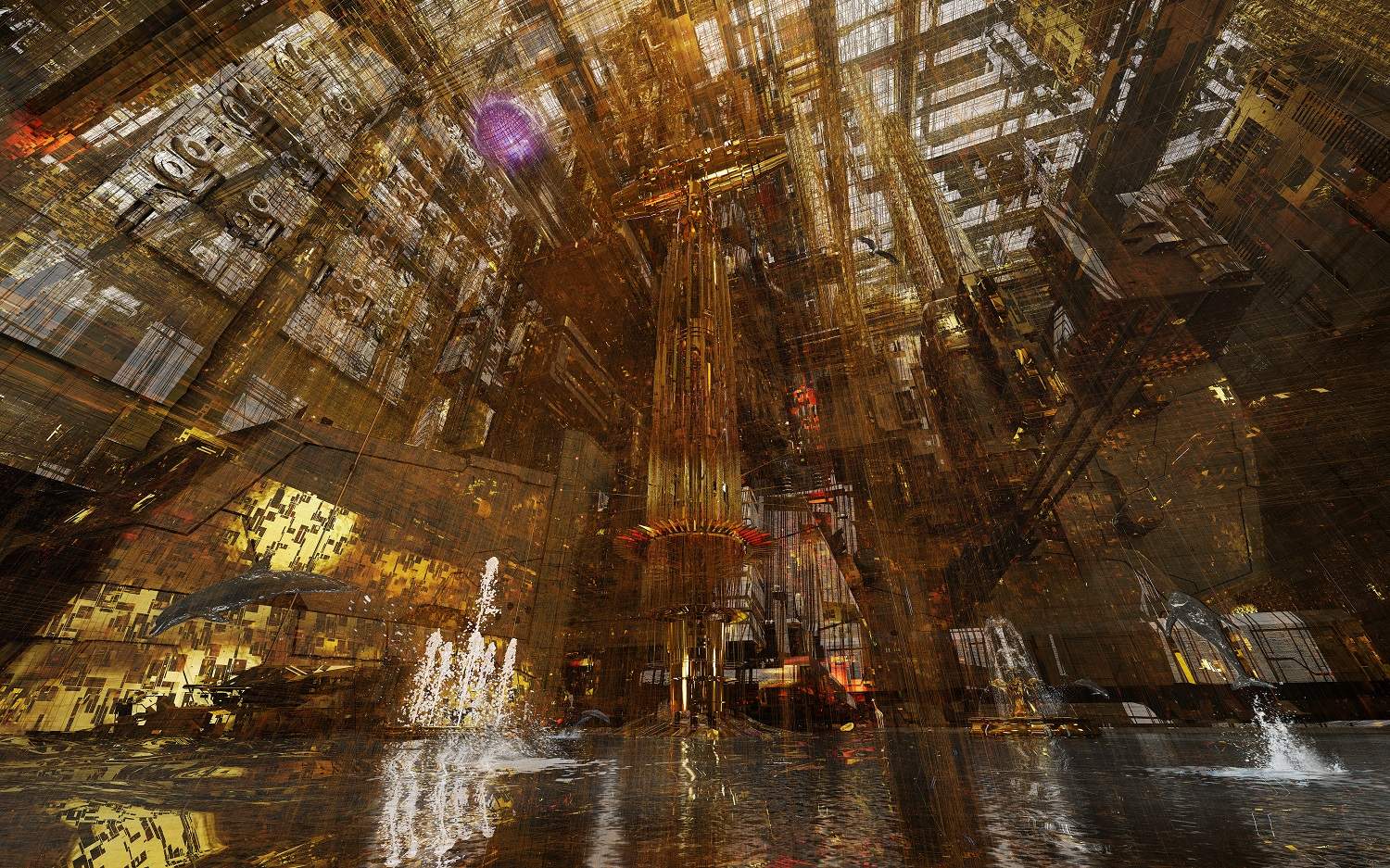 A finalist in the Digital category and a previous winner of The Architectural Drawing Prize, Pasing creates a convincing and seductive three-dimensional space. The variety of translucent, transparent and opaque surfaces and glittering reflections demonstrate the power of light as an architectural medium. 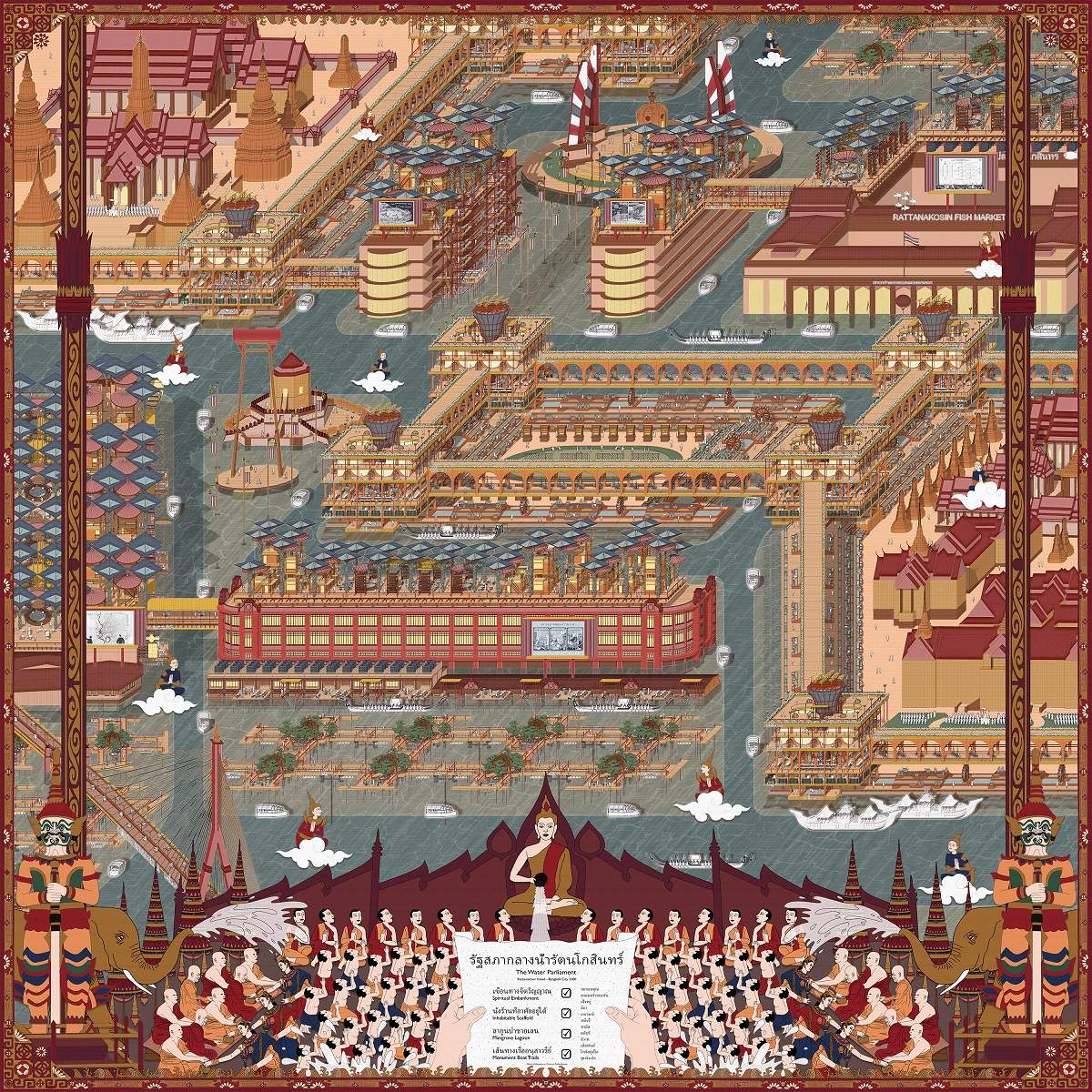 A finalist in the Digital category, Lim envisions a future where rising sea levels have been used as an opportunity to resurrect traditional Thai water culture in which water has deep religious symbolism as well as being a vital resource. His project explores the potential of using water as a key element in urban design which could also simultaneously improve the wellbeing of the city’s inhabitants. This is an image of a hi-tech future city that also embraces traditional and specifically Thai architectural motifs, retaining its unique character. 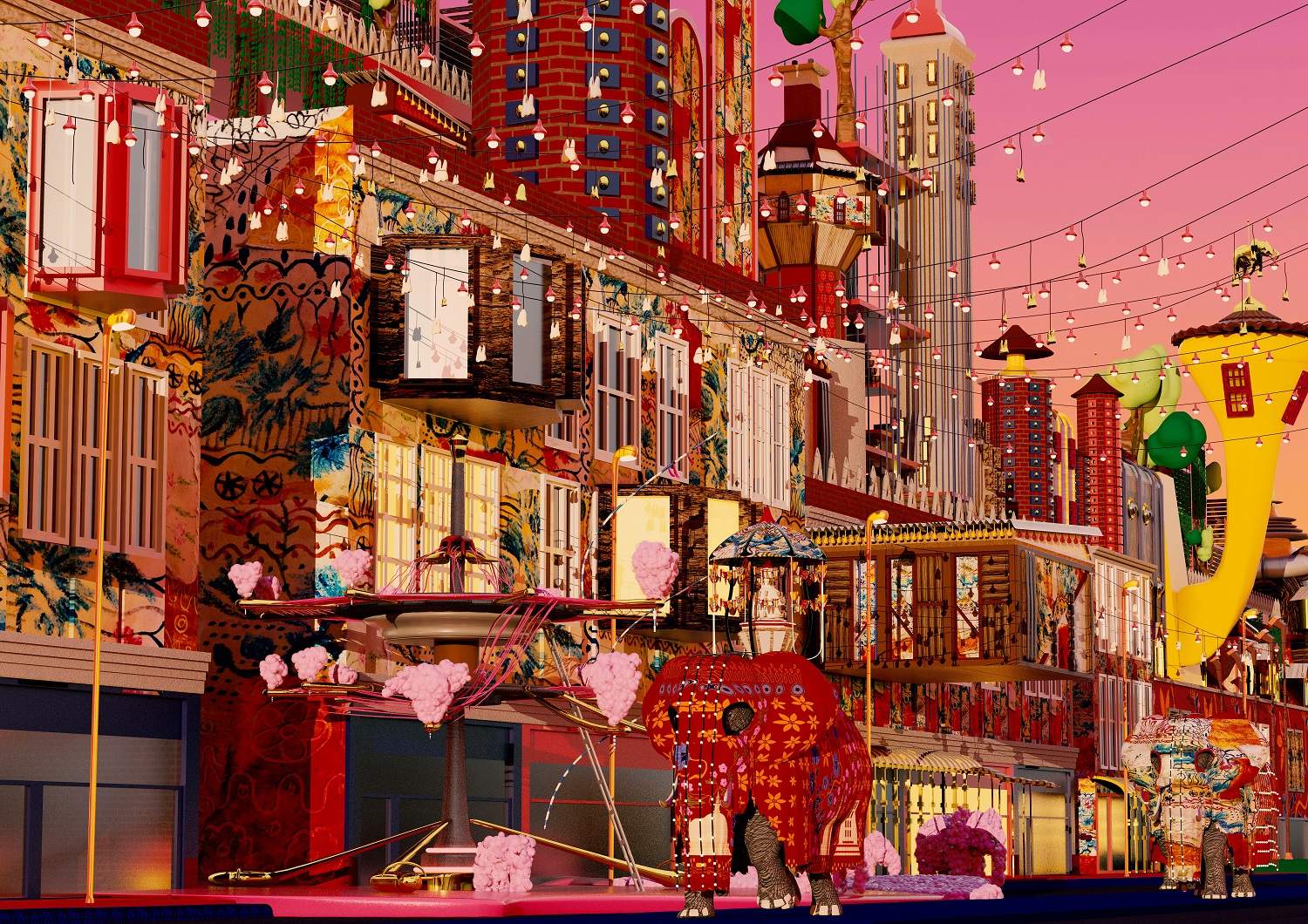 A finalist in the Digital category, this joyful drawing takes as its subject the Sri Lankan Buddhist community in Enfield, North London. It re-imagines the streetscape as decorated for the annual Esala Perahera festival which sees elephants parade through the streets of Kandy, Sri Lanka. Here, Sri Lankan and British motifs are combined in the patterns decorating the buildings; the cityscape reflects and celebrates cultural diversity. 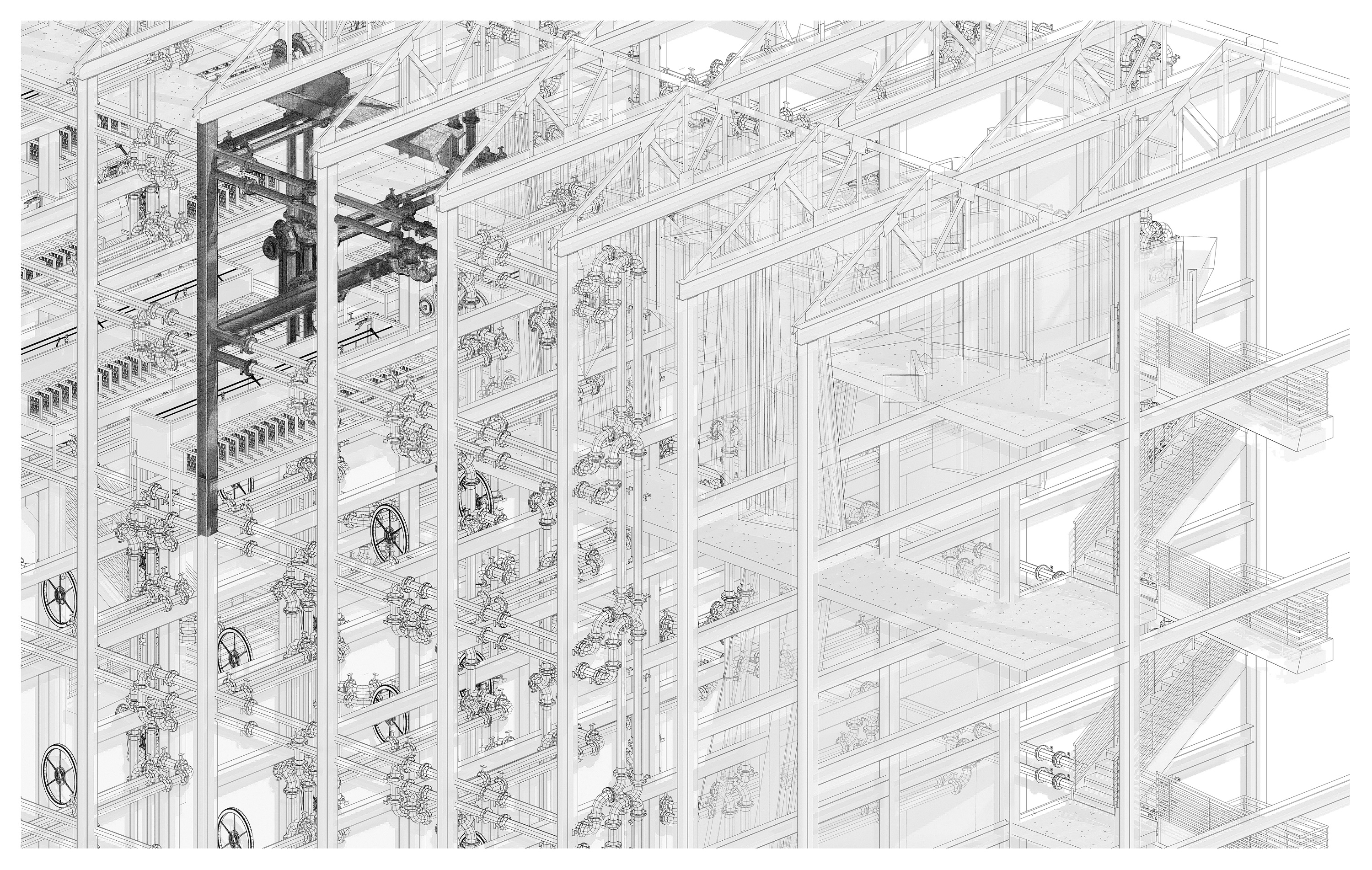 A 2020 finalist in the Digital category, this project suggests an alternative way of viewing Belfast’s ubiquitous linen mills. In the late nineteenth and early twentieth centuries, the north of Ireland was one of the most important linen producing areas in the world. Exploring the use of architectural drawing techniques to depict oral histories, Ingham aims to present unconventional and plural narratives, looking beyond the physical and the written history of a site. 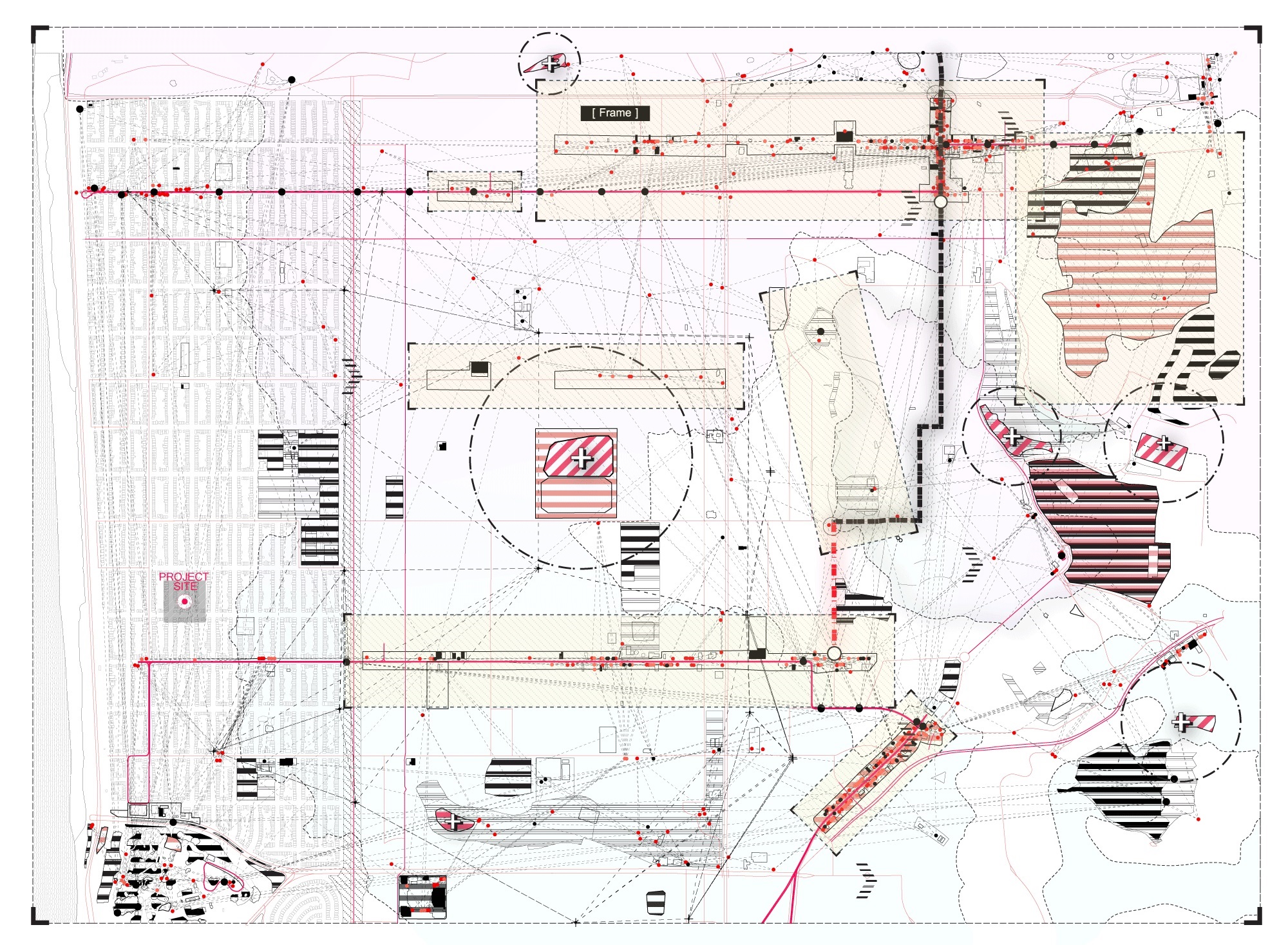 Winner of the Digital Category, 2020, this drawing presents a proposal for San Francisco’s Sunset District in the form of a site analysis. It aims to create connections between residential and commercial areas and is inspired by Francesco Borromini’s baroque Sant’Ivo alla Sapienza in Rome. Chenglin says how ‘there are many different layers in how the drawing was worked up,’ and it has a map-like quality, the hatched parts representing public spaces and the dots representing businesses. The judges were impressed by this image of a city that works both to convey information and as a beautiful object in its own right.

Winner of the Hand-drawn category, 2021, Paoletti’s drawing forms an element of a proposal for the redevelopment of districts in Addis Ababa where residents’ livelihoods are threatened by increasing urbanisation. He visited the districts, spoke to people and observed the ways they used architectural space. This drawing, which takes the form of a graphic novel, is part of this process of trying to understand an urban space and its inhabitants through the stories they tell.

Louise Stewart, Exhibitions Curator at the Sir John Soane’s Museum and Architecture Drawing Prize judge, describes the work as an impressive drawing which ‘uses an unusual format to place narrative and the impact of buildings on peoples’ lives at the heart of architectural drawing. This approach highlights the vibrancy of architectural drawing today, and the way it facilitates creativity and experimentation.’

Memories of the Last Tree, Olivia O’Callaghan, The Bartlett School of Architecture, UK, 2021

A finalist in the Hand-drawn category, this drawing depicts a future in which the last surviving tree on earth has been treated as a god, with humans constructing buildings in its image. The use of mirroring in the composition represents the tree looking at one of these buildings in its dying moments. The judges were impressed by the complexity of this drawing and the varied use of tone.

Winner of the Hand-drawn category, 2020, this drawing depicts the Japanese island of Hashima, commonly called Gunkanjima meaning Battleship Island, and is part of a series investigating urban expressions of utopia (urbatopia) from the ancient world to the future. A coal mining centre, Hashima was once known as the most densely populated city in the world, and was abandoned in 1974. Today, its buildings are slowly being reclaimed by nature, and the whole island has become a popular tourist attraction. Brousse refers to the drawing technique as ‘traitillism’, a mass of short vertical strokes with a second layer of invisible ink beneath, which when revealed under UV light, he says ‘represents the soul of the city’.

Joint Winner of the Hybrid category, 2021, Filippa’s project takes the climate emergency as its starting point, imagining a future London in which the Thames Barrier has been overwhelmed and flash floods are a regular occurrence. She proposes a solution which involves injecting hydro-membranes deep underground, protecting the infrastructure from flood waters. The image began with a photograph of a physical model which was then digitally manipulated. Ken Shuttleworth, Founder of Make Architects and judge, commented on how the jury ‘were all impressed by [the work] and the way it blurs the lines between physical objects and drawing with great skill and imagination, making it a truly exceptional example of a hybrid rendering.’ Joint Winner of the Hybrid category, 2021, this short film focuses on the instability and insecurity of ‘home’ for homeless people, instead of home as a permanent, private and secure space for most people. Hu uses drawing as an exploratory tool to try and understand their experiences and his proposal looks at ways in which disused urban interiors might house homeless people as well as refugees and those seeking asylum. Judge and architect Lily Jencks, says how (Un)homeliness is ‘a powerful story told with a moody suggestive pencil gesture. It was exciting to see the stills animated with sound to convey a strong atmospheric urban scene, accompanied by beautiful renders to give a sense of a full potential of hybrid architectural drawings.’

Apartment #5, a Labyrinth and Repository of Spatial Memories, Clement Laurencio​, The Bartlett School of Architecture, UK, 2020

The Overall Winner of 2020, this highly detailed drawing was created during the period of lockdown in March 2020. Due to not being able to travel, the artist was inspired by Le Corbusier buildings he had encountered while in India and attempted to recreate their atmosphere. Using a London-set building and combining 30 pencil drawings, which he scanned and digitally composed on a Rhino 3D base, the result is an impressive labyrinth-like structure of distinct, characterful and very convincing domestic spaces. The name comes from Laurencio’s idea that ‘an apartment is a vessel in which our memories cohabit’.

Winner of the Hybrid category, 2020, this project depicts a world ‘Autopia’, where a car-orientated urbanism has transformed the city and exacerbated the crisis of our civic sphere. The judges were impressed by the range of viewpoints, drawing styles and scenes combined in this appealing, almost monochromatic hybrid image.

Autodesk Sketchbook for the iPad Pro

Winner of the Lockdown Prize, 2020, this triptych was made during the Covid-19 pandemic. The architects have proposed a solution for the increased number of planes being grounded and scrapped due to Covid-19 restrictions on travel. They suggest repurposing these decommissioned aeroplanes into affordable housing for today’s cities. The images show a residential tower block made from multiple planes on top of each other, viewed from three angles. The judges felt that Aeroplane Tower was both ‘witty and serious’ and liked how the ‘tail fins with the airlines’ showy logos stacked up as a decorative element.’

Take a closer look at these extraordinary works. Visit Sir John Soane's Museum between Wednesday 19 January and Sun 20 February to explore the exhibition.

For more information about upcoming exhibitions and events at the Soane, visit our What's On page.