A Web of Interconnections: Soane’s Election as a Fellow of the Royal Society, 15 November 1821

200 years ago today John Soane recorded in his diary: ‘… All the day at Home/ Mr Chantry & Dr Somer[ville] called in the Even[in]g/Mr Moore with a letter/ from Mr C Hatchett.’ The letter from Charles Hatchett (Fig.1), which survives in Soane’s Archive, reads: ‘I have the pleasure to acquaint you that you have been elected this Evening a Fellow of the Royal Society, and at the Meeting of next Thursday I shall be happy to present you in order that you may be admitted in due form…’ Soane immediately began planning a celebratory dinner, but before describing that it is necessary to take a step back and examine the evidence for what had led up to this election. 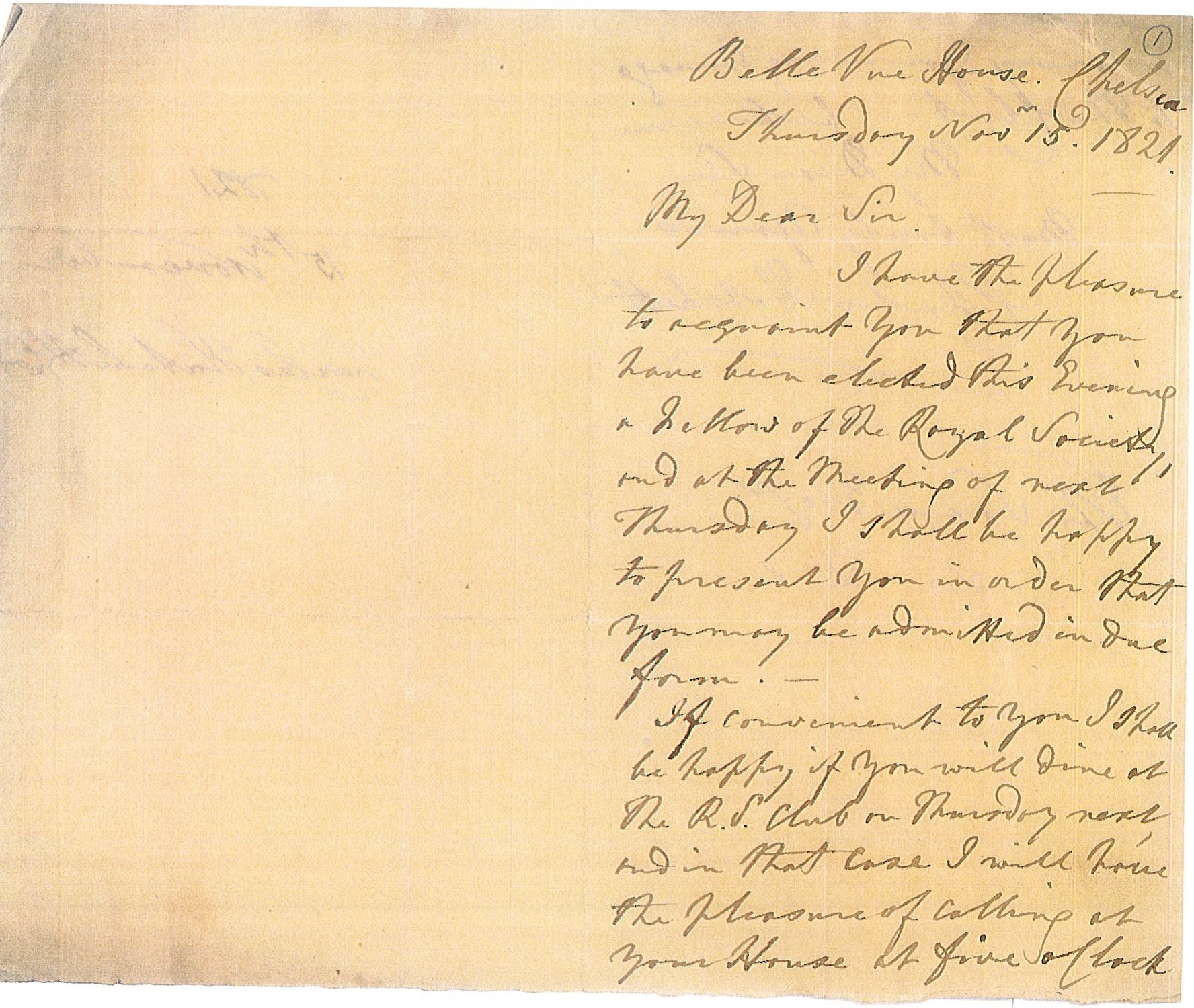 Fig. 1 Letter from Charles Hatchett to Soane 15 Nov 1821 informing him of his election as a Fellow of the Royal Society.

In his blog 'Sir John Soane’s Museum and Representative Trustees of the Royal Society', also published today, Jonathan Ashmore describes how ‘during the previous decades and into the 1820s, the [Royal] Society had become more of a club for aristocratic and wealthy Fellows, whose scientific connections were relatively minimal instead of any contributions they might make to natural knowledge’, and goes on to say that the Royal Society records reveal that Soane registered his interest as ‘antiquarianism’.

Clues can be found in the list of Fellows who had sponsored Soane’s election and also in the list of invitees to his celebratory dinner and point to a circle partially centred on the Royal Hospital, Chelsea, where Soane had been Clerk of Works since 1807 and where after his wife Eliza’s premature death in November 1815 he increasingly chose to spend time in his official house.

The 2nd Earl Spencer (1758-1834) was First Lord of the Admiralty and a long-established and faithful client of Henry Holland’s, in whose office Soane had trained as an architect. Having lost the surveyorship of the East India Company to Holland in 1799 Soane published a printed Letter to the Earl Spencer concerning the competition. Soane’s connection to Auriol was probably also through the East India Company, of which he had been a proprietor, or shareholder, since 1795, as Auriol (fl. 1808) had been Secretary to the Government of Warren Hastings.

Another trio would have known Soane through the Society of Antiquaries, of which Soane had been elected a Fellow in 1796 – Daniel Moore (c.1760-1828), a barrister of Lincoln’s Inn (the deliverer of the letter announcing Soane’s election), Robert Nixon (1759-1837) and John Thomas Mayne (fl.1818).

Soane had crossed paths with John Rennie (1761-1821), the civil engineer, professionally on a number of occasions. Rennie sadly died on the 4 October 1821 before he could see his candidate successfully elected.

Thomas Phillips RA (1770-1845) the portrait painter was well known to Soane through the Royal Academy, where Soane had been Professor of Architecture since 1806. Phillips had been elected a Fellow of the Royal Society in 1818 and his sponsors had included Earl Spencer, Charles Hatchett, Humphry Davy, Daniel Moore and Everard Home (see below).

William Somerville (1771-1860) was Physician at the Royal Hospital, Chelsea from 1819 and he and his wife Mary (1780-1872), the celebrated mathematician and astronomer, soon became firm friends with Soane, dining together frequently. William Somerville had been elected a Fellow of the Royal Society in 1817, Sir Humphry Davy being one of his sponsors. It seems very likely that it was  Somerville who introduced Soane to Charles Hatchett (1765-1847). Charles Hatchett (Fig 2) was a Chemist who had been a Fellow of the Royal Society since 1797. 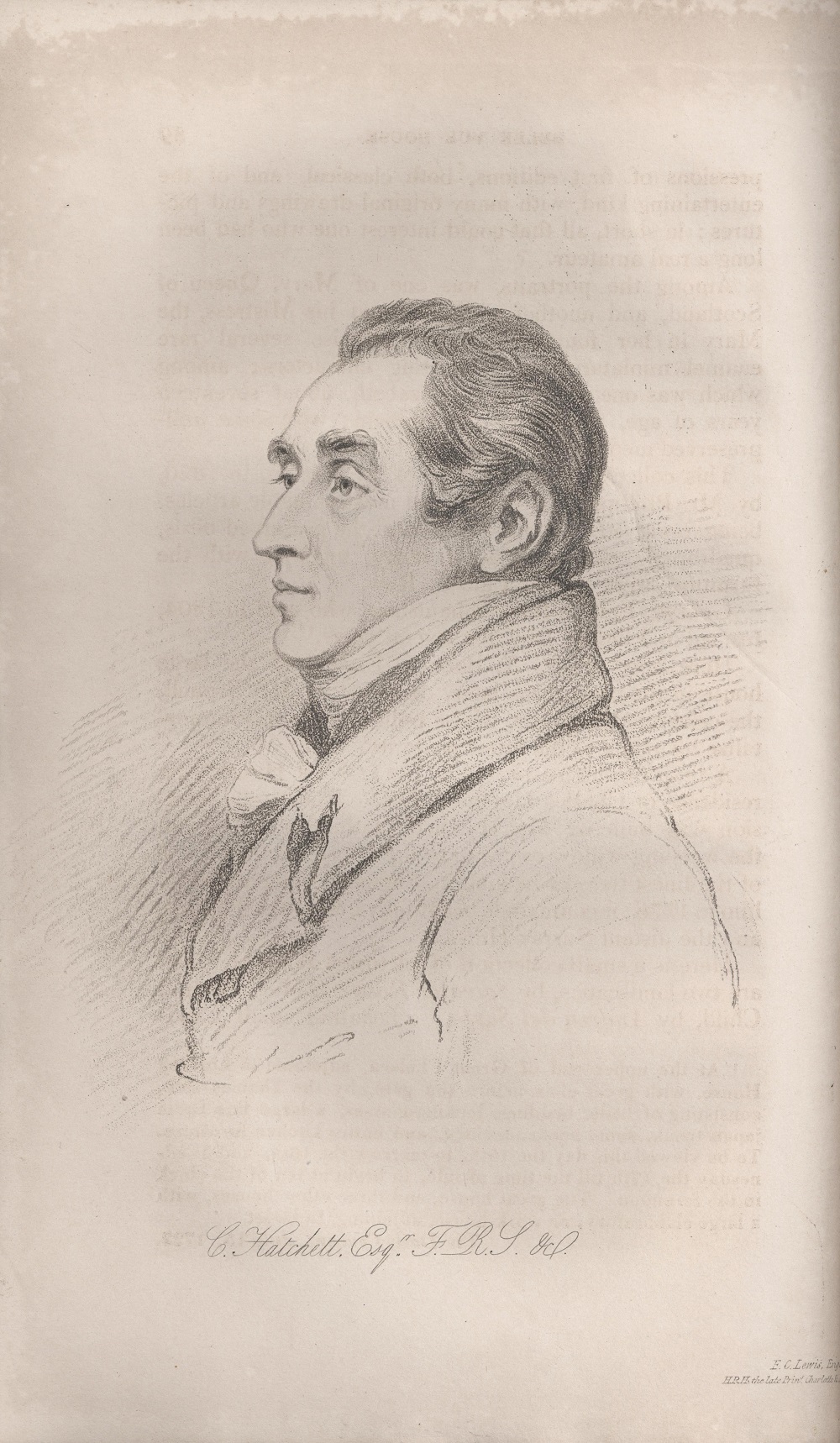 Fig. 2 Portrait of Charles Hatchett engraved by F.C. Lewis after a painting by Thomas Phillips.

However, he had wide interests apart from science – he was a good organist and owned a large collection of rare books, musical scores, pictures and curios. In 1810 he had moved to Bellevue House, Chelsea, built by his father in 1771 (where his collections are described in some detail by Thomas Faulkner in the 1829 edition of his History of Chelsea (Vol 1, pp.88-91). Hatchett was precisely the sort of man, with his wide-ranging interests and collections, who would have appealed to Soane and it is clear from Soane’s diary that they socialised often from this point, the last recorded communication in Soane’s Archive being a copy of a letter sent from Soane to Hatchett on 19 May 1836, thanking him for a copy of his pamphlet The Spikenard of the Ancients and hoping to be well enough to call on him soon to thank him in person.

To Soane’s sponsors in this web of connections can be added the guests at the dinner he organised to celebrate his election. On 16 November 1821 he recorded in his diary: ‘Wrote inv[itation]s to Sir E Home/ Mr and Mrs Chantry/ Mr and Mrs Philipps/ Mr Hatchett/Mr B[ran]d/ Sir Samuel and Lady Hulse’. In the event the guests present at the dinner on 24 November 1821 were: ‘3 Chantrey/ 2 Brand/ 3 Neaves/ 1 Sir Ev[erard]/ 2 Somerville/Hatchett/ Moore/C [      ]/Taylor’.

Of those whom we have not already met, Sir Everard Home (1756-1832) was an eminent surgeon who was appointed Surgeon to the Royal Hospital, Chelsea in 1821. He had been elected a Fellow of the Royal Society in 1787. There are frequent references in Soane’s diary to calling on him at Chelsea from September 1821, and subsequently to dining with him on numerous occasions, both at Chelsea and at the [Royal] College of Surgeons in Lincoln’s Inn Fields. Home even performed some sort of surgical procedure on Soane on 17 and 24 July 1822, on the second occasion Soane recording in his diary ‘much pain and more blood’.

Mr and Mrs Chantry refers to Francis Legatt Chantrey (1781-1841) and his wife. Chantrey was a sculptor well-known to Soane through the Royal Academy. They socialised frequently and Chantrey’s 1829 bust of Soane presides over the Dome Area of Sir John Soane’s Museum (Fig 3). Chantrey had been elected a Fellow of the Royal Society in 1818, his sponsors including Humphry Davy and John Rennie. Clearly the visit to Soane with Dr Somerville on the evening of 15 November, referred to above, had been to congratulate him on his election as FRS, shortly thereafter announced in the letter from Charles Hatchett. 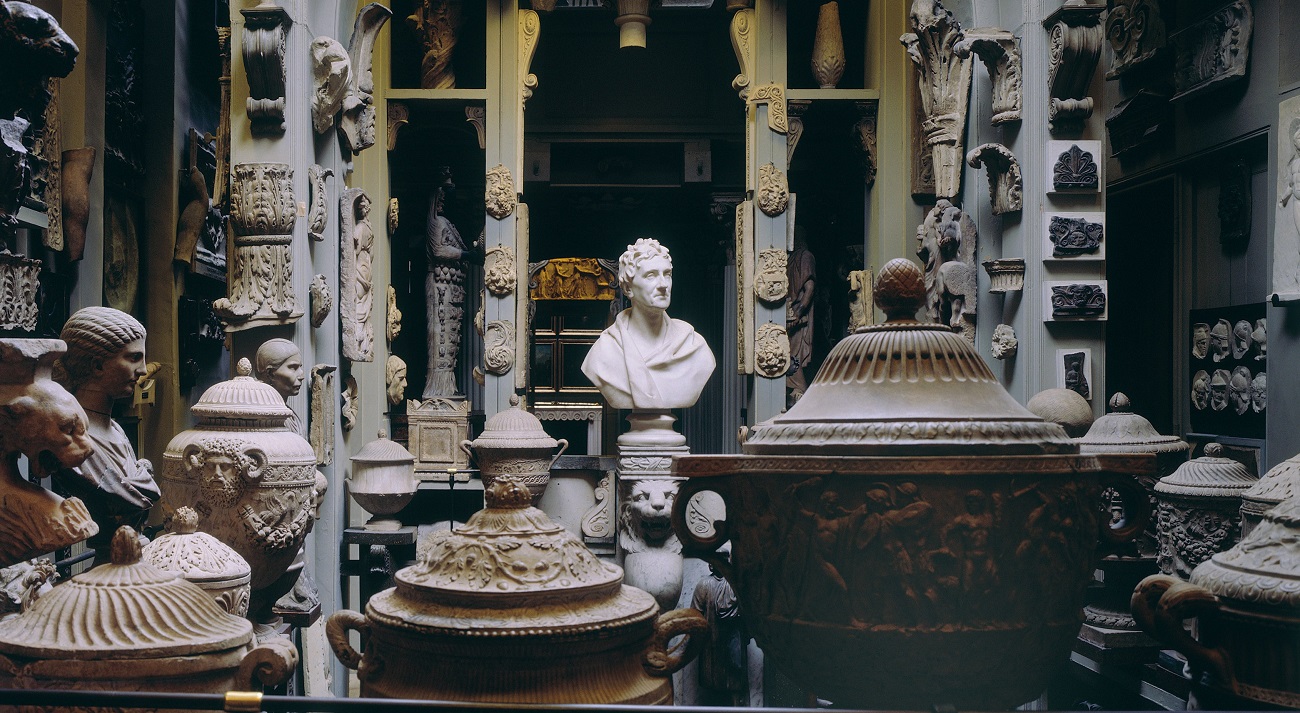 Sir Samuel Hulse (1746-1837), Governor of the Royal Hospital, Chelsea, was evidently prevented by a prior engagement from accepting Soane’s invitation, but was replaced by the Secretary to the hospital, Richard Neave (1773-1858).

On 5 December 1821 Soane proudly recorded in his diary: ‘… Dine at the Royal Society/Dinner and afterwards attend the meeting/… Royal Society P[ai]d Fees £32.11.0/ dinner & Ser[?vants] £0.9.0’. There are similar entries in subsequent years, sometimes also recording attending a meeting at the Society of Antiquaries on the same day. The two societies were quartered next to each other in Somerset House and Sir Joseph Banks, President of the Royal Society until his death on 30 November 1820, had shortened meetings to an hour and moved them to 8.00 pm. This allowed members to dine together at a fashionable hour, typically at the Crown and Anchor tavern off the Strand, and to permit members who were Fellows of both the Royal Society and the Society of Antiquaries to attend meetings of both bodies on the same day.

On 12 December 1821 and on several subsequent occasions in 1822 and 1823 Soane recorded attending ‘Sir H. Davy Conversazione’. Sir Humphry Davy had succeeded Banks as President of the Royal Society and carried on the Conversazioni established by him. They were apparently a useful way to introduce someone who wished to be considered a candidate for the Fellowship, and it is interesting to note that Soane took two people with him on his first visit though nothing more seems to have come of that.

References in Soane’s diary to attending Royal Society meetings and dinners tail off after 1823, but it is possible that he stopped recording his attendances once the novelty wore off. Whatever the case, he continued to socialise with his Royal Society friends Sir Francis Chantrey, Sir Everard Hume, Charles Hatchett and William Somerville and Royal Society meetings and business no doubt formed part of their conversations. Soane must have taken particular pleasure that Mary Somerville’s paper ‘On the magnetising power of the more refrangible solar rays’ was read to the Royal Society by her husband in February 1826: women were barred from taking part in meetings, though the paper was subsequently published under her own name in the Philosophical Transactions. He will have been delighted too that in 1832 62 Fellows of the Royal Society commissioned a bust of Mary Somerville from Sir Francis Chantrey to mark the publication in 1831 of her book The Mechanism of the Heavens (Figs 4 & 5). 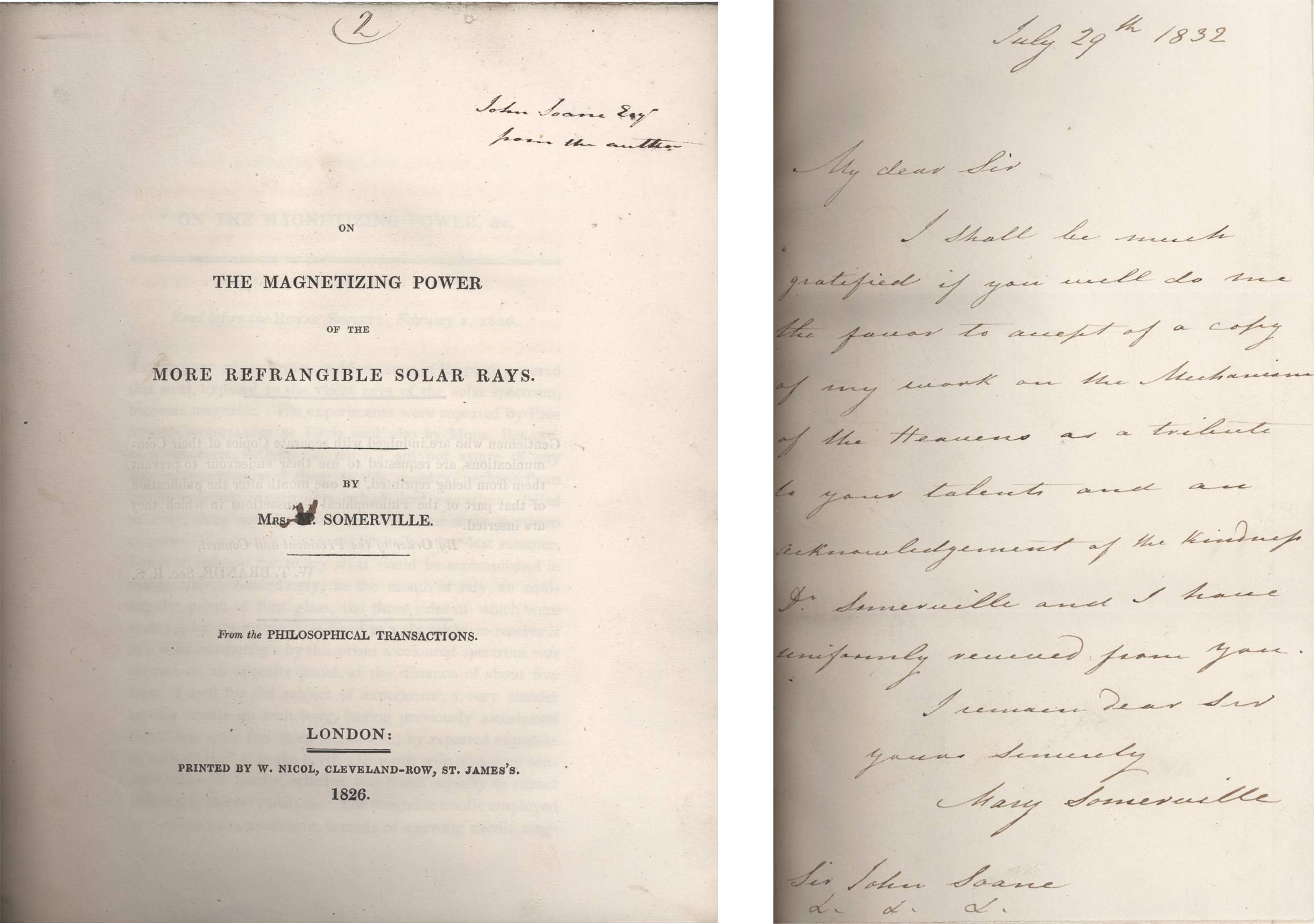 He continued as a Fellow until his death on 20 January 1837, and, as Jonathan Ashmore has pointed out, included the Royal Society as one of the bodies to provide a representative Trustee for his Museum after his death, alongside the Court of Aldermen of the City of London, the Royal Academy, the Society of Antiquaries and the [Royal] Society of Arts. He would have been particularly gratified that his eulogy at the Royal Society was given by the then President, His Royal Highness Prince Augustus Frederick, Duke of Sussex.

Read more about the lasting relationship between the Museum and the Royal Society in our guest blog by our Trustee, Jonathan Ashmore.