by Frances Sands, Curator of Drawings and Books

Following a Grand Tour of 1794-97, the extraordinarily skilled artist, architect and draughtsman Joseph Michael Gandy (1771-1843) returned to London at a time of economic instability. With the French Revolutionary Wars ongoing, the economic climate in Britain was one of hesitancy. It would have been near impossible for Gandy to establish himself in private practice either as an artist or an architect, particularly as he was from a humble background – one of twelve children of a waiter – and required an income. It was necessary for Gandy to take employment as a draughtsman within the architectural office of Sir John Soane. Although this position was short-lived, and Gandy established his independent practice in 1801, he remained impecunious throughout his life, and was dependent on freelance employment from Soane until the latter’s death in 1837. Between 1800 and 1838, Gandy’s private practice produced few architectural works, and he focused principally on painted architectural fantasies, reminiscent of the work of Giovanni Batista Piranesi, and these were exhibited almost annually at the Royal Academy.

Gandy’s unparalleled skill as an architectural draughtsman must have been immediately evident to Soane. Even when he was employed as an office draughtsman in 1798-1801, his time was generally preserved for the production of lavish presentation and exhibition drawings, rather than the more work-a-day activities of other draughtsmen who churned out reams of drawings: scaled versions of Soane’s design drawings, office record copies and working drawings for the instruction of builders and craftsmen. Very shortly after his arrival in the office, Soane dispatched Gandy to Tyringham Hall in Buckinghamshire. This was Soane’s largest country house project, which he designed from 1797. Moreover, it was one of Soane’s happiest projects, doubtless as his client, a banker, William Praed, gave him considerable free rein over the design. Upon Soane’s completion of Tyringham, Gandy spent nine days there from 27 July to 7 August 1798 in order to make a series of exquisite presentation and exhibition drawings for Soane to record and commemorate his work. Once Gandy was an independent practitioner and working for Soane in a freelance capacity, he was still called upon when the most magnificent drawings were required, for example the production of elaborate, large-scale watercolour drawings – usually perspective views, albeit often in composite form – illustrating Soane’s architecture for exhibition at the Royal Academy or within Sir John Soane’s Museum. However, from these later, freelance years, there are also a great number of smaller watercolour sketches and studies by Gandy illustrating Soane’s work, for example at the Bank of England, the Law Courts attached to the House of Lords, and Soane’s home and collection. 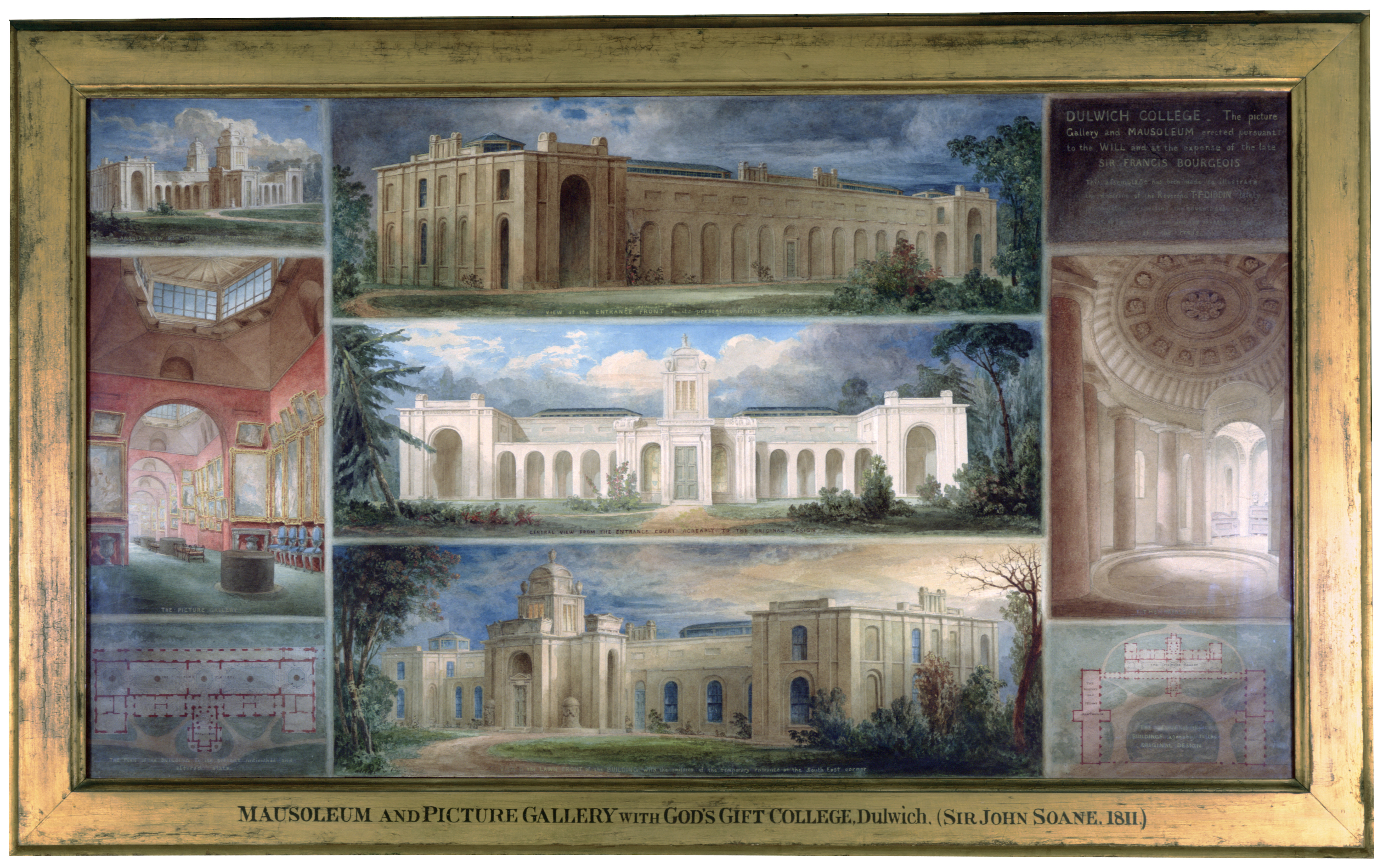 Soane had very good reason to favour Gandy above all draughtsmen. Romantic in their style, and yet crisply eloquent in their architectural and ornamental details, Gandy’s watercolour drawings were unparalleled in quality by any of his contemporaries. It is recorded in Joseph Farrington’s diary that the neo-classical architect Joseph Bonomi hailed Gandy ‘the best draughtsman in England’. Moreover, on 8 May 1819 one critic writing in The Literary Gazette explained that at the RA annual exhibition, Gandy’s work made other architectural drawings ‘look like dirty washing’. It was via the means of Gandy’s skill that Soane was able to illustrate his most exceptional architectural compositions to best effect. Gandy had an uncanny ability to accurately depict the spatial intricacies and dramatic lighting effects of Soane’s designs. Irrespective of Soane’s architecture being limited by budget, plot size, or simply a client’s deviations in taste, Gandy’s exquisite drawings could display Soane’s designs in an idealised form, devoid of worldly constrains, and even ignoring the basic facts of whether a design had been executed. 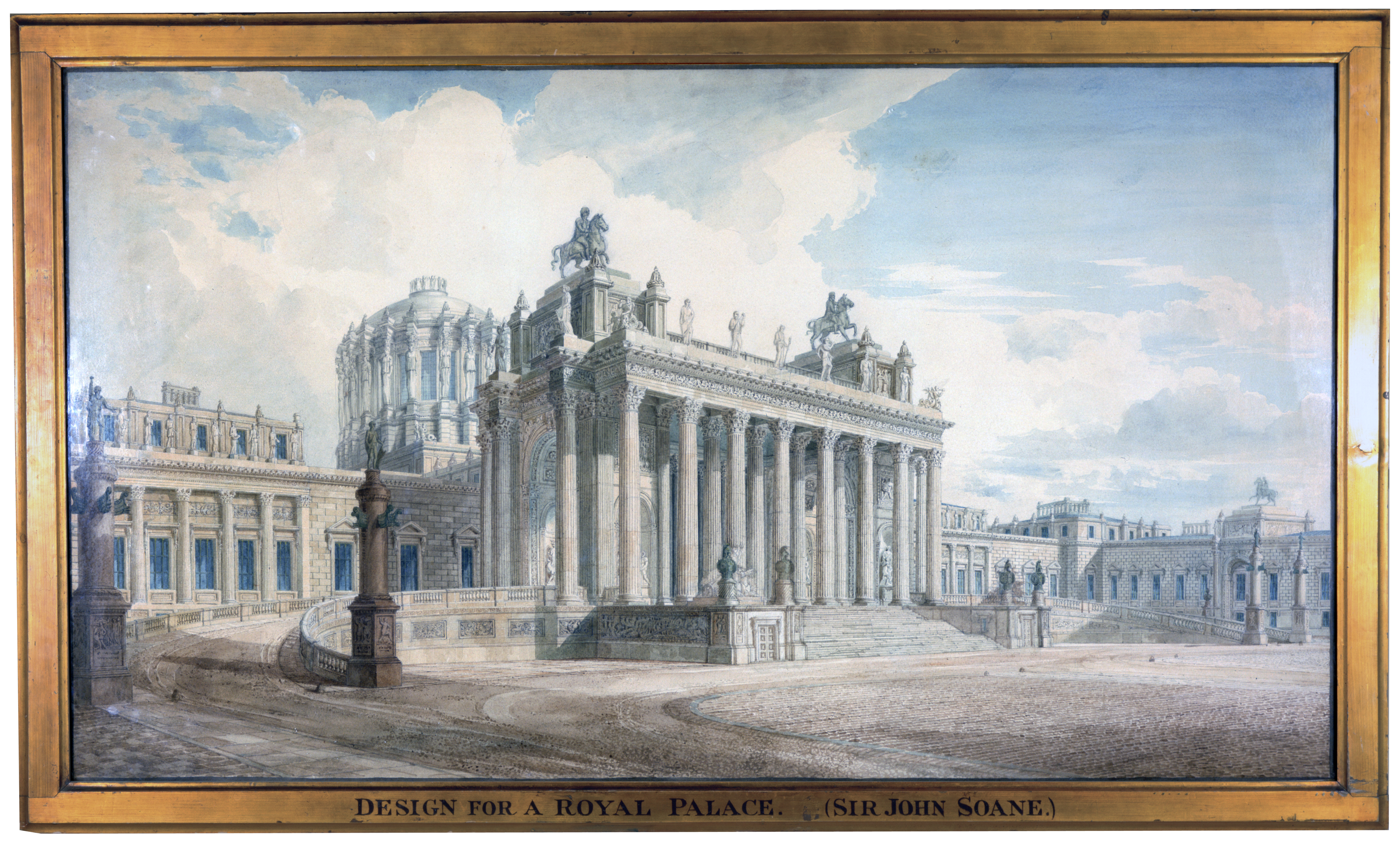 Joseph Michael Gandy, perspective of the portico for an unexecuted Royal Palace, 1821, exhibited at the RA 1827, SM P260.

Much of Soane’s characteristically pared-down style was well established by the time Gandy arrived in his office in 1798, but Brian Lukacher has noted the radiance of Gandy’s drawings and the fact that ‘it is extremely difficult to judge the degree to which Gandy’s visualising skills had a determining influence on Soane’s experimental approach to spatial form and his unique conflation of Greek and Gothic idioms of architecture’. It must not go unnoticed that Soane specifically chose Gandy’s drawings, as opposed to anyone else’s, as the method by which his architectural achievements would be communicated on a public stage. In Gandy, it seems Soane had found his perfect counterpart, particularly as Soane grew older and his eyesight began to fail, and in Soane, Gandy had found a wealthy patron who could be relied upon to provide regular employment. In the words of Sir John Summerson:

One thinks of Soane and Gandy as inseparable. Without Soane, Gandy would have starved; without Gandy, Soane, who was no great draughtsman, would have been at a loss how to give his designs the haunting ambience which makes them live.