An introduction to Charles-Louis Clérisseau on his 300th birthday

by Frances Sands, Curator of Drawings and Books

Born in Paris and educated there in draughtsmanship and architectural design under Germain Boffrand, at the age of 25 Clérisseau won the premier architectural prize in France, the Prix de Rome, with a design for Un grand hôtel. Clérisseau’s reward was a scholarship at the French Academy in Rome, at which he became a pensionnaire in 1749, and where he received instruction in drawing and painting from Giovanni Paolo Pannini. Moreover, during his time in Rome, he formed significant friendships with Giovanni Battista Piranesi and Claude-Joseph Vernet.

Clérisseau remained in Rome for eighteen years, becoming an authority on antique Roman architecture, undertaking his own works, including his famous ruin room at the Trinita dei Monti convent, as well as teaching and acting as an artistic cicerone for other visitors. These visitors comprised a series of winners of the Prix de Rome, as well as French and British Grand Tourists, including some of the leading contemporary exponents of British neoclassicism, such as William Chambers and Robert and James Adam. 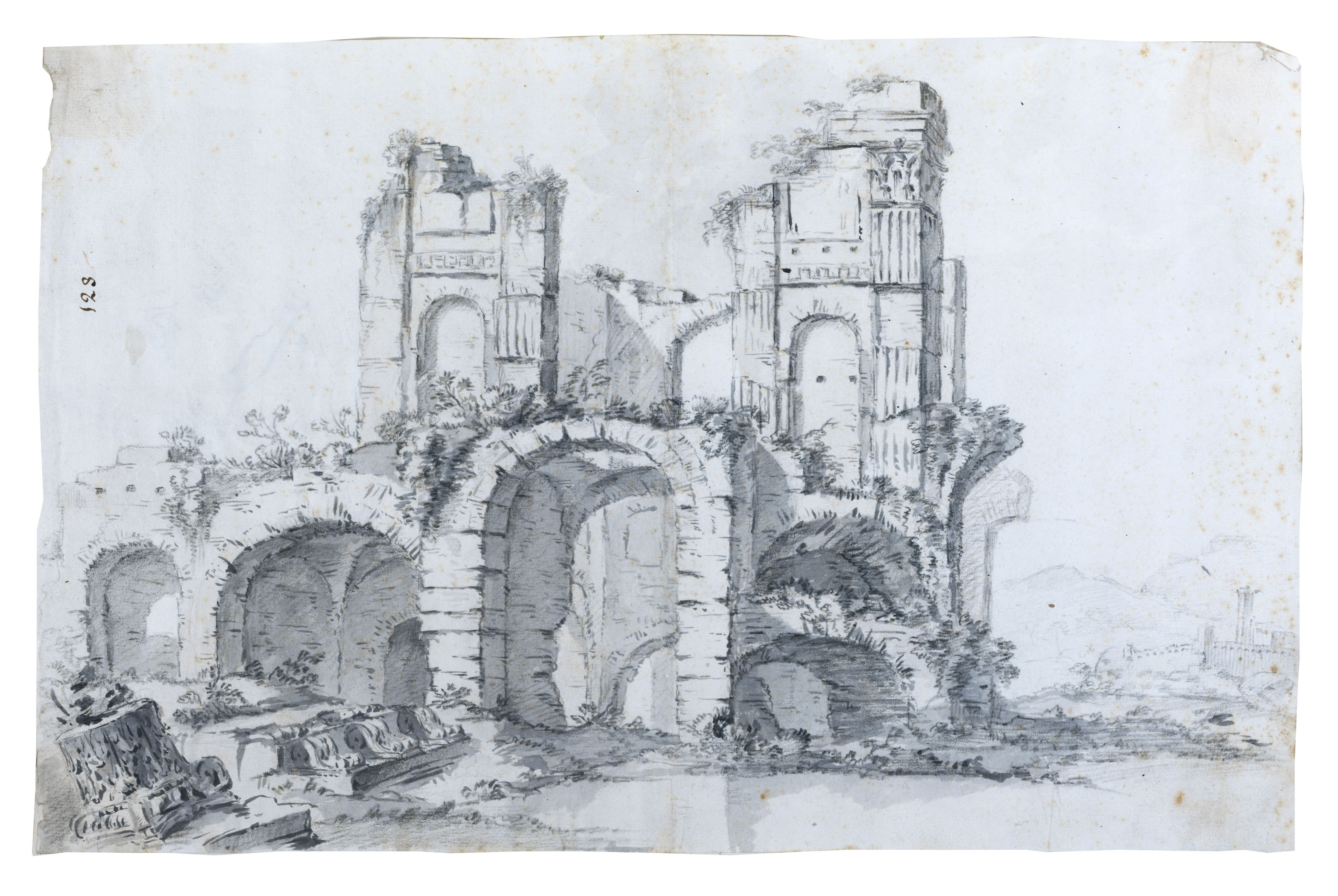 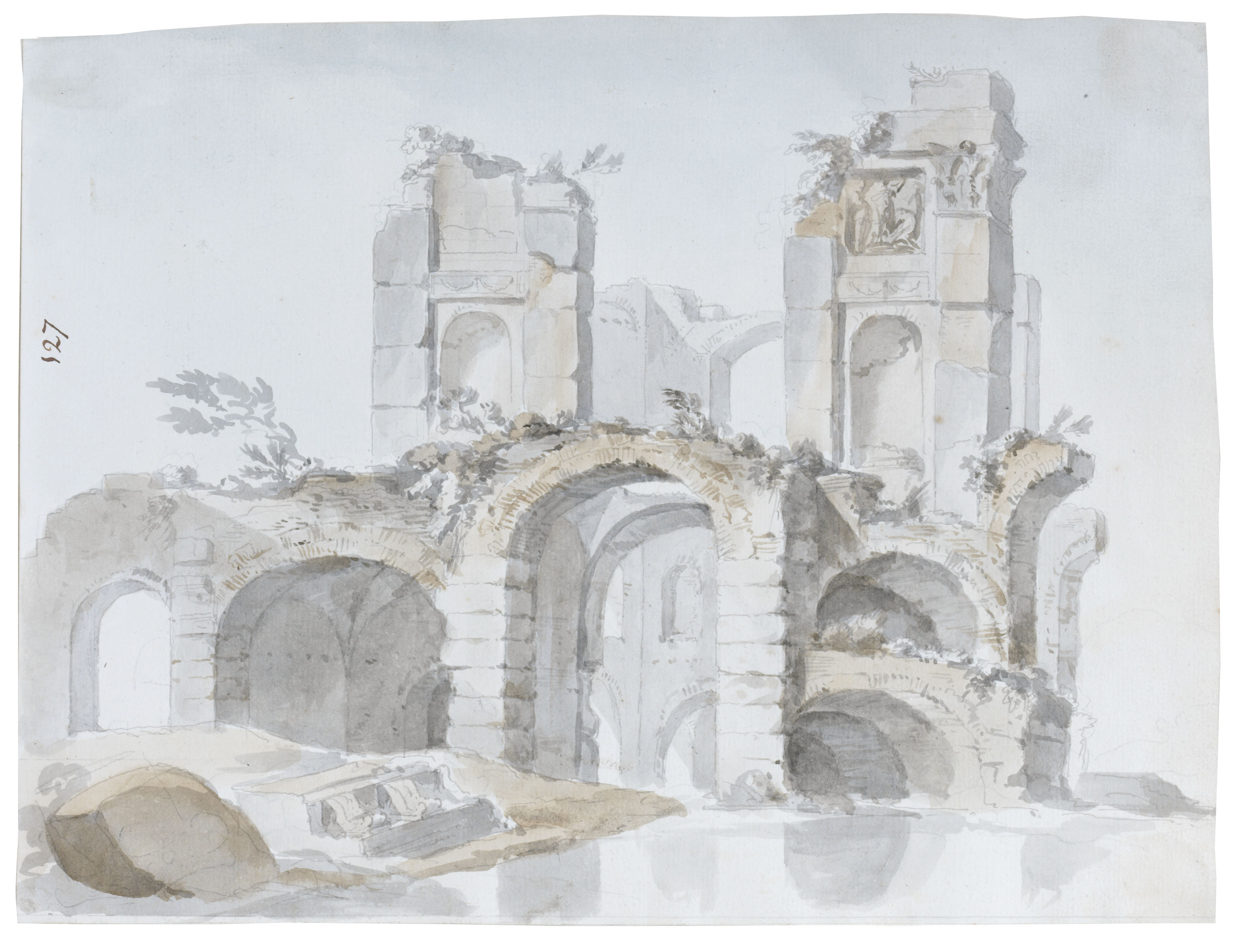 For a time in the 1750s Clérisseau and Robert Adam lived together at the Casa Guarnieri, near the Spanish Steps in Rome. It was here that Adam truly learned from Clérisseau to draw like a master architect. Adam’s letters attest to the fact that Clérisseau discouraged him from attempting architectural design until he was more fully conversant with the various ornamental motifs available to him, and was able to draw them with skill. Clérisseau’s teaching style evidently involved his pupil emulating his own work, and there are a number of examples of pairs of drawings of the same subject by Clérisseau and Adam, working side by side.

Clérisseau and Adam’s drawings from that time are principally in pencil, pen and watercolour, depicting either fictional capricci and ruinscapes, or recording architecture, fragments and ornamental motifs from the buildings they encountered throughout Italy. The latter appear to have generally been drawn in situ, displaying an intimate understanding of the antique architecture that they illustrated, albeit often employing Clérisseau’s well-documented distortions of perspective to show a piece of architecture to its best advantage. The drawings utilise Clérisseau’s characteristic mode of depicting architecture in solid lines of ink, but complement this with hazy watercolour backgrounds and topographies. 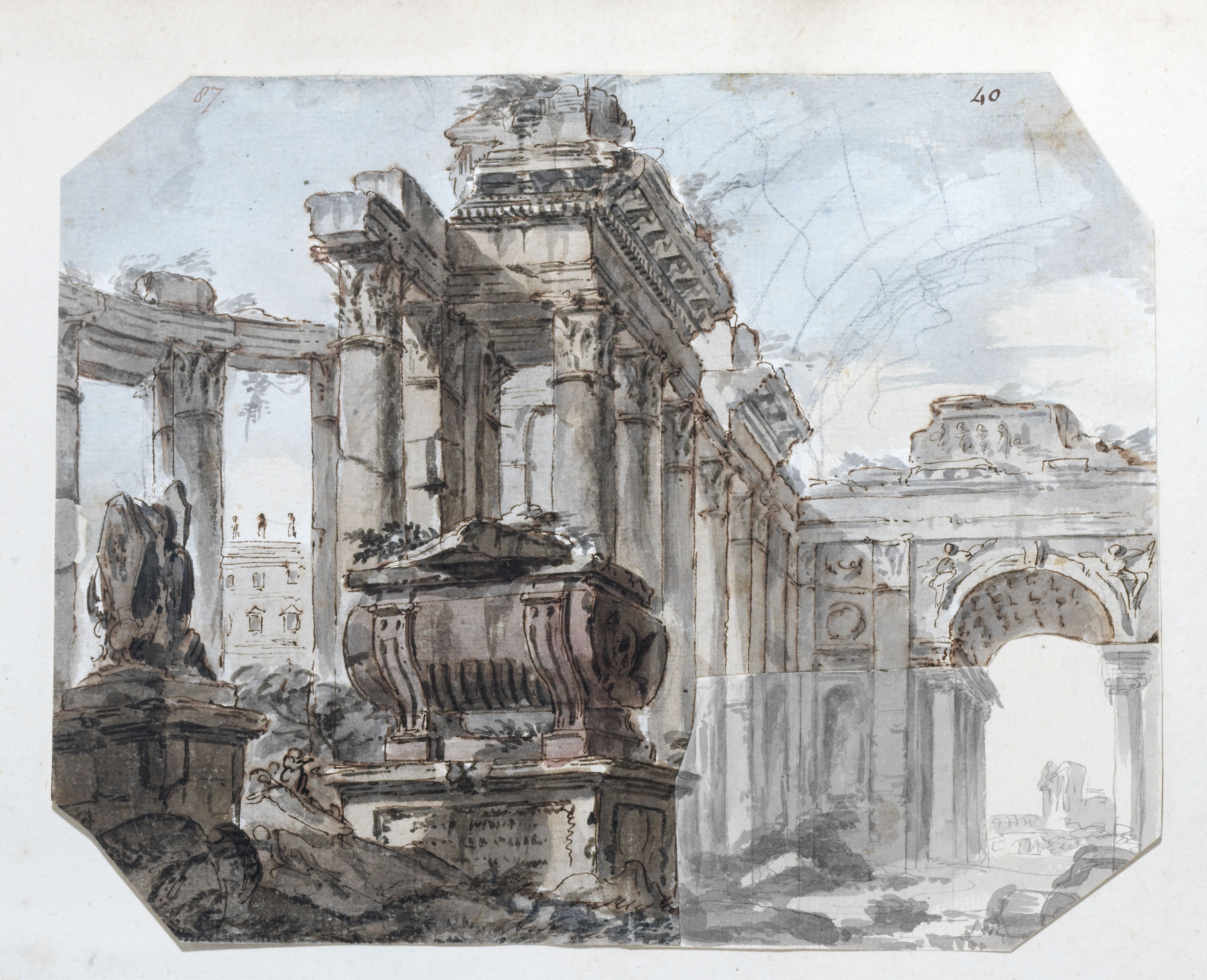 Attributed to Charles-Louis Clérisseau, capriccio of architectural ruins with a sarcophagus in the foreground, 1756-57, SM Adam volume 56/87.

In 1757 Clérisseau even accompanied Robert Adam to Spalatro, Dalmatia (now Split, Croatia) for five weeks in order to survey the ruins of the Palace of the Roman Emperor Diocletian for publication. Following Robert’s departure from Italy, Clérisseau supervised the production of the engravings for his publication, Ruins of the Palace of the Emperor Diocletian at Spalatro… (1764). Moreover, many of the expedition drawings finally selected for engraving are thought to have been by Clérisseau himself rather than Adam or the other accompanying draughtsmen. However, he received no credit for this in Adam’s book.

Following his return to Paris in 1767, Clérisseau attracted an international clientele. These included Catherine the Great, Empress of Russia, who in 1773 commissioned designs for a house for the park at Tsarskoye Selo, and in 1780 a triumphal bridge. Neither project was executed, but Clérisseau’s work was much admired in Russia and he was given the title Premier Architecte de Sa Majestée Impériale and made an honorary member of the Imperial Academy of Arts. 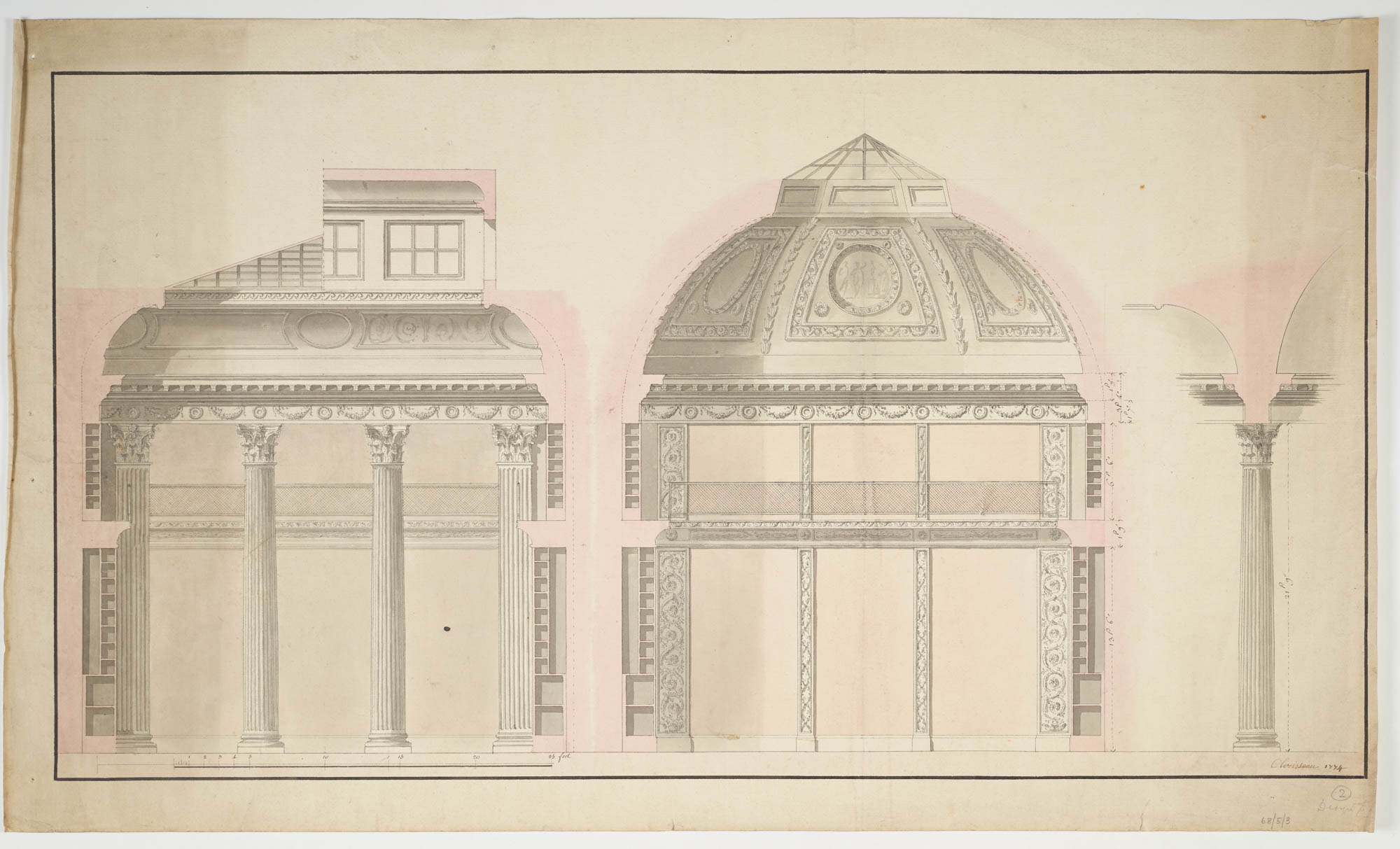 Charles-Louis Clérisseau, section showing a design of a library for Lansdowne House, 1774, SM 68/5/3.

In 1774, the 1st Marquis of Lansdowne commissioned Clérisseau to make designs for a library for Lansdowne House on Berkeley Square, London, but this was not executed. Then in 1785, Clérisseau was approached by Thomas Jefferson, then the United States Minister to France, to design the Virginia State Capitol, although in reality the Virginia State Capitol as built is thought to owe more to Jefferson himself than to Clérisseau.

Among his countrymen in Paris, Clérisseau found further success. He attracted a circle of fellow neoclassical architects, for example François-Joseph Bélanger, who had not had the opportunity to travel to Rome. One important commission, in 1775, was the interiors for the Hôtel Grimod de La Reynière in what is now the Place de la Concorde. His work there with Étienne de La Vallée comprises the first decorative scheme which was inspired by the archaeological discoveries at Pompeii and Herculaneum.

Although his own architectural output was reasonably limited, it is generally agreed that through his teaching and influence, Clérisseau became one of the most important exponents of eighteenth-century neoclassicism.

Clérisseau’s works on paper were generally produced in pencil, pen, chalk, watercolour and gouache. By far the largest cache of Clérisseau’s surviving works – over 1,000 drawings – can be found at the State Hermitage Museum, St Petersburg. However, his drawings can also be found in other collections including Sir John Soane’s Museum; Musée du Louvre, Paris; the Victoria and Albert Museum, London; the Royal Collection Trust; the Rijksmusuem, Amsterdam; the Metropolitan Museum of Art, New York; the Fitzwilliam Museum, Cambridge and there is a group of Clérisseau drawings made in Dalmatia at the Bibliothèque nationale de France, Paris, which were recently identified by the Croatian scholar, Dr Ana Šverko. 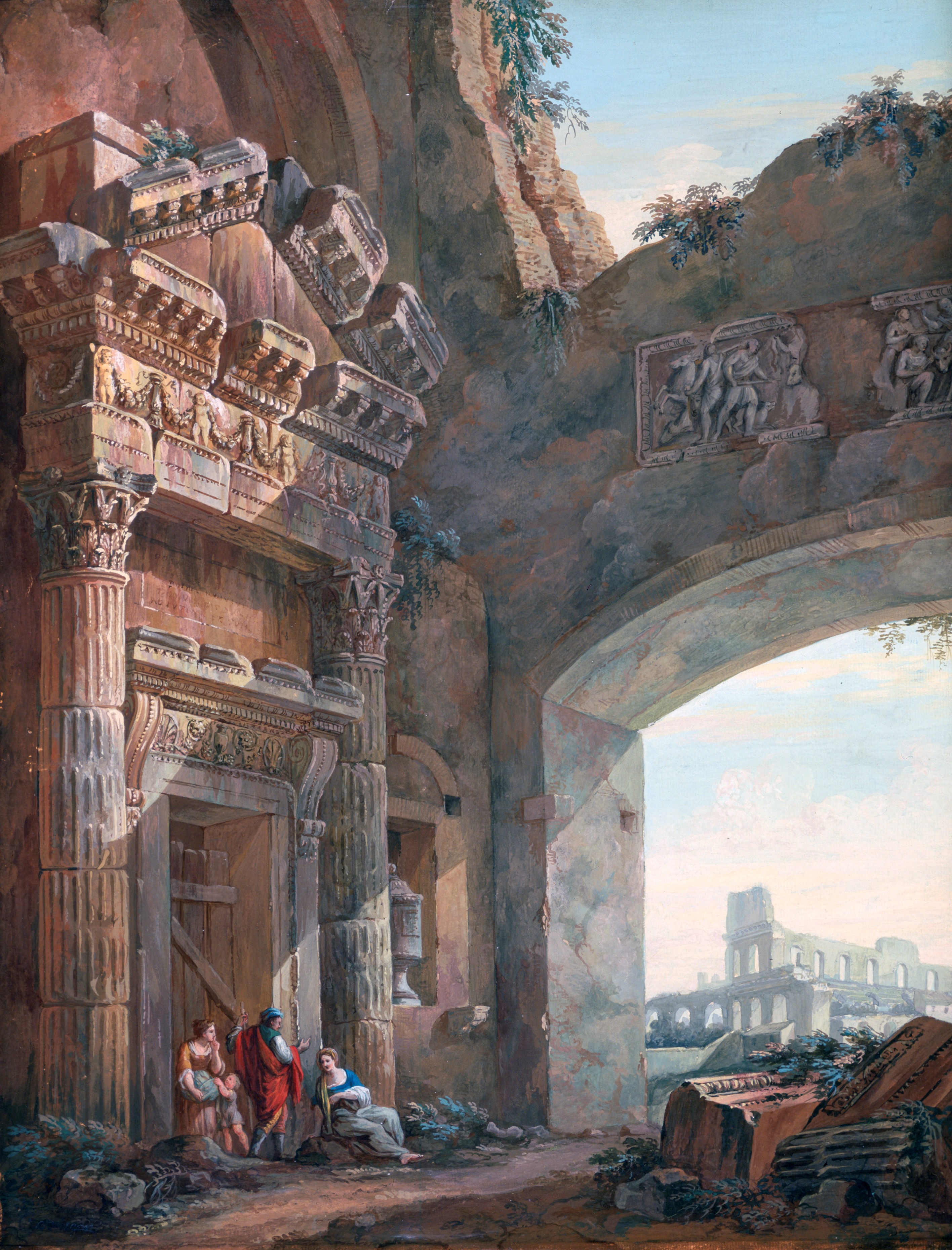 There are at least 65 drawings by or attributed to Clérisseau within the collection at Sir John Soane’s Museum. One of Soane’s earliest acquisition of drawings comprised 20 Clérisseau capricci, purchased in 1797, some of which can be seen hanging in his Picture Room. However, the bulk of the Clérisseau drawings at the Soane Museum came via the Adam brothers. Most of these were purchased by Soane at Christie’s in 1818 at a sale of the Adam brothers’ collection of artworks and antiquities, including much of the material from the brothers’ Grand Tours. Further to this, there are a small number of anomalous Clérisseau drawings within the Soane collection, for example a plan and section for the library at Lansdowne House.

Soane also purchased two copies of Clérisseau’s famous publication Antiquités de la France… There is a first edition copy of 1778 and an 1804 edition, probably purchased by Soane in 1815. While it was typical for Soane to purchase multiple copies in differing editions of his favourite books, in this instance, his reasons for purchasing the 1804 Clérisseau edition is elucidated by an inscription in Soane’s own hand on the title plate of the earlier, 1778 edition: ‘Imperfect; wanting pl. XXV.’

In France Clérisseau is celebrated as an influential antiquarian architect and artist. In Britain he is best known for his influence on Robert Adam. But on both sides of the Channel, he is remembered for his virtuosity in draughtsmanship and his extraordinary knowledge of antique architecture. While he is not considered to be a founding father of British neoclassicism, we might think of him as its favourite uncle.