Today is the 200th anniversary of George IV’s coronation on 19 July 1821 – the most lavish and expensive in English history.

George IV (previously the Prince Regent) ascended the throne on 29 January 1820, following the death of his father, George III. His coronation was originally scheduled for 1 August 1820, but was postponed when his estranged wife, Caroline of Brunswick, unexpectedly returned to England on 5 June to claim her right to be crowned as queen consort.

The arrangements in Westminster Hall and the Abbey were by long tradition the responsibility of the Office of Works, and Westminster Hall fell in Sir John Soane’s department as one of the three Attached Architects to the Office of Works. On 1 March 1820 Benjamin Stephenson, Surveyor-General, sent Soane several plans that related to the fitting up of Westminster Hall and Abbey for previous coronations. These are still in the collection. Soane however, declined to take on the work, declaring that he would ‘sink’ under the ‘frightful responsibility of the task’. The job was therefore allocated to Robert Browne, the Assistant Surveyor-General and J W Hiort, the Chief Examiner. Tellingly, Soane clearly did not expect to be taken at his word, as he complained afterwards that he had not been involved.

Scaffolding was erected in the Abbey to seat 4,656 guests, and in Westminster Hall galleries for 2,934 spectators of the coronation banquet, at which 1,268 people dined at 47 tables. 23 temporary kitchens were built adjacent to the Hall to produce the food. Inside the Hall a temporary triumphal arch was erected at the north end in the style of a medieval castle.

George wanted his coronation to outshine the sumptuous coronation of Napoleon. The preparation and furnishing of Westminster Hall cost £16,819; £11,810 was spent on jewels and plate, £44,939 on uniforms, robes and costumes (George insisted that participants dress in Tudor and Stuart period costume), and £25,184 on the banquet. The total cost was £238,000.

Arrangements on the day were extraordinarily complicated. As a printed circular in Soane’s Archive reveals, the doors of Westminster Hall and Abbey were to be opened at 3.00 am. ‘At the same hour all the Gates of Hyde Park, except the Kensington Gate will be opened for Carriages, and the Stable-Yard Gate will be opened for the passage of such Carriages as will be permitted to use the Second Route laid down in the Instructions. The Doors of the Hall and Abbey will be shut at Seven o’Clock in the Morning against all Visitors except those who are entitled to be set down at the House of Lords, and the Doors of that House will be shut at Eight o’clock. All Carriages are then to depart, and the Gates of the Park will be open at Three o’Clock in the Afternoon, to those which are to wait there for the return of their Owners, as stated in the Second and Third Routes. 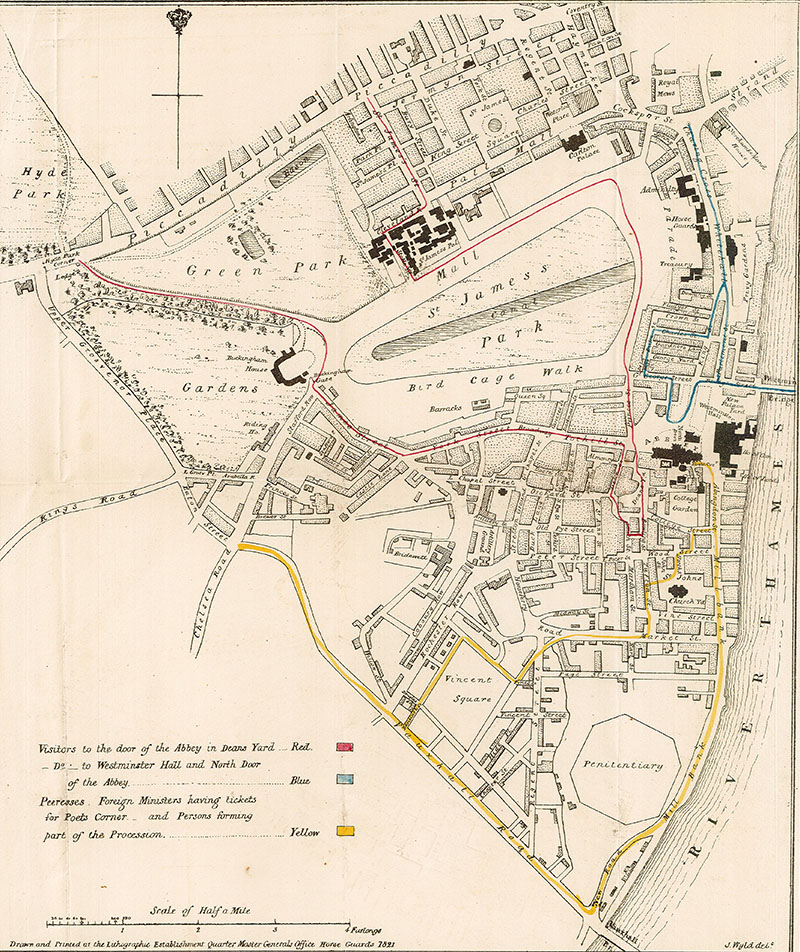 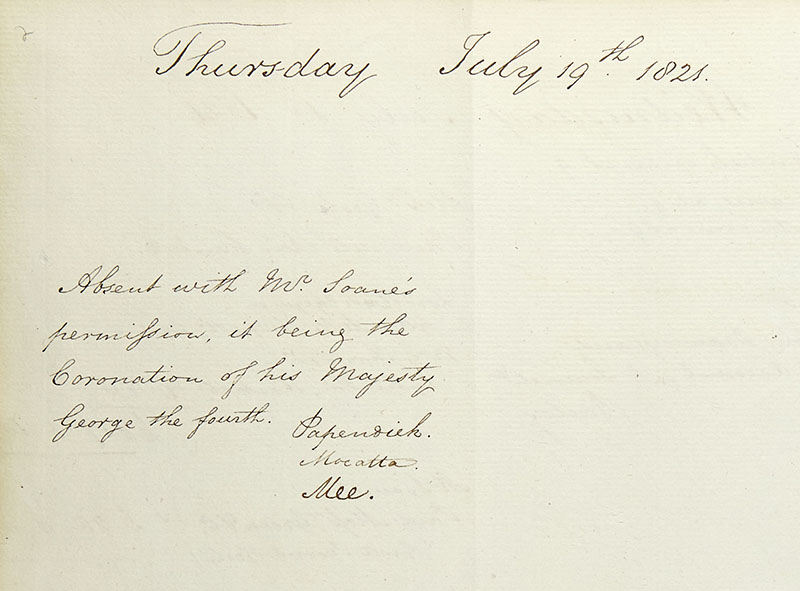 Soane was allocated six tickets for the coronation, though the entry in his diary for 19 July 1821 makes no mention of having attended it. We know from a surviving letter of thanks that he gave one ticket to the sister of his ex-pupil, Henry Parke, and it is probable that he gave away the others too. The pupils in his office were given a rare day off in honour of the occasion.

Soane’s design for the Illumination at the Bank of England for George III’s Jubilee in 1809. SM 10/1/1

Soane may not have been responsible for directing the fitting up of Westminster Hall and the Abbey but he did celebrate the coronation at the Bank of England, where he was Architect and Surveyor, with an Illumination of the Threadneedle Street elevation, involving 654 lamps, for which William Matthews, who supplied them, billed £195.17.4. There are no surviving drawings for these particular illuminations, but they are likely to have been a variation on his design for George III’s jubilee in 1809, described in one contemporary newspaper account thus: ‘An infinite number of lamps along the whole front of the building, alternating stars and wreaths, formed by lamps between the pillars “God Save the King”…’.

Want to hear more from the Soane?

Stay in touch with Sir John Soane's Museum by signing up to our Newsletter mailing list. Find out about upcoming exhibitions, events, digital resources and shop offers.